The Western Museum Association (WMA) is excited to bring visitors to Robert Smithson’s Spiral Jetty during a Pre-Conference Tour at the 2013 Annual Meeting. Read more about what’s in store… 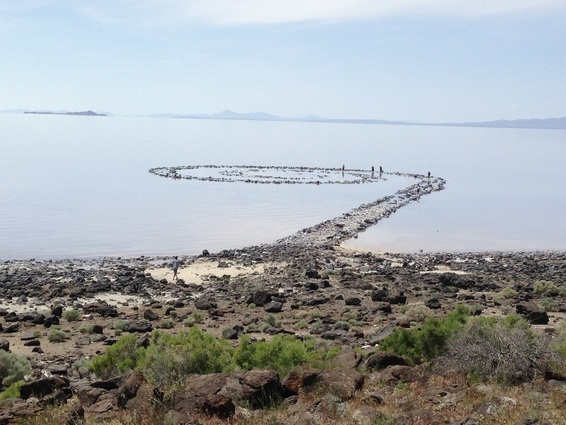 By the time the American artist Robert Smithson determined he wanted to create a monumental earthwork in the late 1960s, he was internationally recognized as a driving force in the Land art movement. His work using natural materials began in earnest in 1968 as he explored landscapes to create a new dialogue in sculpture. Wanting to expand the Site/Nonsite works he created, which created a dialogue between exterior (land) and interior (gallery or museum spaces), he began to plan a much larger work that would be singularly in and of the land.

For this work, he chose Utah. Smithson could have chosen many locations, including spots in Australia, or Bolivia, but for the work that ultimately became the Spiral Jetty (1970) he decided to stay in the United States. The first criterion was a location on or near a saline body of water, with water colored red. Having traveled the Western United States, he knew Great Salt Lake was both saline and often red. He traveled to Utah with his wife, the American artist Nancy Holt, to investigate the lake and available land.

After obtaining a permit through the Department of Natural Resources in Salt Lake City, and hiring a construction company, Smithson created the Spiral Jetty during April 1970. Over 6,650 tons of rocks and accompanying dirt and sand was displaced from the shoreline of Rozel Point to create the jetty: a 1,500-foot long, 15-foot wide counterclockwise spiral. 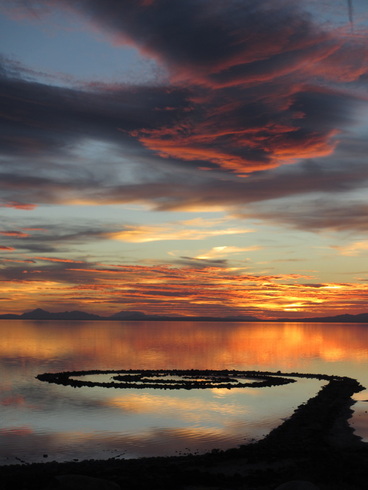 Many works created during the late 1960s and early 1970s during the Land art movement relied on documentation to survive due to the transitory nature of the art. The Spiral Jetty is still a vibrant and intact work of art, despite its location in a body of water that rises and falls regularly. Smithson chose the lake for salt and color, but also wanted a work that would interact in a dynamic environment. As the lake covers the jetty, then resides, salt is left on the rocks, sometimes covering them in glistening white. The lake’s surface is often described as calm and mirror-like, but storms can cause gale-force winds.

Smithson created a film about the earthwork, then wrote an essay: in each, he puts forth a directional scan of the environment from the center of the Spiral Jetty that begins: North – Mud, salt crystals, rocks, water. Moving through this mantra nineteen more times in a clockwise-rotation, repeating the same material content of his work, Smithson established the core substance of his work and the importance he placed on its site. As one is situated at the center of the Spiral Jetty, and slowly turns 100 degrees, the landscape unfolds to show remnants of an abandoned oil jetty, Promontory Range, several islands in Great Salt Lake, and the beauty of the Western sky.

The beauty of Rozel Point can be found in the sounds of its natural environment, in the American White Pelicans that fly over the region in undulating swoops and circles, in the scrubby flora underfoot. Large volcanic basalt rocks dot the landscape; geckos slither in the hot sun. All of this is part of the landscape introduced to us by Smithson as he created a monumental work that draws us to nature that unfolds with many levels of understanding the environment, which presents us with an unparalleled view of a lake that is forever changing. The Spiral Jetty is rooted in place, inviting us to journey to the site and encounter art in a landscape that is forever changing. 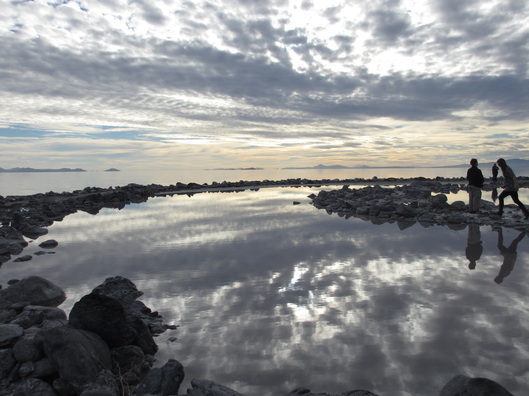 To register for this Tour at the 2013 Annual Meeting, please visit: http://www.regonline.com/WMA2013

Hikmet Sidney Loe works and teaches art history at Westminster College. Her research on Robert Smithson's earthwork the Spiral Jetty has led to a passionate interest in Land art. Her cumulative work on this subject, The Spiral Jetty Encyclo: Exploring Robert Smithson’s Earthwork through Time and Place, is forthcoming, as are several book chapters on the earthwork. She is a regular contributor to the online magazine 15 Bytes, lectures frequently on the Spiral Jetty and Nancy Holt’s earthwork Sun Tunnels and exhibits photographs related to the land. She has curated exhibitions at Westminster College, Finch Lane Gallery (Art Barn), and the Museum of Modern Art Library, New York.