Close your eyes for a moment and imagine a long hall, but not too long. Around you, you can hear the lapping of water against the shore, birds calling, an airplane flying over in the distance. The end of the hall is darkened save for a projection of a passing shoreline taking up the entire wall. You think you recognize it but you’re not sure. It draws you in with the slow, mesmerizing spanning over this shoreline, as you take a seat, either in a beanbag or leather couch, and relax for a moment. 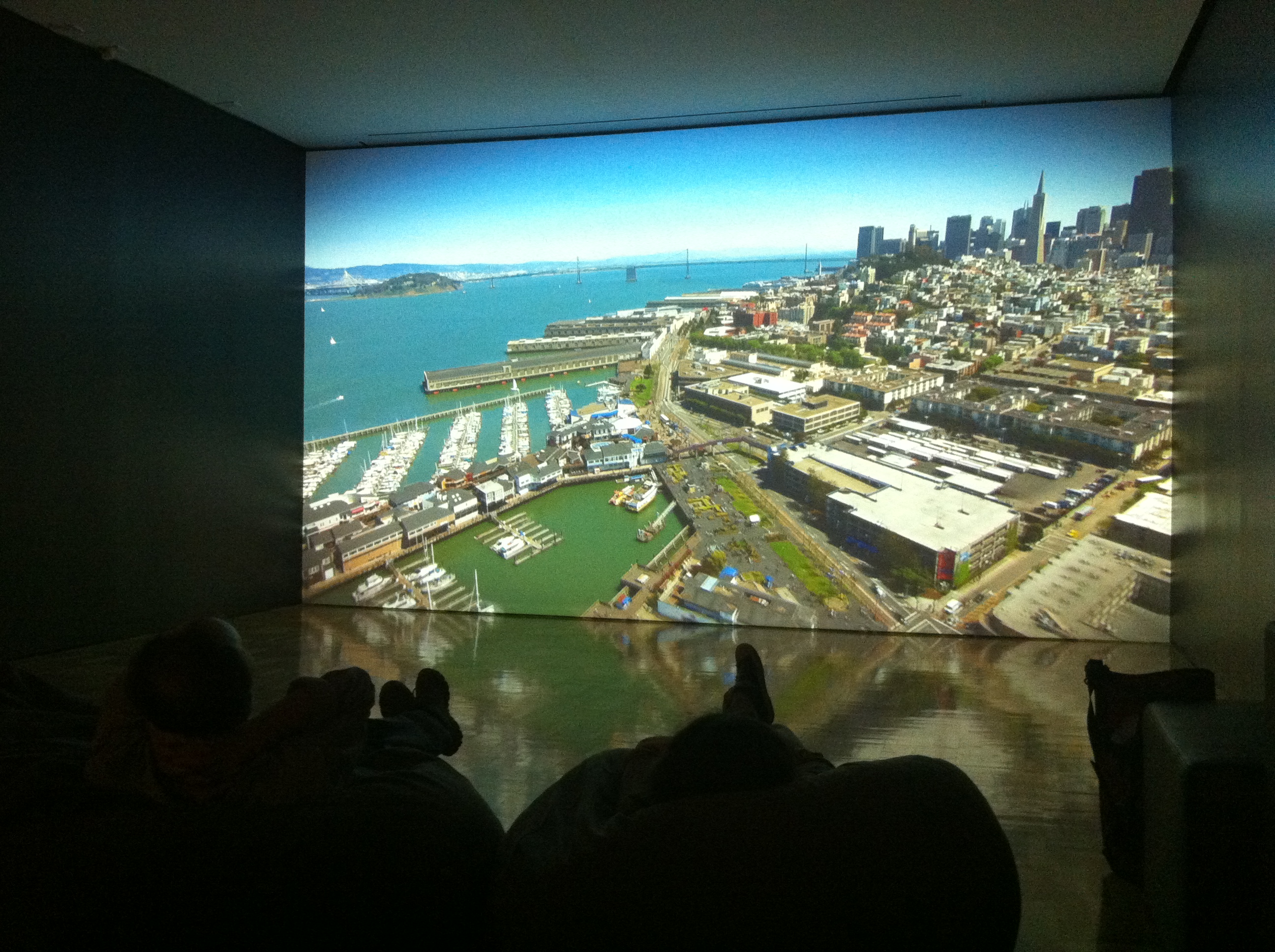 Immersed within the flyover looking above San Francisco’s marina heading towards Fisherman’s Wharf. A couple sits nestled in their beanbags for the three-hour tour.

The slow flyover passes over marshes, bridges, a fleet of empty World War II vessels, and even a very large hole in the ground right next to the water’s edge. This is the hybrid landscape that creates the shape of the San Francisco Bay. More often than not, the San Francisco Bay is a part of the horizon or a view outside our window as we drive by it or over it, secured within our closed vehicles.

Intrigue may pull you to wonder where you are around this expansive shoreline, but you won’t find any explanation except for title cards that appear throughout this three-hour tour. The lack of interpretation is very much intentional. Within the exhibition, Above and Below: Stories From Our Changing Bay at the Oakland Museum of California, you will come across this flyover shortly after visiting the “Below” section of the exhibition as a transitional space before entering the “Above” section. Each of these sections explores the interlocking stories humans have had and continue to have with the San Francisco Bay (Above and Below the waters). The intention of removing interpretation for the flyover was to force the viewer to look at the landscape and to introduce them to a surprisingly unfamiliar landscape despite our frequent viewings of it while driving, running, or cycling by it. 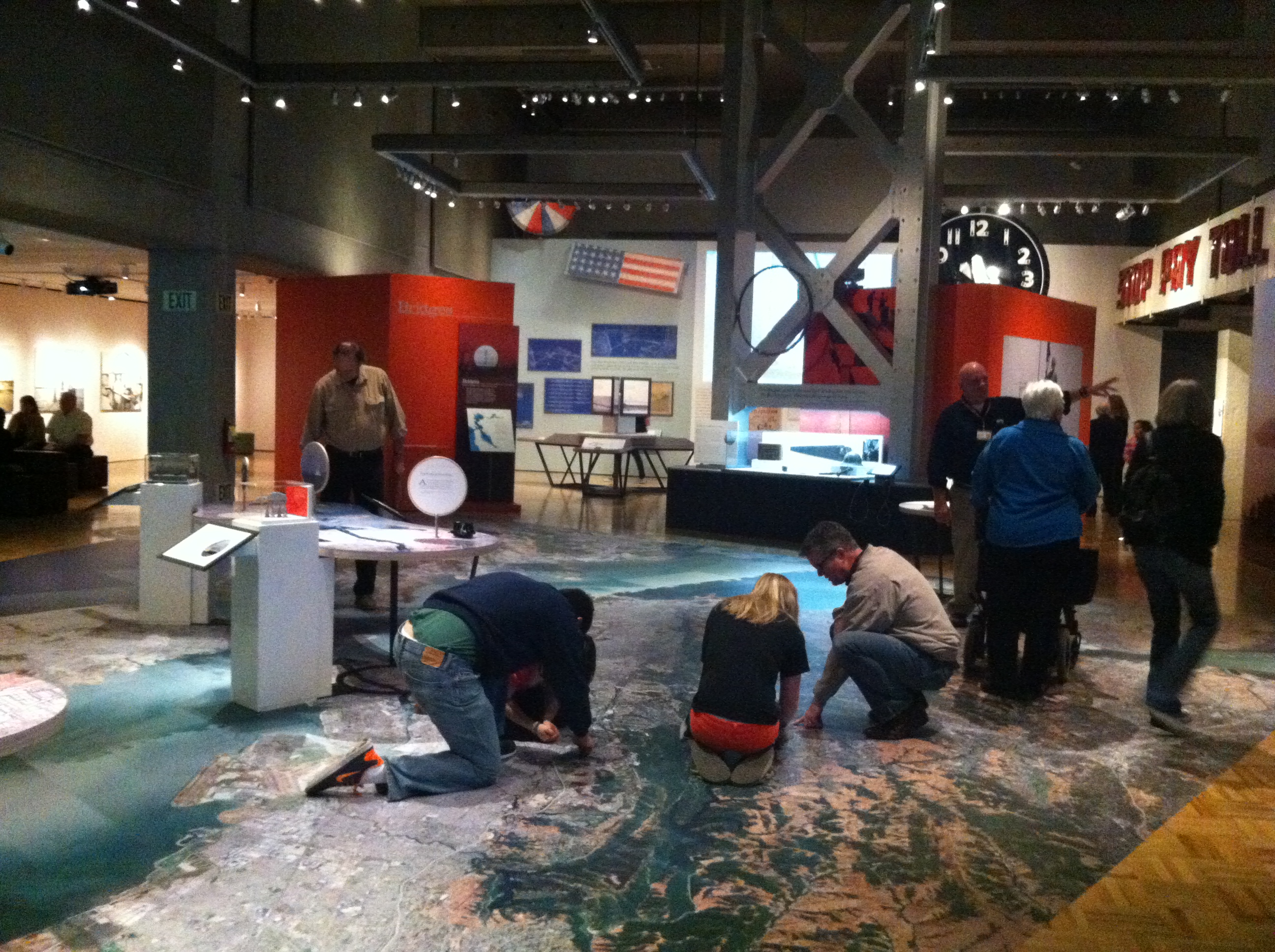 Within the Above section looking towards the story about the San Francisco-Oakland Bay Bridge. In the foreground is a large floor map of the entire Bay, which draws visitors to find familiar sites such as their house.

The film was commissioned from the Center for Land Use Interpretation (CLUI) whose mission is to raise awareness of how humans use the landscape. Appearing as a seamless flyover, CLUI filmed this from a helicopter at 500 feet with a steady speed of 70 miles per hour, negotiating permissions as they approached airways and occasionally landing to wipe the bugs from the lens.

However, the Bay is more than a view, its part of our “Bay Area,” identity, and is an equal character in a very complex story. The Bay is more unfamiliar than we might expect, so vast that you can’t see the entire expanse no matter where you stand. This flyover gives a new perspective to the seemingly familiar, tracing our history with this relatively young body of water.

For dwell-time, this is the most successful component of the exhibition. Visitors sit entranced by this calm exploration easily for 20 to 40 minutes; while writing this, a couple that had already been watching the film before I arrived, quietly talking between themselves, remained an hour later when I left. Time becomes meaningless as each person rediscovers what it means to live next to the largest estuary on the West Coast where 40% of California’s water drains.

At the opening of the exhibition, visitors were frustrated by not being able to track where they were around the Bay, but the team remained adamant that location wasn’t the point, it was to see the landscape. As the exhibition progressed over time, these comments subsided and now most of the discussions held between visitors are guessing…

Where they are, “I think that’s Tiburon;”

Pointing out experiences in locations, “That’s where I saw harbor porpoises;”

Waiting for key features to come up, “I want to see Candlestick [park];”

Or whispering general awe at the film, “This is so neat…wow.”

Large-scale photographs by Doug Adesko of people who work and live along the shoreline are hung nearby. The photographer, when taking each photograph, records the environmental sounds. This is then played over the installed photographs. It is the soundtrack of water lapping on the shore, shorebirds calling or an airplane flying over that, by coincidence, provides a beautiful companion to the film as if the sound was coming from the flyover itself. 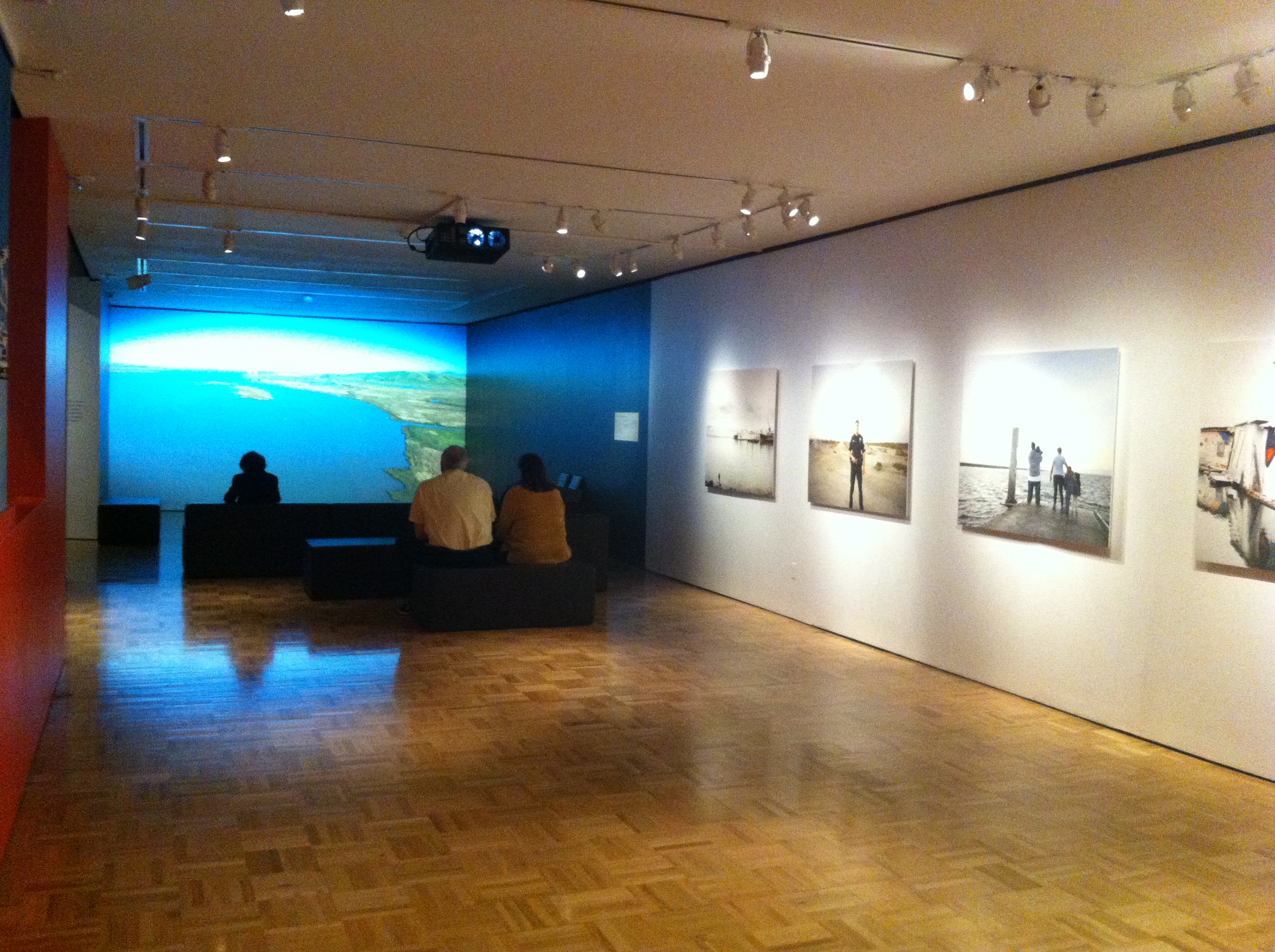 Looking towards the Flyover with Doug Adesko’s photographs along the wall. Playing overhead are the soundtracks from each photograph taken which compliments the flyover.

The primary message of this exhibition is to reflect on the complex relationship humans have had with the Bay. At first glance, it would appear that this relationship is one-sided, how we impacted the Bay; however taking a closer look, the nature of this Bay has also determined what we build and where. An excellent strategic location for military endeavors, ship yards where built where water next to the shore was deeper than the average depth of twelve feet or less. It is also this shallowness that makes it so easy to fill, shrinking the overall footprint of the Bay.

But the Bay cannot always be tamed. Since its most recent inundation 10,000 years ago, flooding what was once a river valley, the Bay has never stopped rising averaging some 2 cm a year. With the inevitability of sea level rise, the Bay calls us to its attention. We are all connected to this liquid landscape.

Perhaps there is no better way of expressing this than by sitting back and slowly flying over it.

The closing date for Above and Below is February 23, 2014. Learn more here.

Jennifer Miller received her MA in Museum Studies in 2011 with an advocacy for a Community of Practice with the visitor by restructuring how our institutions are organized and function. Jennifer strives to develop compelling stories centering on visitor experience. In each of her projects, she looks at all resources (from design, visitor flow, content, and objects) holistically as an advocate for the visitor's experience. For the exhibition Above and Below, Jennifer’s role was the acting Curatorial Assistant.

Images courtesy of the author.