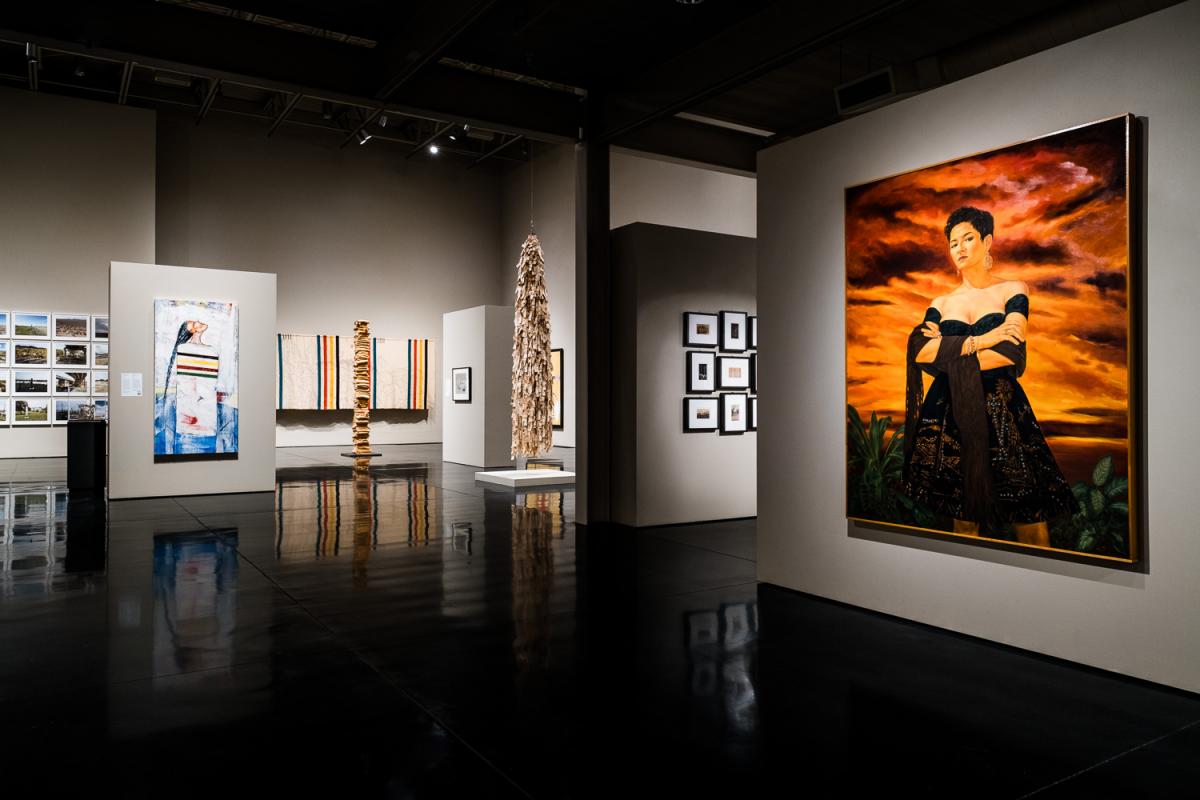 The Whatcom Museum is truly honored to receive the 2022 Charles Redd Center for Western Studies Award for Exhibition Excellence for Many Wests: Artists Shape an American Idea. We proudly accepted the award this past October at the Western Museums Association (WMA) 2022 Annual Meeting in Portland, Oregon.

Many Wests is the culmination of a multi-year Art Bridges initiative organized jointly by the Smithsonian American Art Museum and four nationally accredited art museums located in the West –  the Boise Art Museum in Boise, Idaho; the Jordan Schnitzer Museum of Art in Eugene, Oregon; the Utah Museum of Fine Arts in Salt Lake City; the Whatcom Museum in Bellingham, Washington; and the Smithsonian American Art Museum in Washington D.C. We recognize and thank these institutions for their dedicated involvement.

Bringing together artworks from the permanent collections of all five collaborating museums, Many Wests offers counterviews of “The West” through the perspective of forty-eight modern and contemporary artists. The eighty-seven artworks featured in the exhibition question old and racist clichés, examine sidelined histories, and illuminate the multiple communities and events that contribute to the past and present of this region.

Through strategies grounded in documentation, historical inquiry, cultural tradition, and aesthetic and material experimentation, the artists featured in Many Wests catalyze new understandings of a region and history that is often submerged in stereotype and distortion. Their works address the past and present, revealing that “The West” has always been a place of multiple stories, experiences, and cultures. 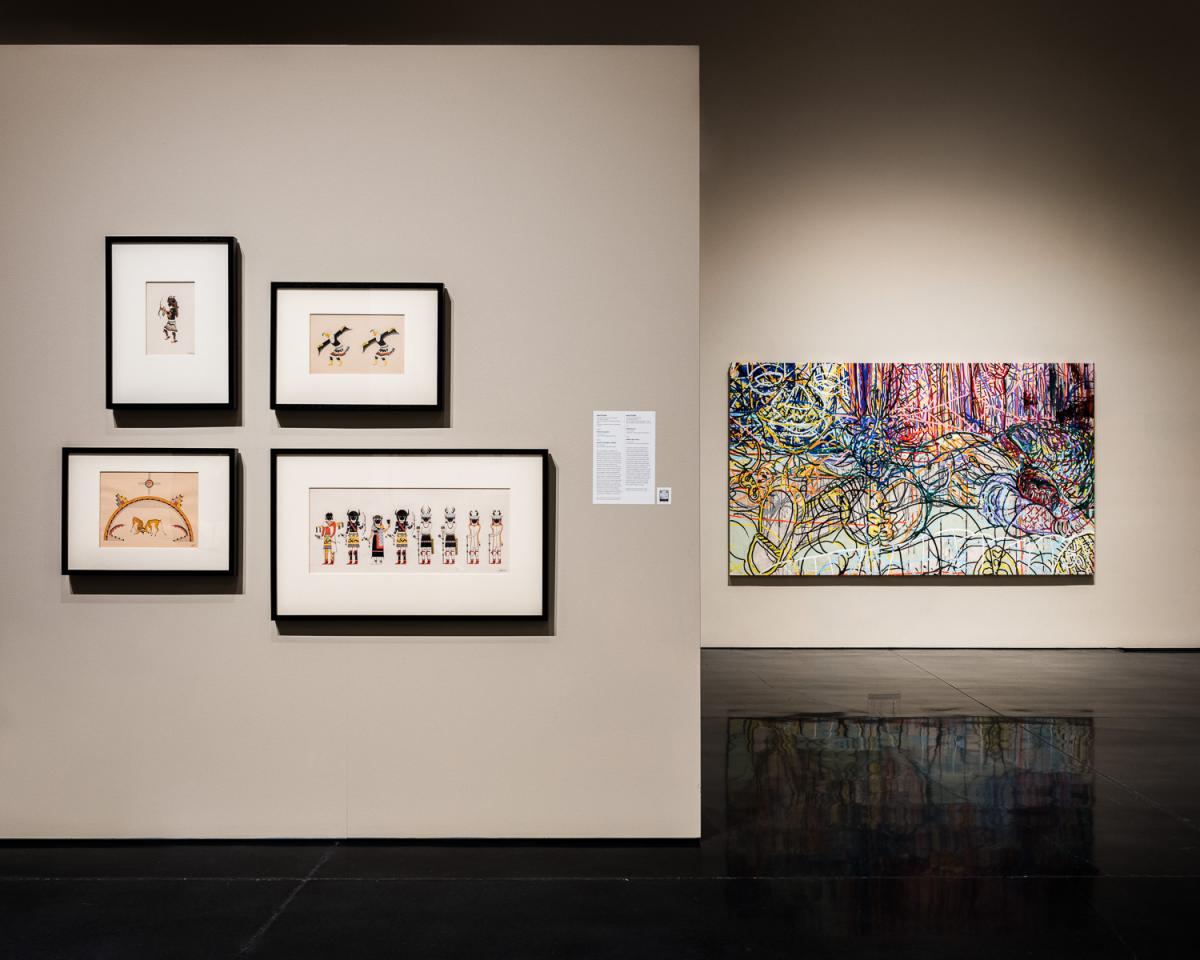 The exhibition is organized around three sections: “Caretakers,” “Memory Makers” and “Boundary Breakers.”  These overarching themes illuminate the different ways artists offer broader and more inclusive views of the West.

Caretakers redefine what it means to take care of themselves, their communities, and their futures. Through their work, these artists demonstrate a commitment to stewardship of land, history, language, and culture. They draw upon personal narratives, communal ties, and collective experience in the American West. Some of the featured artists include Patrick Nagatani, Laura Aguilar, Ka’ila Farrell-Smith (Klamath Modoc) and Marie Watt (Seneca).

Memory Makers act as transmitters of cultural memory as they give form to neglected histories of the West. They go beyond the familiar accounts of European settlers and bring to light lived experiences and identities that are essential to a truthful history. Some of the featured artists include Christina Fernandez, Jacob Lawrence, Ken Gonzales-Day, and Roger Shimomura.

Boundary Breakers unsettle common beliefs that inform the popular understanding of the American West. Their representations break away from myths and assert their continued presence despite centuries of omission and erasure by mainstream culture. They question simplified notions of identity, affirm their lived experiences, and refute romanticized imagery. Some of the featured artists include Wendy Red Star (Apsáalooke/ Crow), Raphael Montañez Ortiz, V. Maldonado, and Angela Ellsworth, among others. 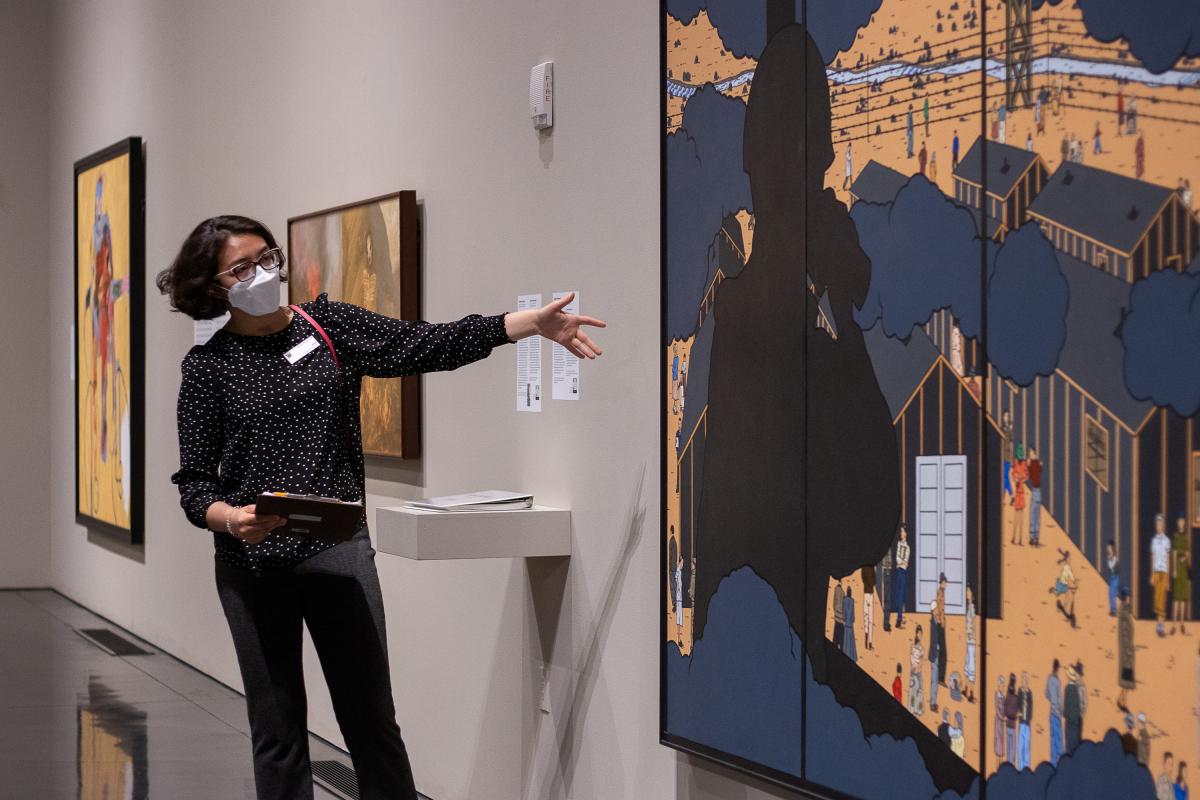 Welcoming New Audiences to Many Wests

With support from the SAAM + Art Bridges initiative, partner museums developed learning and engagement programming related to the exhibition and hosted professional learning opportunities across several years of the project’s development. These touchpoints have allowed for sustained collaboration, development of new interpretive strategies, and implementation of best practices for community engagement. This support offered Boise Art Museum the opportunity to host a multi-day Inclusive Exhibition Design workshop. These sessions were led by Sina Bahram, President of Prime Access Consulting, who shared a variety of workable inclusive design strategies, such as incorporating large print gallery guides and recorded visual descriptions of artworks accessed through QR codes, which were implemented for Many Wests.

During the Whatcom Museum’s showing, we focused on developing supported relationships with youth leaders in our community by initiating a Youth Docent Program which has evolved into a Youth Art Council since the close of the exhibition. This has involved the training and sustained participation of ten area high school students. The group regularly initiates a variety of youth centered programming at the museum such as hosting movie nights and developing their own interpretive strategies, like music playlists and podcast series to discuss exhibition themes. 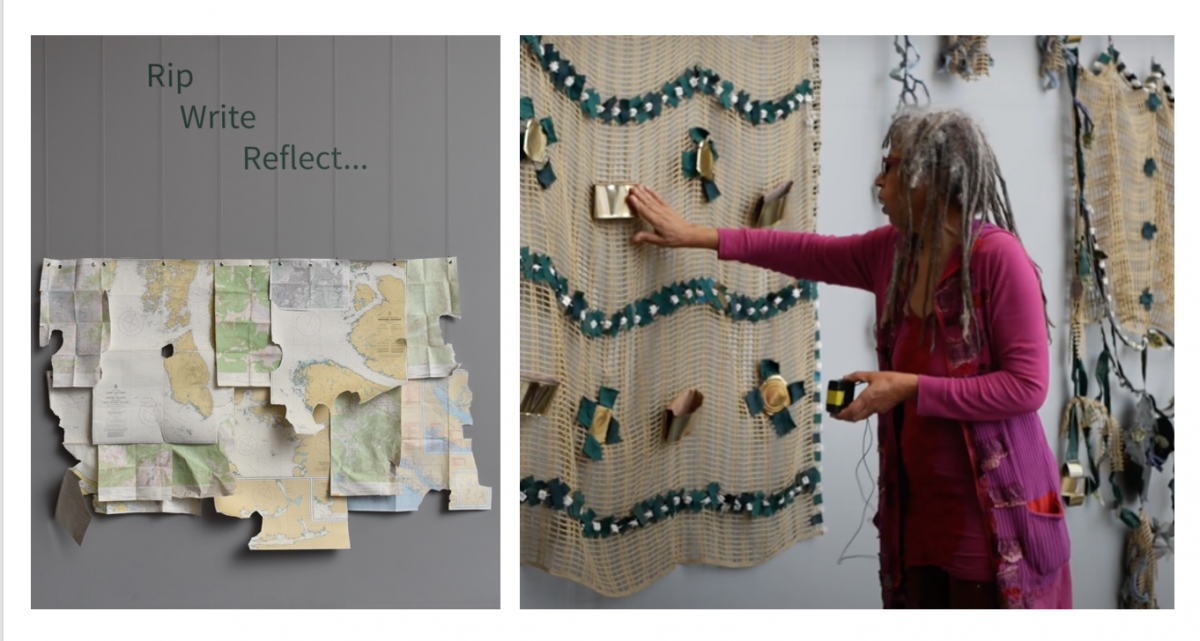 The Whatcom also invited exhibition artist Marita Dingus to create a new interactive artwork in response to the question “What does your West Look like?”

Dingus created a forty-foot-long wall sculpture made of recycled materials including tin cans from a salmon canning factory and the pleated corners of bedsheets acquired as cast-off material leftover from the making of pandemic-era scrubs. The piece served as an intriguing armature on which visitors could add their responses to the same question over the course of the exhibition’s five month run.

To emphasize that the West is more than a location on a map, visitors literally tore them up. On the scraps they wrote reflections that ranged from hopeful to critical to complicated, adding them to Marita’s wall piece. 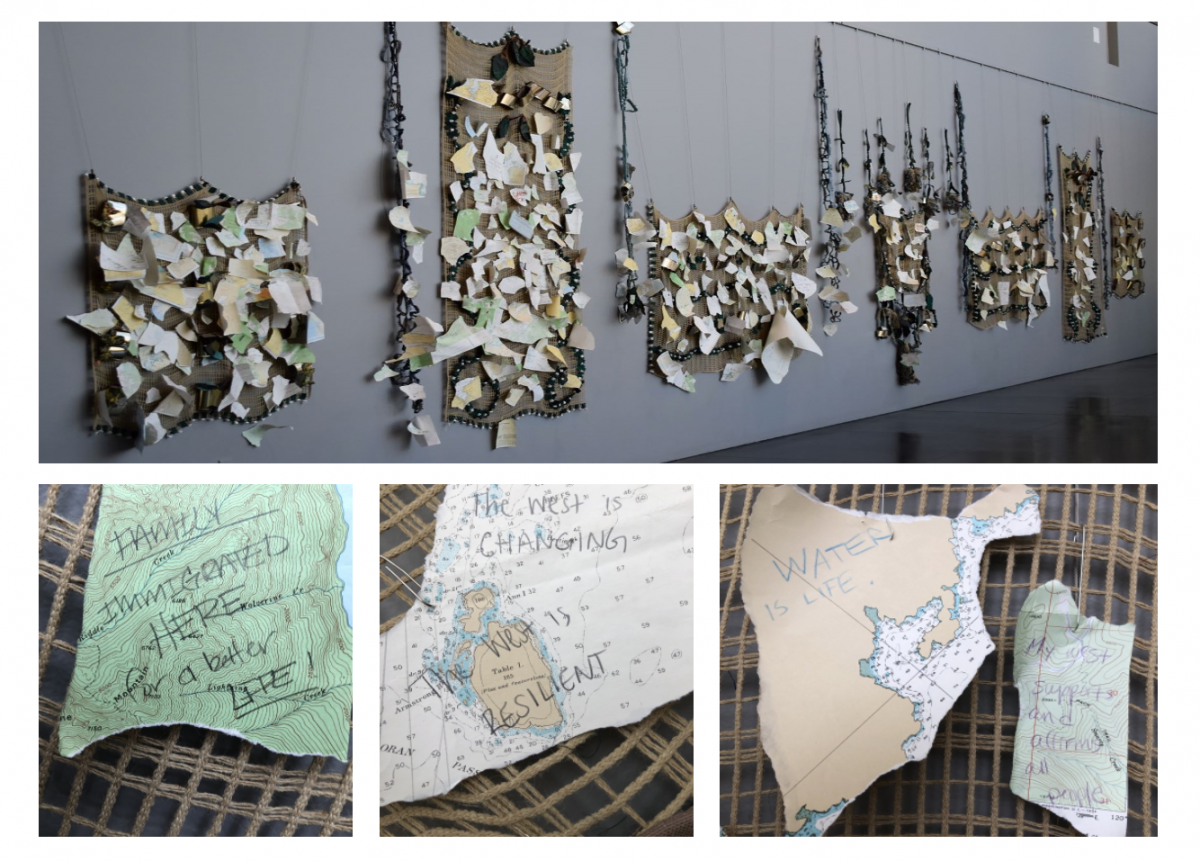 From poems to book suggestions, stories of love connections, personal redemption, and shame around the treatment of peoples and ecosystems, the comments were soul-baring and heartfelt. With hundreds of responses morphing into a deconstructed map wall by the close of the exhibition, the piece reminds us that there are indeed Many Wests.

On tour now through 2023, Many Wests: Artists Shape an American Idea is making a stop at each of the five collaborating institutions. There is still opportunity to experience the exhibition in person at its current showing in Eugene, Oregon, or at future showings in Salt Lake City and Washington D.C.

Amy Chaloupka is curator of art at the Whatcom Museum located in Bellingham, Washington. In addition to her colleagues at the Whatcom, Chaloupka wishes to thank the curatorial partners involved in the organization of Many Wests: Melanie Fales, executive director/CEO of the Boise Art Museum; Danielle Knapp, McCosh curator at the Jordan Schnitzer Museum of Art; Whitney Tassie, former senior curator and curator of modern and contemporary art at the Utah Museum of Fine Arts; E. Carmen Ramos, former curator of Latinx Art and Art Bridges Initiative Project Director; and Anne Hyland, the Art Bridges Initiative curatorial coordinator at the Smithsonian American Art Museum.