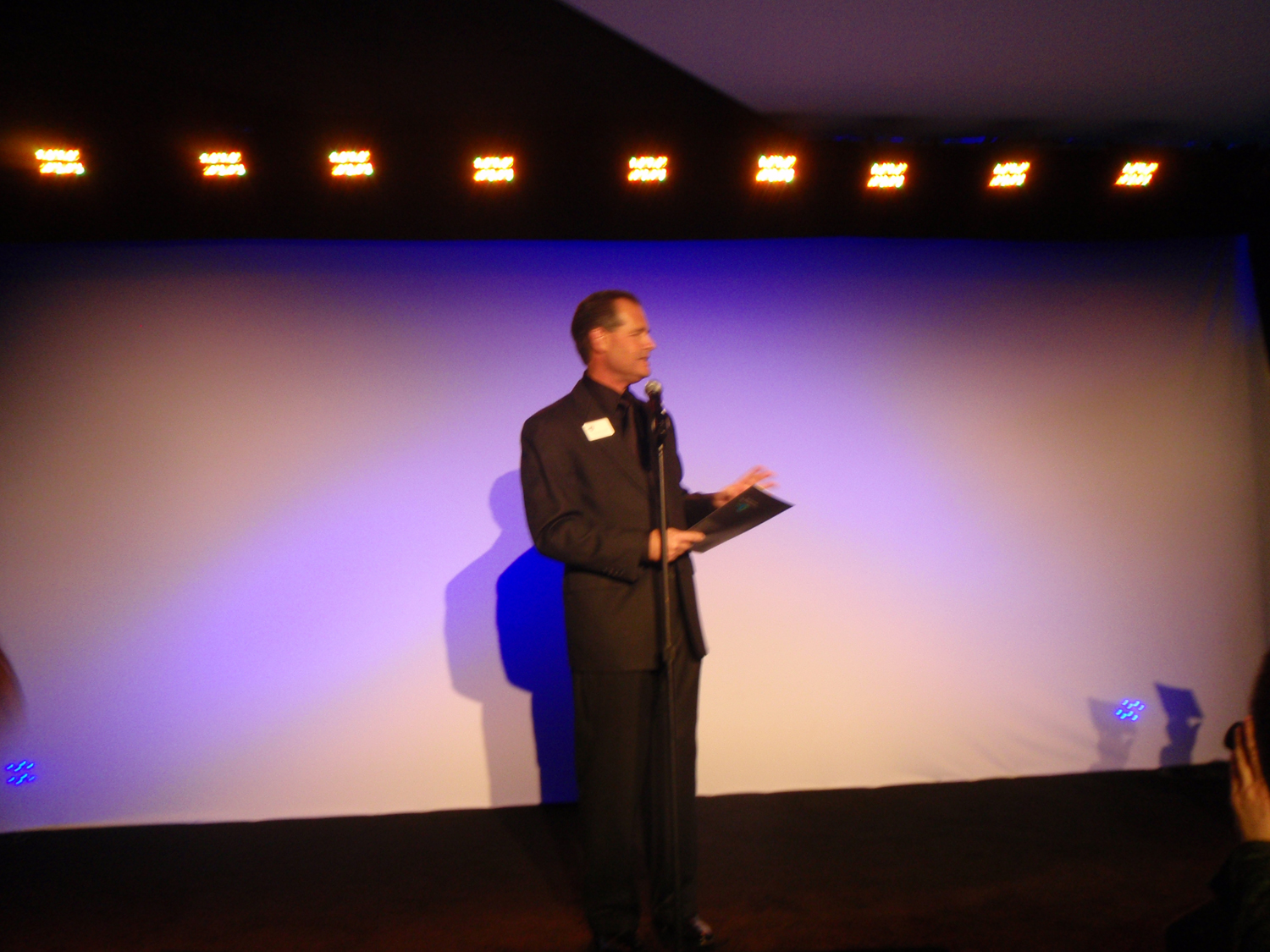 I was invited by Leonard Aube, the Foundation's LA Director, and former WMA board member, and extraordinary photographer of marine life (friend him on Facebook and you can check out his breathtaking images). I digress...

Leonard knows of my interest and dabbling in photography and was kind enough to provide me an invite to this coolest of cool openings.

The invitation arrived in the mail and thank goodness I've been working out the arms...the thing was thick heavy paperboard, a beautiful presentation.  This party was Wallis Annenberg's personal opening, before the real opening on March 27, incredibly impressive - from invite to entertainment.

Arriving on scene we were met by a cadre of security in dark sunglasses (is the President arriving soon??) and a crowd of paparazzi standing behind a rail waiting patiently for a starlet to step in front of the "Annenberg Space for Photography" backdrop...I realized uh huh, that's just like the event photographs I see on TMZ. I hesitated and gawked briefly in case Robert Pattinson might breeze in with his posse. No luck.

No luck, and no stars except for one a friend pointed out later as a character actor that I didn't recognize at all. 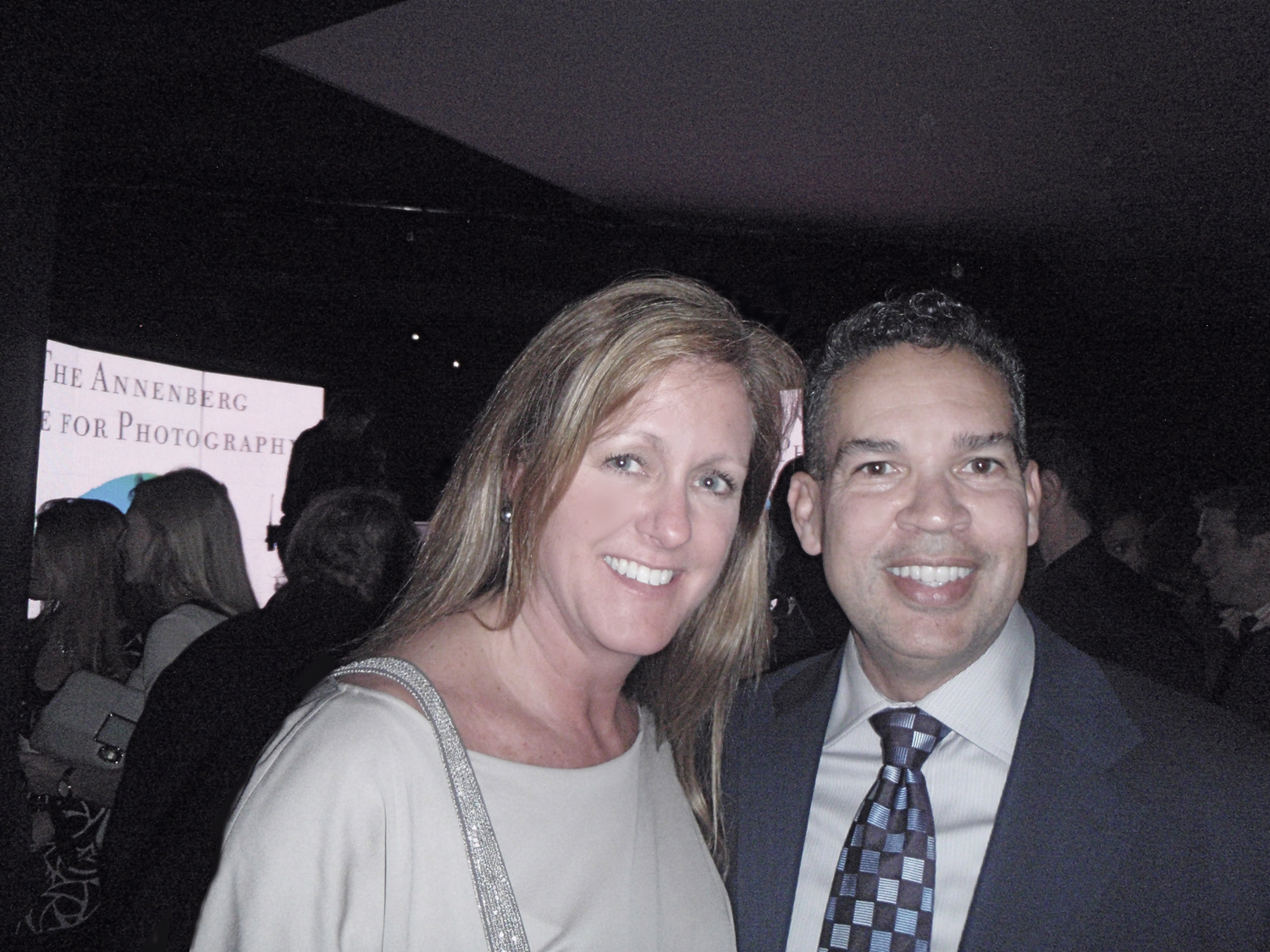 Inside the exhibit I immediately ran into WMA board member William Harris (a star in the museum field), a former colleague of Leonard's when Leonard was at the California Science Center. William was with Jeffrey Rudolph, Director of CSC admiring the exhibit "L8S ANG3LES" celebrating 11 local LA photographers.

I also had a conversation with Sidney Williams, the Palm Springs Art Museum associate curator of architecture & design and daughter-in-law of architect E. Stewart Williams (and host committee chair when WMA was in Palm Springs) who brought some colleagues from the desert to tour LA architecture and attend this exhibit.

In my museum celebrity spotting I also spied Charmaine Jefferson, director of the California African American Museum and host committee member for the WMA meeting in Pasadena in 2006 (detect a theme in my blog??) I'm sure there were more museum colleagues there, but the room became very club-like and at my advanced age...the music, lights and noise just sort of start to swirl and blend. 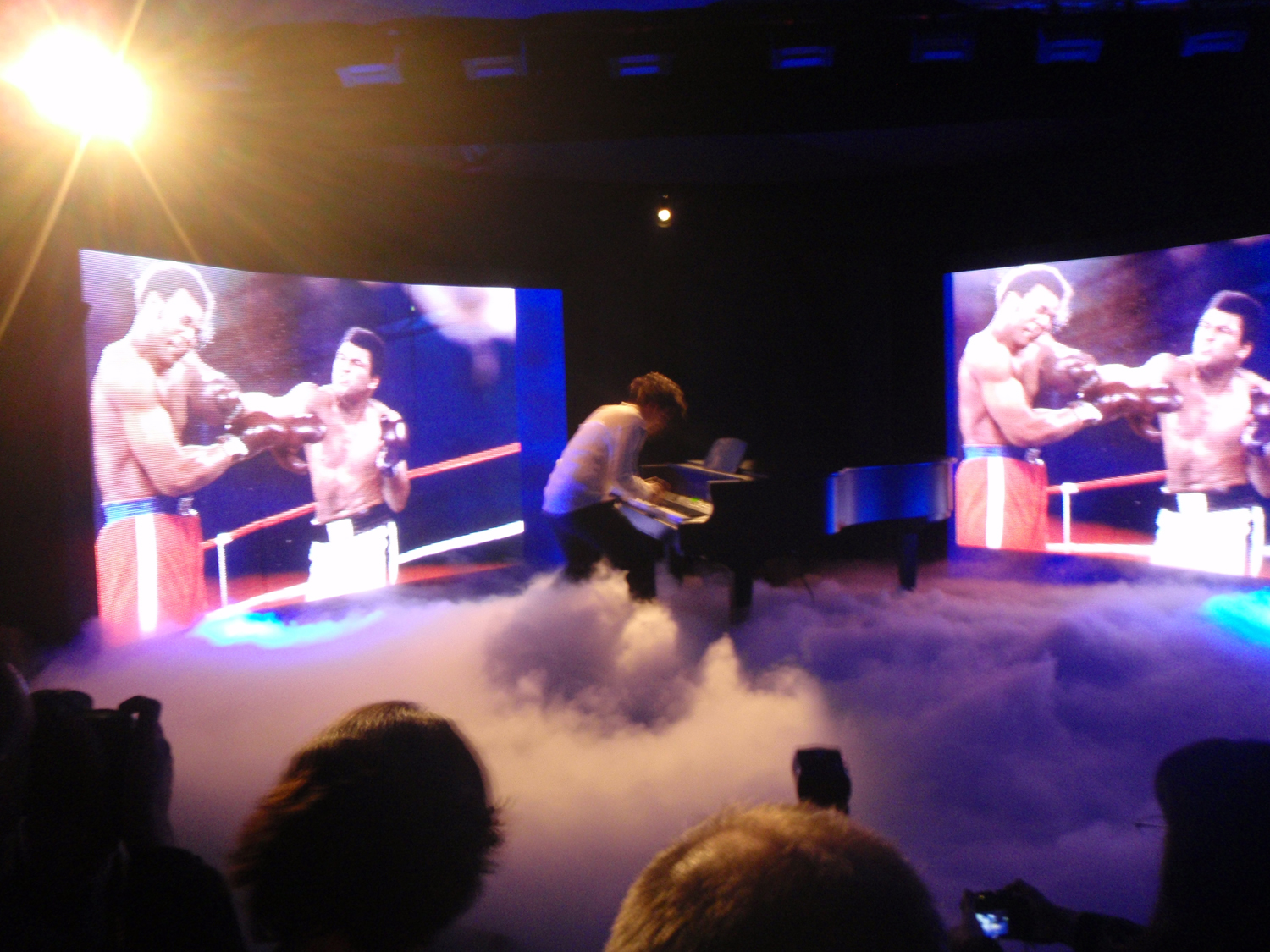 The building project itself was managed by Leonard Aube and it is nothing short of spectacular. It's a modest size, but it's finished beautifully - the main interior gallery space ceiling is a wood articulated camera shutter. In that same room are some large screens that show the breadth and depth of the current collection in a resolution three times greater than HDTV (according to a docent....but I was nearing my 2nd glass of wine, so don't quote me on that fact).

However, the twitter amongst the museum friends was the infamous kitchen in the middle of the museum. Yes, that's what I just wrote. I found it less than threatening, separate somewhat from the exhibit space...sort of. A really beautiful stainless kitchen that was so stunning, itself belongs in a museum. Wait. It is in a museum. 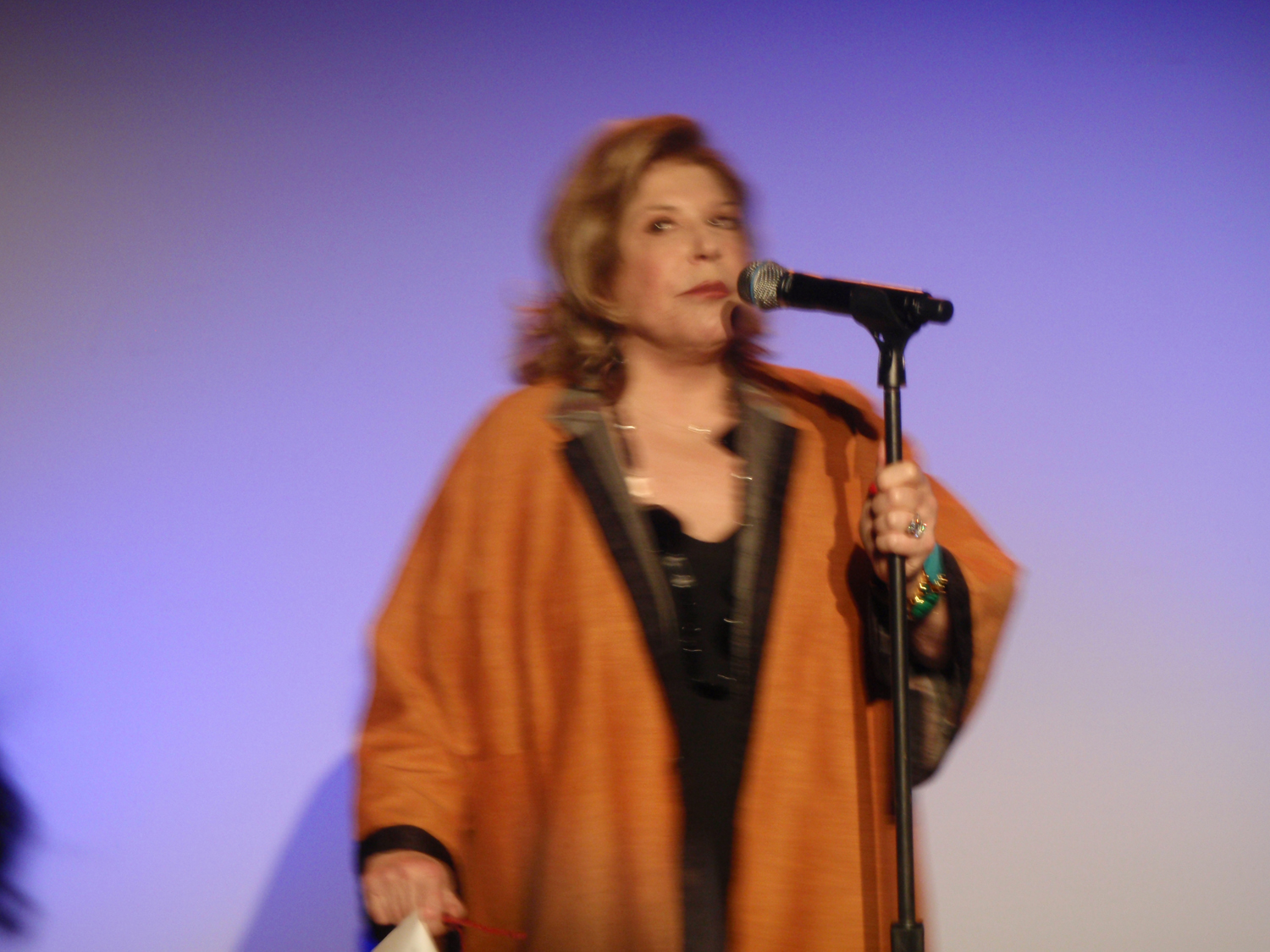 Later in the evening, Leonard was on stage thanking the crowd and thanking Wallis Annenberg, board chair of the Annenberg Foundation. Wallis, a gracious and generous philanthropist, and herself an avid photographer, was clearly delighted with the event.

She introduced Anne Wilkes Tucker, Special Advisor to the Annenberg Space for Photography and the Gus and Lyndall Wortham Curator of Photography at The Museum of Fine Arts, Houston.

Also introduced were several of the artist photographers....the exhibit details can be found at: annenbergspaceforphotography.org.

I want to hear more about the kitchen! Who gets to use it? Will it be open for people to nosh in anytime the exhibits are open? (You know people always end up congregating in the kitchen :).) Can ordinary folk sign up to host lunches and dinners with friends visiting the exhibit? If it is not just for "special events," but an ordinary part of the gallery experience, I am very interested to see how it affects the visitor dynamic--with each other and with the exhibits.

And thanks for the Hollywood reporter quality star coverage!

I asked Leonard Aube to respond about the kitchen. Everyone wants to know! It is a fantastic location for an event, and I just don't know what their rental program is...hopefully Leonard can fill us in.

Indeed, the kitchen (aka Wally's Cafe') has captured the attention of the photographic community and visitors to the Space alike.

When plans for the Space were still in infancy, the concept of designing a space within the Space for intimate dialogue with photographers, advocates, collectors, philanthropists and the like was initiated by Lauren.

In subsequent design and planning meetings-- which included numerous photographers--the concept of incorporating an intimate setting for reflection continued to emerge as a recurring theme. Before long and after overcoming significant design and code requirements the concept that all good parties wind up in the kitchen--stuck.

So Wally's Cafe' was not originally conceived as a wholly public feature of the Space. Instead, Wallis Annenberg and the other Foundation Directors will determine the 'who and what,' not unlike certain grant initiatives of the Foundation that are considered on an invitation-only basis.

At least for now, use and programming of the kitchen remains the realm of the Trustees. The first event, however, has been planned.

Wally's Cafe' will be 'christened' in a few weeks by photographers Greg Gorman and Catherine Opie, two of the headliners in the "L8s Ang3les" exhibition. Greg is famous for his celebrity portraits; Catherine for challenging conventions of beauty and fame. In addition to being superlative photographers, each claims to make a mean pasta sauce! So over plates of linguini the next phase of provocative conversation will begin.

Like any new venture we expect the Annenberg Space for Photography (www.annenbergspaceforphotography.org) will undergo continuous refinement and improvement. At some point we do expect that Wally's Cafe will find its way into the overall public experience. Accordingly, we encourage interested parties to stay tuned.