Big congratulations to Chris Alexander and the San Jose Museum of Art for being a 2009 Muse Award Winners in the category of Public Relations and Development. They won GOLD for Road Trip: The Giant Artichoke.  [Author's note: This just in from Chris Alexander --

Thank for the shout out! It was definitely a group effort however with myself; Lucy Larson, Manager of Interpretation; our Director of Marketing and the curator of the exhibition Kristen Evangelista. 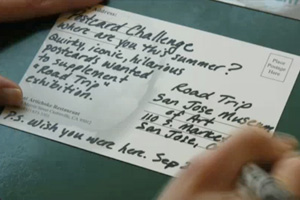 According to the AAM site, "Entries include press, marketing, and donor development pieces. Could include email newsletters, viral marketing campaigns, fundraising videos, etc."

From the AAM Media and Technology site:
Judges said:
This quirky video was produced in-house by San Jose Museum of Art staff armed with only a sense of humor, a video camera, and some crazy Japanese high-heels. The short clip depicts a journey to the fabulous Giant Artichoke restaurant, where a postcard is purchased and sent the to museum for inclusion in the "Road Trip" exhibition. Viewers are then prompted to send their own iconic, unusual, and hilarious postcards to supplement the museum's "Road Trip" exhibition." The judges were impressed with the innovative, low-cost, and appropriate use of technology to reach a large audience and engage people with the exhibition beyond the walls of the museum. Both the idea and the execution are fun, creative, and playful and show that the museum is both scrappy and savvy about engaging with visitors and successfully integrating experiences between online and offline presences.

Producers said:
The Giant Artichoke Video features a wild shoe-wearing traveler on a road trip to Castroville, CA who visits a quirky landmark and sends a postcard to SJMA. Created for the exhibition Road Trip and capitalizing on the common experience of a summer road trip, the goals of this hybrid marketing and interpretation project were threefold: to create buzz around the exhibition, sow the seeds for a participatory experience both outside and inside the Museum, and build connections between the Museum's online audience and onsite visitors.

Articles promoting the exhibition and video were featured on websites such as Road Trip America, uploaded to the museum's server, SJMA's YouTube Channel, and iTunes. Utilizing these online portals for audience development, the video reached new audiences previously unfamiliar with SJMA. The video was selected by You Tube as one of their featured videos, which in turn resulted in over 82,000 views and hundreds of postcards arriving from around the world—ranging from the SPAM Museum to the Eiffel Tower. During the exhibition, the video was shown in the gallery alongside the received postcards. An art-making station where visitors could make a postcard, which was stamped and mailed, furthered the viral reach outside the Museum.
California and Bay Area folks have known about this important project for a while. Nice to see this work get national recognition! View Chris' Slideshare presentation from Cultural Connections below.

Thank for the shout out! It was definitely a group effort however with myself; Lucy Larson, Manager of Interpretation; our Director of Marketing and the curator of the exhibition Kristen Evangelista.