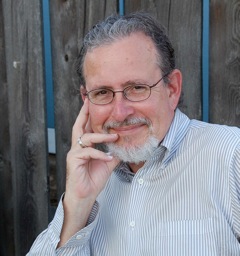 The economic downturn of the past eighteen months led to declining revenue from ticket sales and contributions to Clackamas Heritage Partners (CHP) which operates the End of the Oregon Trail Interpretive Center and two other sites in Oregon City.   In March and April we were forced to suspend our operations while we attempted to raise funds to continue.

A very strong positive community response allowed us to reopen our doors at the beginning of May.   However, we were still dependent on healthy ticket and retail numbers through the summer tourism season.  We scheduled several large public events, had County support in marketing the fact that we were open, and mounted volunteer outreach in the community.   Despite those efforts, our ticket sales and related revenues have continued to decline this summer, leaving us few choices.

Faced with the numbers, the CHP board notified Oregon City that we are not able to continue to manage the End of the Oregon Trail Interpretive Center facility after Labor Day.

Staff layoffs will take place in most departments.  The Visitor Information Center at the End of the Oregon Trail site will continue to be open as long as funding continues.  Additionally, CHP will continue its custody of the collections and research library at the Museum of the Oregon Territory and volunteers will continue to work at the Stevens Crawford House at least through year-end.

The City of Oregon City commissioned a study of CHP's operations in March to evaluate actions that would make CHP more successful. That report, made by the economic analysis firm, AKT, was released two weeks ago -- http://www.orcity.org/citymanager/clackamas-heritage-partners-report 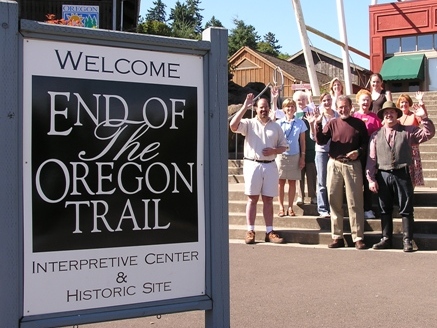 The End of the Oregon Trail site has drawn from 30,000 to 60,000 visitors annually and employed more than a dozen staff.  The facility was originally intended as an interim interpretive experience to serve visitors until a larger, multimillion-dollar facility master planned by regional partners was constructed. The larger project never gained traction, and the existing facility faced increasing challenges of aging infrastructure and limited attendance.

The report further states that CHP would need nearly $ 2 million annually and further millions in upgrade and repair to its facilities in order to operate at full capacity.   Clackamas Heritage Partners Board praised the City for undertaking the AKT study and endorsed its recommendations.   However funding at the recommended levels appears unlikely.

The End of the Oregon Trail Interpretive Center is one of five heritage facilities built in the 1990s in Oregon on the occasion of the Sesquicentennial of the Oregon Trail.   A second facility, The Columbia Gorge Discovery Center in The Dalles in central Oregon has attempted to work through struggles related to sustainability with the help of an Oregon Solutions Team.

Oregon Solutions is a program created by the Governor's office to help communities with struggling institutions.    Team efforts are recounted in the website at - http://orsolutions.org/central/gorgediscover.htm

As summer ended, the Board of Trustees of the Southern Oregon Historical Society announced that it will suspend most public operations for a period of six months in order to restructure the organization. This is in response to a financial crisis that has been in the making since the Society lost all of its county funding in 2007.

The actions were summarized in a message from Executive Director Allison Weiss.  “The Society is not closing; it is reorganizing in order to develop a plan that will ensure the Society is financially sustainable and relevant to the community. All museum properties located in Jacksonville will close to the public on Sept. 7, as will the Research Library in Medford.  The Children's Museum in Jacksonville will be open to scheduled school groups.  Hanley Farm will continue to operate in order to complete the fall farmers market season and host the annual Harvest Festival and Pumpkin Patch, all activities that bring in people and revenue.”

"It surprises me how few people know that the Society receives no funding from the county," said Weiss, who was brought in to run SOHS in July.  “We have tried to maintain an operation that was once operating on a $2 million budget with 40 full time staff people. We are now down to six full time staff members and a fraction of the prior budget yet for the past year, we have tried to keep open all of the facilities. We have nearly depleted the line of credit and have exhausted the staff; many of whom were working 60 hours a week to keep the properties open to the public.  Two years ago the Society took a $600,000 line of credit against the History Center in Medford.”

During the time that the Society will be closed, the organization will be restructured. Key to this is negotiating with Jackson County to amend the lease on the Jacksonville properties. The Society is seven years into a 50-year lease through which the county leased six historic properties to the Society for $1 a year.   The Society in turn was to provide maintenance and upkeep on the facilities.  The historical society itself is not dissolving and intends to work toward development of programs that can be sustained.   More information can be found at -- www.sohs.org 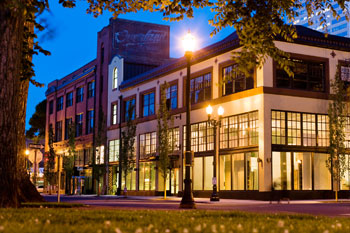 Word comes more anecdotally from other institutions across the state which have cut hours and positions, or made even more dramatic changes.   The first large museum to face a fiscal crisis was the brand new Museum of Contemporary Craft which had opened just months earlier to great fanfare but then found its financial circumstances in a death spiral.   Integration with another institution, PNCA, provided a solution, but the size of the problem gave Portland's cultural community pause.  It was clear that large institutions were also at risk.

During Oregon's legislative session, the statewide budget crisis led to a skimming of revenues from Oregon's visionary Cultural Trust, although no money was taken from the Trust's corpus.   And the Oregon Historical Society and Portland Art Museum, two of the largest and most venerable cultural organizations in Oregon, both saw the state funds they had counted on in recent years cut.   Both had some funding restored in the final hours of the session through the “Christmas Tree” bill.   But the bottom line was still cuts.   Oregon did authorize a new  “Pacific Wonderland” retro license plate, which could provide a funding stream down the road.  However, the situation remains problematic. 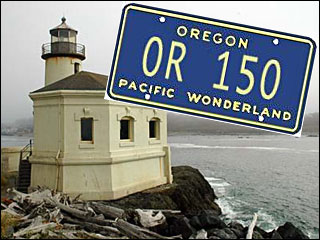 The demise of my organization's operations in Oregon City did not come as a surprise to our Board of Directors or myself.   In 2004, an organizational assessment by a heritage tourism consultant led us to integrate three separate entities into Clackamas Heritage Partners.  That allowed us to achieve economies of scale, pay of the indebtedness of the small partners, invest in much-needed capital repairs and market our organization's exhibits and interpretive presentations as an integrated product.

Despite these achievements, by 2006 we could see that we were still too dependent on earned revenues and continuing to face ever-mounting maintenance and repair costs in aging facilities.    We began working on a plan that would have created a new level of heritage attraction in Oregon City, but through two years of exploration, design work, and economic evaluation were still too far from bringing product online when the economy nudged us toward the brink.  The plans we had developed for reclaiming access to Willamette Falls, the second largest waterfall in the United States, still have substance, and we hope that some future heritage leaders will carry them to fruition.

In the meantime,  to help avoid similar problems, I hope that colleagues can benefit from the work that was done to analyze our travails.   The AKT study contains analyses that apply to other organizations than ours.

Thank you David for a candid, beautifully written and thought-provoking piece. We appreciate your experience and leadership in our museum world.... especially in your continuing role for the WMA Board, along with your years as our President. We will anticipate a happy future as well as a solid and positive fiscal resolution for End of the Oregon Trail Interpretive Center. My best to you and your colleagues.

This is a really intense read and so necessary right now, especially for us to look at this as a field. Thank you for your frankness and open approach.

THIS is why so many say that 'museum people are the best people...,' right?

thanks for taking the time to craft this for others to benefit.

I wish Clackamas Heritage Partners the best of luck during this time of recharging and refueling, and I hope that CHP comes out restructured and with a leg up in this fight to continue contributing to the community.

I look forward to following the Society in the upcoming months and hope that someday soon I'll have the opportunity to visit the End of the Oregon Trail Interpretive Center & Historic Site!

David,
I am so sorry to read this and wish you all the best as you traverse this difficult path.

This kind of clear eyed assessment is our best hope for pulling ourselves up and out of the economic collapse. David, thank you.