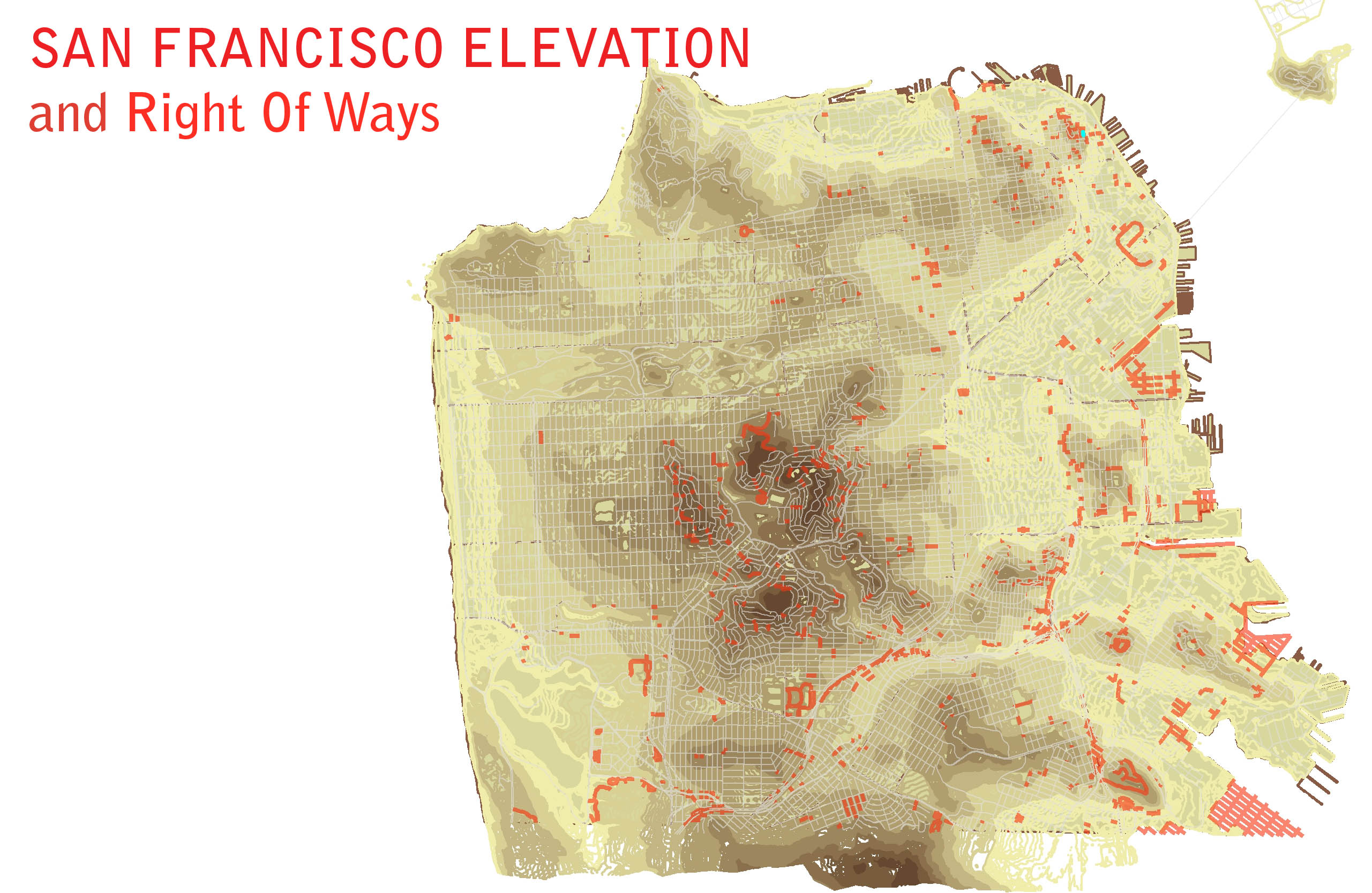 Before I came to San Francisco for Seb’s talk, I read a post on SFStreetsblog called “Eyes on the Street: The Ghost Streets of San Francisco” about ‘secret’ right-of-ways around town. You know, those steep steps that lead through an art garden or behind a house, where you’re never sure if you’re on public or private property. Being a map person, I majorly geeked out: I downloaded the San Francisco street centerline GIS shapefile, sorted the attributes by class code, added an elevation map, located the SFMOMA, and plotted my little adventure!

It only took an hour... and all with publicly available data! I’ll admit, before Seb’s talk, I would not have considered this  little exercise more than pre-trip geekery. What Seb highlighted was the fact that this is happening all over the place, all the time, with an ever increasing availability of data. Folks like me, with interests in snooping around urban nooks, are taking what's out there and making it their own.

I’m always excited to see what emerges with maps and public data. My name is Lesley. I’m the Curator of GIS at the Minnesota Historical Society. A funny title, right? I’m not lucky enough to rest on the laurels of a historic title like Curator of Art. You guys have it easy!

As the Curator of GIS, I spend a good amount of time mulling over the quandary of archiving born digital material. But I spend even more time thinking about place… as you can imagine.

So, I was especially excited to see the Powerhouse Census Explorer, and their new Collections Mapping interface. It’s a direction we’ve been heading in for a while. A couple of years ago we launched something in a similar vein. But rather than use the maps as a background to collections data, we wanted the layers of MAPS to tell the stories themselves. We gathered the available GIS layers from state agencies and created an online GIS tool for school kids to layer up to 150 transparent maps atop each other.

For example, 6th grade classes studying immigration could see areas where people settled, with maps of soil productivity, original vegetation, and natural disasters overlaid atop. At the end of the day, an average kid could say, “Why yes, the Germans Did take up the heavily mollisol area, because they Are good at Farming, but Too Bad, they lost their crops to a grasshopper plague when trying to tame the Prairie!”

Throughout the Minnesota Historical Society, we’re engaging ‘place’. We've tweeted photos like the White Castle on Wheels, asking followers Where was This? We have a wiki about place, called Placeography, for the public to add content about places in their own lives. We're experimenting with fun little KMZ files to see our historic map collection in Google Earth, and we’ve even got a searchable database of Minnesota placenames. I’ve found that it’s one thing to geotag land-based objects, like maps, or things that don’t move, like buildings (oh, nevermind White Castle). That stuff is FAIRLY straightforward. But it’s a whole other thing to talk about geocoding collections. I imagine Seb and his team are working through some of the same things we are.

I think we’ll all agree, when collections get digitized and put ‘out there’ they can become imbued with new life. New contexts are discovered, old stories are told. Take the fireman’s hat that gets recognized when it’s put online. Before, its provenience is listed only as Minneapolis Fire Station No 18, circa 1920. But suddenly, with recognition, the hat has a head it belonged to. Fires it fought, cats it rescued. Thinking somewhat philosophically, how would we place this canary yellow No18 hard hat on a map? Certainly it could be located at the old station (now an artist’s loft). Or at the fireman’s house (his daughter still lives there, even better). Or at that big blaze down on Lexington where ten lives were saved in a moment.

Digitizing a collection lets us see its multidimensionality. Here’s where this principle of whakapapa fits in, I think. My take on whakapapa is that objects, like people, carry history with them; each has a genealogy of life and place. Thinking this way about collections fits with the semantic web and can be somewhat confounding for old school curators.  But it may help us take a step closer to understanding the layers our collections have and create when we put them out there.

Wow! I love what you guys are doing with maps. All this talk of the layers and multidimensionality of collections makes this archivist smile. Your placeography wiki is fantastic (even the name) and it makes me wonder about all the possibilities out there...

Very interesting. You might want to know that the original plat map of the City of San Francisco is housed in the gallery of the Museum of the Oregon Territory in Oregon City where it was filed to register Yerba Buena as an American City....might be some useful data there.

fascinating to think about where maps live, and how all that relates to archives, power, relationships, history...thanks Lesley for bringing this to light in all that you do @MNHS. Thanks, David, for making more connections here between SF, Oregon etc.

aren't maps one of the more visible part of the Vatican Collections?

We have a lot of maps @magnes. and I know several individuals who collect maps. Who are some of the leaders in digitization of map collections?

I am a map geek now too. Megan pointed me to your exciting adventures in maps. Good stuff.