Click here to viewDavid Porter at #MCN2009 Talking about #wma09David Porter's presentation to the Museum Computer Network annual meeting in Portland this past Friday. THANK YOU, MCN for inviting WMA to be a part!  The following questions were asked: 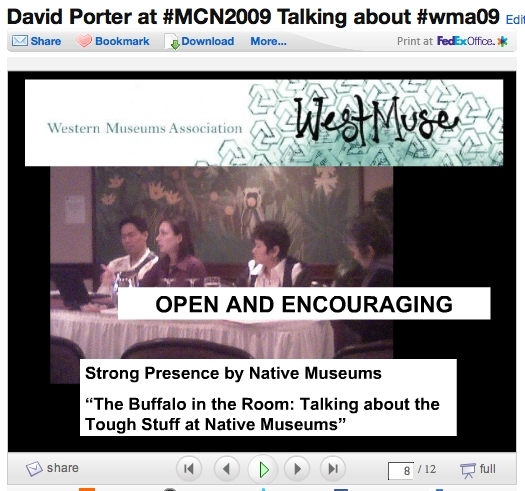 And the other participants on the panel included:

Thanks for the invite, Susan Chun and MCN!  This is such a great way for us all to keep up evaluative process as we maintain a rolling assessment of the value of "carbon-based conferences."

One thing I actually considered doing this year before I was able to see my way clear to attending physically, was to attend "virtually" - I know that it would be a pretty tough thing for attendees to do, but a speaker attending by Skype or as an Avatar in Second Life could be very doable.
I thought the University idea was an excellent one - before reading the down side. Staying in empty dorm rooms with sleeping bags actually sounds appealing a bit (except Badger Merritt would have to promise not to lose a kidney or some other important organ) - I will be wracking my brain to think of other innovative solutions.
Hmm...empty military bases? :)
All that aside, WMA is such an incredible and brilliant group of people with a great love for each other, a love for learning and exploring and I am certain that Portland will be a successful venture. :)

tremendous overview, David. Much to consider here. does seem to support the blog concept for documentation and dialogue in support of Association activity. MCN does a great job, too, in partnership with AAM M&T group they keep up musematics: http://musematic.net/

it's a model for us all.

Thanks so much David and James for working on our presentation for this timely conference. I appreciate all of the information and experience our colleagues shared in this session. Much to consider and certainly all of us are rethinking our conference model.

Wow, that is an *impressive* list of conferences and speakers that David and the WMA were invited to share a stage with. Thank you, MCN, for the invite and thank you, David, for representin' and for your additional points made in the comments--there is a lot to consider there.

But one concept that you presented, that of limiting attendance, while it could have fiscal benefits, at least to my way of thinking flies in the face of what WMA stands for and one of the greatest things that it has to offer through its big annual meetings: the opportunity for people to make connections. Reading Rachel Faust's post on her experience at WMA this year, that to me, is what WMA is about--bringing together professionals from all levels and disciplines for a giant conversation--or many smaller conversations--and having each one of them walk away the richer for it. Along the same line of reasoning, I think ( like you, David) I lean towards more access to content. My two cents.

Some added commentary.
1---The MCN Conference is being held at the Doubletree in Portland where we were scheduled for next year. Their conference drew 300 people. And I don't think that it was widely publicized in the museum community in the Portland area. I did see one colleague from Portland and I'm sure there were others. The conference does have a specialized focus so that may not be comparable. But attendance was not big.

2-- One of the organizers who was monitoring the backchannel discussion at the session, told me that they had struggled with the same issue we were confronting: the big hotel with a high room guarantee conference creates immense risk. They had decided to look at using a university setting as an alternative. This was on the East Coast. And indeed, they did not have guarantees to meet in the same way, but they discovered that the university service provider contracts approached charges from a 'per head' basis. So instead of higher attendance creating a profit margin for the conference, higher attendance ended up increasing costs incrementally----and on every service from coffeebreaks to room uses. That made them step back and reconsider.

3--Three of the presenters talked about conferences and activities which were built with a limited number of slots and a 'by invitation or by approval' registration process. That meant that many people were excluded who might have gone otherwise, but it controlled the numbers and costs. In two cases, the fees for the conferences were underwritten---IMLS and SI2.0 I believe. And in two cases the price was much higher to cover costs. It crossed my mind that maybe our discussion about having more small gatherings and online engagement could include a limited attendance annual conference which would require some of the participants to be the 'ignitors' of the smaller regional gatherings.

4- Much of the discussion was about 'backchannels' and broader distribution of content, both during and after conferences. Many of the conferences described had very active media for the dissemination of content during the conferences---ie webcasting and similar tools. But several people pointed out that there was a structural reason not to provide such things in that many institutions would not send their staff or cover expenses if the content was provided some other way. By contrast, a participant from the field of education, not museum based, said he was astonished at how little documentation and archiving of content there was. He said that in his field, the creation of content and distribution to the broader professional audience was considered essential to keep from continually repeating the same information and to create a broader dialogue and awareness in the professional community. (I think this issue truly deserves our deeper consideration; I think I fall on the side of having much broader and more permanent access to content.)