This past Wednesday, the Center for the Future of Museums hosted a lecture/webcast entitled, "Towards a New Mainstream," sponsored in part by Learning Times and, thanks to an anonymous donor, registration was free to all! For those who have not yet participated in a webcast, here's how this one worked: 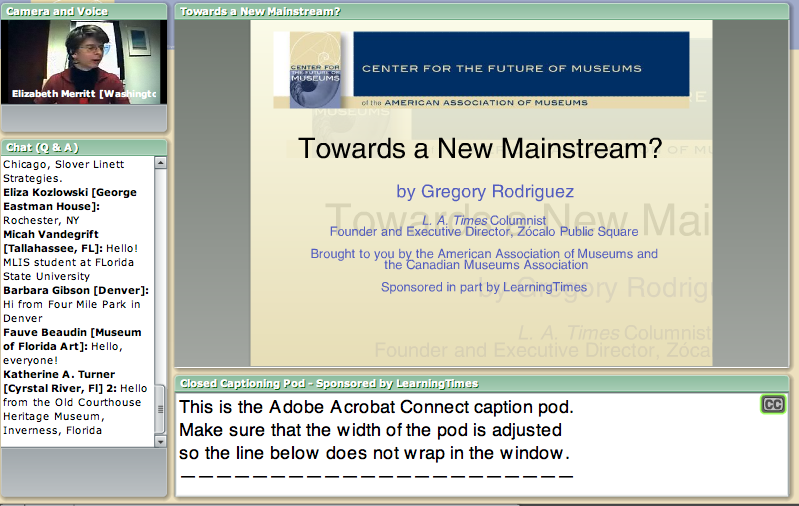 Up in the top left corner of my screen was a box where first CFM director Elizabeth Merritt appeared in a headset and introduced us to the topic and how it was all going to work. Later on that same box would show the number of all of the webcast participants and list them by sign-in name. Later still, this box would show the panelists who spoke via conference call after the initial lecture.

Below the top left corner box was a long narrow box that ran the rest of the length of my screen. This was sidebar chat area where all of the logged in participants could chat--about whatever, or in response to the topic questions that were posed during the lecture.

In the middle of the screen was where the main video of a lecture by Gregory Rodriguez played and James Chung presented his population data slides. Interactive polls were also posted there for participants to respond to. Below the video screen was a closed caption box so that people could read what was being said instead of or in addition to listening.

Along with the lecture and the webcast was a pdf discussion guide (available on the CFM website).

The agenda was as follows:

Elizabeth invited participants to engage at their own level of comfort--from just watching the video and listening to the remarks of the panelists, to chatting in the sidebar, answering the polls and discussing ideas in the follow-up chatrooms. At the height of the event in the middle of the lecture, I noted that there were 233 participants logged in. That number did drop by the time we reached the follow-up chatrooms to about 153, but that was still enough to have some strong discussions.

Just briefly I will touch upon some of the key ideas that struck me as I participated.

A picture is worth a thousand words and James Chung showed this snapshot of museum visitorship versus the overall US population in terms of demographics. 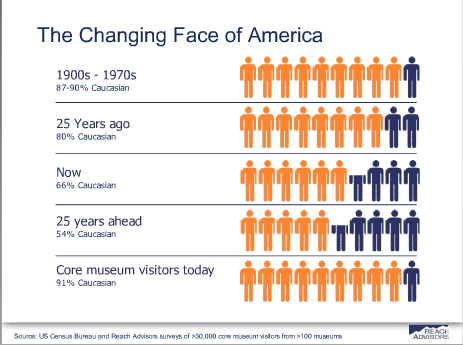 He went on to "unpack" (a current favorite term) that data to explain that one of the fastest growing populations in the US is the Latino population. But what does that mean? He was quick to point out that there are huge differences both in terms of English fluency and educational attainment just between the 1st and 2nd generations of Latino immigrants. This is an important fact that Gregory Rodriguez later touched upon in his lecture, as he explained that integration is not about offering multi-lingual marketing or labels; integration means second generation immigrants all speak English--Spanish is not overtaking English. In fact, it is a "crutch" and somewhat patronizing to rely on multi-lingual marketing to try to "reach" "diverse" audiences.

So at the heart of the discussion were notions about ethnicity and how we currently understand it and how we can better understand it in order to better serve our communities. Rodriguez explained that past attempts by museums to be "inclusive" were good first steps, but they were just short of tokenism and were designed to keep people in their separate ethnically defined boxes.

But, he explained that ethnicity "means nothing" We are all individuals, and we are Americans and *that* is our frame of reference. He stated that museums were missing the boat by assuming that being Latino only meant being a 1st generation immigrant who didn't speak English and therefore advertising in Spanish in the barrio. What about the rapidly growing English literate, educated Latino middle-class? They are currently being forgotten and ignored by museums. We have to allow for change and adaptability, he said, "it's not a revolution--it's an evolution"

Lisa Lee and Cecilia Garibay agreed with this idea of change and adaptability. Lee commented that identities were "fluid" and Garibay described identities as "multidimensional pieces."

Meanwhile, over in the sidebar chat area there was a big discussion about multi-lingual labels, a step that panelist Tammie Kahn feels is crucial for making 1st generation immigrant parents feel comfortable in a museum setting. Sure, their kids will grow up to be English language speakers, but unless those children grow up visiting museums, it is less likely that they will visit them as adults.

Also in the sidebar it was mentioned that in Toronto (and soon to be all of Canada!) all new Canadians (immigrants) are offered a one-year free pass to all museums as a way to introduce them to the museums and make them feel welcome. It is difficult to tell how many of these new Canadians remain active museum-goers after that first initial year, but it is a very interesting concept nonetheless.

One sidebar chatter mused, "It would be interesting to compare ethnic specific museum visitor trends with mainstream museum visitor trends..." Another chatter replied that her thesis had focused on museum staff diversity but had also touched upon visitorship for different categories of museums. A third chatter posited that she felt that "museums that are family focused have better success in attracting diverse audiences."

At the end of the lecture, in the chatrooms, I posed a question to Rodriguez:
"...we speak about America as being a ''melting pot'' when really it is a ''patchwork quilt'' that is largely stitched together by caucasian males--much as Gregory you mentioned that it is always the caucasian male who the moderator of the ''diverse'' panel. The society into which immigrants are ''assimilated'' and integrated is still largely the product of white men. At what point will this shift, do you think, and isn't integration problematic because this has not adequately changed yet?"

His response: "not sure we're a melting pot or quilt. hackneyed terms that never actually described the country. the truth is there was and never will be ONE Way to integrate into the u.s. ask the Amish"

But the best part about "Towards a New Mainstream"? The event may be over, you can no longer participate in the sidebar chatting, the polls or the chatrooms, but the *entire* event was recorded, which means that you can watch it all unfold--ever population data slide, every sidebar chat comment, the entire lecture video, everything! So if you haven't already--go do it now!

One point that is usually missed is that there is incredible diversity between people whose only common denominator might be the Spanish language when nationality, ethnicity and race are the real characteristics that people identify with most strongly, not to mention economic/social class and religious differences. Many people in my circle of relatives, friends, and colleagues would be more likely to identify themselves as Hispano, Chicano, Mexicano, or Puertoriqueno, with Latino as a convenient catchphrase in certain circumstances.

In New Mexico, for example, there are people who have lived in that landscape for 10, 15, or even 20 generations, long before the US was a country. Some are still more interested in how the Treaty of Guadalupe Hidalgo works out than if they are being marketed to in a way that appeals to them, while other families have long histories of education and don't even speak Spanish - they are totally "mainstreamed" by any definition.

People sew their own quilts and relate to their own neighbors, co-workers, and others as they wish. We have some really bad stereotypes out there about everything from the barrio to the myth of what white males actually control or dictate these days. I would recommend that everyone view the upcoming season of Skip Gates' PBS series on American Faces to see the true, very mixed, backgrounds of Americans.

Our US census and the politically correct university departments of (fill in the blanks) Studies also conflate language, ethnicity and race in ways that don't help people come together, but rather perpetuate the most corrosive of identity politics.

The great news is that our field can sponsor and promote these important conversations. Thanks for passing on your perspective on the CFM event to WMA members!

Excellent post, Allyson. Thanks! I'm so grateful to you for summarizing what I can only imagine was an incredibly frustrating experience - I mean, a 4-person panel of experts and 3 live-chats going on all at once? YOWZA!
I'm really glad CFM is willing to sponsor this kind of delving - thanks to Elizabeth and the CFM for sharing this so it is accessible to all.
A few years years ago, I got an insider's look at the marketing decisions made by a large health insurance company as they directed their attention to capturing the attention of various immigrant communities. They made many of the same token gestures - they translated their marketing materials into several different foreign languages and added a culturally-significant reference or two to signify that they were sensitive and multicultural, hoping this would create a feeling of inclusion. It was weak, but it was a start...what we need to recognize is it can't be the end.

Art: Yes, absolutely one of Rodriguez' points is that we are all individual--that ethnicities and cultures are not monolithic, and yes, Lydia, definitely Rodriguez mentioned in another panel discussion on KQED that these are beginnings, but cannot be ends. However, perhaps I misrepresented the format of the webcast; the panel discussion was followed by the three chatrooms--they were not simultaneous. There was a sidebar for optional chatting during the lecture, but of the 233 or so people logged in, maybe 30-50 were actually chatting there. What was wonderful about the webcast was the versatility and the ability to participate at whatever level was comfortable for the participant. Also, for those who really didn't want to engage online at all, there is a discussion guide to help prompt offline face-to-face discussions and follow-up activities.

Allyson, this is just FANTASTIC!!! thanks!!! james

And I hope, James, that if you did not participate on Weds. that you will go check out the recording!!

Thank you for the wonderful summary, Allyson! I also encourage folks to continue this ongoing discussion by showing the lecture video and using the discussion stimulate groups of staff, volunteers, board and community members to examine the demographic future of your museum. And you can dive into the ongoing conversation at the CFM blog (http://futureofmuseums.blogspot.com). Posts related to the lecture are tagged CFM Lecture 2010

Allyson,
That was a great summary that helped tie together the key themes across presenters. I look forward to following more of your summaries and observations on this blog.

If anyone wants to dig deeper into the demographics and implications, feel free to get in touch for a copy of the slides ( reach @ reachadvisors.com ) or any questions that arise, as we're always happy to swap notes on this kind of stuff!

Hi Alison,
Thanks for this summary. It was a great event...thanks to Elizabeth for organizing it all. What I found interesting was that many people from different places (e.g. Canadians, Australians, Americans, Europeans) chatted about their efforts to reach diverse audiences through language and translation, while Rodriguez was simultaneously speaking about the limited reach of this approach.

A related thought about the term "melting pot" which implies that all cultures blend. I wonder why "salad bowl" or "mosaic" (suggesting that cultural groups do have unique identities...even when part of a larger group) is not often used in the US.