From disease and death to land loss and forced subjugation, native museums often have the daunting task of exploring difficult issues and events. Too often, as museum planners and exhibit designers, we talk around these subjects without fully confronting them. Three museum professionals from the National Museum of the American Indian in Washington, D.C. and Bishop Museum and 'Iolani Palace in Honolulu, Hawai'i will share their efforts to shed light on these dark chapters. What problems did they encounter? How did they work with community members? And how did museum visitors respond?

Karen Kosasa, Director, Museum Studies Graduate Certificate Program, Department of American Studies, University of Hawai'i at Manoa handled introductions and then presentations were made by:

Talking about the Tough Stuff at Native Museums #wma09

We owe Noelle our thanks for organizing the panel and soliciting our participation on it.  As the moderator, I had the privilege of speaking with Kippen, Alexandra, and Noelle before they had to pare down their presentations from many topics to a few.

What I appreciated most was their willingness to talk about highly sensitive issues with candor and care.  Candor because talking about these issues is absolutely critical to our efforts to transform museums, and care because what they discuss is part of an ongoing process they cannot afford to jeopardize.  In her panel description Noelle refers to these issues as “the buffalo in the room”—the things that museum planners and exhibit designers talk around and rarely confront.

This panel marks a stage in a journey toward what some are calling the “inclusive” museum.  The inclusive museum is notable for its efforts to include diversity, and not just the “feel good” strain, but the type of diversity that museums generally avoid for fear of alienating their audiences or infuriating their staff or board members.  Here, diversity often includes the views of a museum’s harshest Native critics as well as the hopes of those who envision the museum as a place for conversations about complexity and controversy.

The museums mentioned in these presentations—‘Iolani Palace in Honolulu; the Barona Cultural Center and Museum in

Bishop Museum was founded in 1889 by Charles Reed Bishop in honor of his late wife, Princess Bernice Pauahi Bishop, the last descendant of the royal Kamehameha family.

Lakeside, California; the National Museum of the American Indian in Washington, D.C.; and the Bishop Museum in Honolulu—are presented as Native museums, but they speak to larger issues that concern non-Native institutions and cultural centers.  As a non-Native educator, I thank the panelists for allowing us to learn along with their institutions as they tackle the “tough stuff” and transform themselves and their relationship with Native communities and visitors.

I would like to summarize a few things about each of the presentations.  (Perhaps in the future we can put together an anthology where we can discuss these issues in more depth.)  It is interesting to note that some of the most compelling insights shared by the panelists concerned “internal” debates that took place among museum staff or between staff and board members.  At times these internal criticisms weighed more heavily on staff than external criticisms.  In certain cases it may have been due to the respect a staff person had for a colleague’s expertise, in others it may have been the result of being outranked, and in still others, of having no means to appeal a decision.

In Kippen’s presentation he described the significance of ‘Iolani Palace as an “emotional symbol” for many Hawaiians.  Although it was not the official seat of government for the Kingdom of Hawai‘i, it was the site of the last monarch’s imprisonment, and eventually housed the offices of the territorial and Hawai‘i state governments for many years.  In recent years, it has been “taken over” and public access temporarily blocked by different Hawaiian sovereignty or independence organizations seeking to restore the Hawaiian kingdom by bringing attention to a range of issues including the overthrow of the Hawaiian government in 1893 (by white settlers and the U.S. military), the illegal annexation by the United States in 1898, and the illegal process by which statehood was achieved in 1959.

As the director of ‘Iolani Palace, Kippen has had to work with many different constituencies to protect the palace and ensure that it remains open to all visitors.  He described the continuous challenges he confronts from questions about the historic interpretation of the period rooms, to whether educational programs can be relevant without making references to “politics,” to discussions about acceptable funders/donors, and in 2009, to mediating conflicting views over how the palace grounds should be used to commemorate (not celebrate) the 50th anniversary of Hawai‘i statehood.

It is obvious that Kippen and his staff must carefully negotiate issues of interpretation, collections care, and heritage management that in most institutions are routine matters, but at ‘Iolani Palace, quickly become the subject of media attention for local, national, and international audiences.

Alexandra began by describing the many issues the staff at the Barona Cultural Center & Museum considered in developing a major history exhibit to celebrate the 75th anniversary of the Barona Indian Reservation.  (To view Alexandra's slideshow click here.)  A significant number of elders wanted to avoid representing the past in a negative way that would depict Indians as victims and make non-Indian visitors feel uncomfortable or guilty.  They emphasized the need to portray positive factors.  At the National Museum of the American Indian, she explained, everything is “potentially controversial” because it is committed to dismantling myths about Native peoples and replacing them with stories or perspectives that are generally unfamiliar and hence disturbing.  In order to assist the museum in this difficult task, it has conducted surveys to find out what visitors know as well as how to encourage them to engage with new information and experiences. 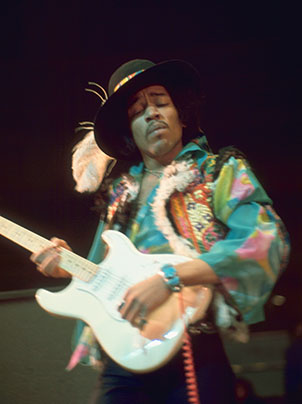 The rock-and-roll innovator Jimi Hendrix often spoke proudly of his Cherokee grandmother. He was one of many African Americans who cite family traditions in claiming Native ancestry.

To illustrate some of the challenges facing NMAI, Alexandra described two upcoming exhibitions, “Indivisible” on African-Native Americans (opening in November 2009), and “Treaties” (opening in 2012/2013).  Let me mention a few things she presented about the latter.  Although many Native people believe that treaties are “universally bad” and should be discarded, the exhibition developers hope to change these beliefs.  Past treaties acknowledged Native sovereignty and can be used to argue for tribal rights in the present.  With the help of explanatory texts, displaying a Kiowa pipe can help visitors to understand its function and meaning within treaty negotiations—the telling of truth and the sealing of agreements.  A pipe thus stands as a witness to the existence of treaties and the fact that two or more parties consented to them in good faith.  What happens, then, when one party violated an agreement after it was sealed?  For me, crucial and disturbing topics of conversation open up.  For instance, what are the implications when the violator was the United States government and its representatives?  What is our ethical obligation to right historical wrongs?

Noelle started her presentation by locating the Bishop Museum within two histories—first, the historic decline of the Hawaiian population since Western contact and the political dispossession of the Hawaiian people in the nineteenth and twentieth centuries, and second, the history of the museum itself.  While Bishop Museum began auspiciously with collections of treasured objects from three Hawaiian royal women, it eventually devolved into portraying Hawaiians from a non-Native perspective and relegating Hawaiian culture to the past.  Hence, she emphasized the importance of the museum’s newly re-opened Hawaiian Hall in August 2009, and its efforts to present an Hawaiian worldview.

For many in the Native community, the renovated exhibits are more than beautifully redesigned displays, they are restoring “health, trust, faith, foundation, and a nation.”  According to Noelle, most of the “buffalos” in the museum were/are congregating on the third floor of Hawaiian Hall.  Here, controversial political issues are directly addressed by Bishop Museum for the first time (e.g., the events leading up to the 1893 overthrow, the 1898 annexation process and its protesters, opposition to statehood in 1959, and the rise of the contemporary Hawaiian “renaissance” and independence movements).

Like Alexandra, Noelle described the concerns of staff and board members that the exhibition team avoid developing negative portrayals of historic events.  Because they could not completely avoid this problem, Noelle ended her presentation by noting the presence of an important exhibit on the third floor that includes a large painted mural and a video.  Both works refer to a prophecy chant that foretells the rise of the Hawaiian people (“that which was below would rise up…”) after experiencing profound changes.  In these two pieces, the museum hopes its uplifting message about the resiliency of the Hawaiian people will resonate with all visitors who have experienced difficulties and grown stronger because of them.

I believe these three presentations have opened an important space for future discussions about topics we have avoided in both Native and non-Native museums.  I hope all of us will take the opportunity to join Kippen, Alexandra and Noelle and carry the conversation further.

A wonderful review and a great panel. Barona Museum was proud to be represented. Thanks so much Karen, Noelle, Kippen and especially our former curator, Alexandra (of NMAI) for representing so well these important issues for Native American museums!

Thanks so much for looking at the posting and for your response to our panel. It was so nice to talk with you at WMA too.

Thanks for this post Karen. It is always interesting to see what's happening in this area in other countries.

As you may be aware, the situation in Australia is quite different as we don't have legislation to deal with and have gone down the path of relationship building and policy development / implementation, in a simliar vein to Canada.

If you want to find out more about the Australian context you can find links to papers and book chapters on the right hand side of this page: http://www.australianmuseum.net.au/Indigenous-Issues-and-Museum-Evaluation

I want to start off with saying this was an excellent review, I didn’t new that much about this. I landed by mistake on this page but I’m glad I did. Cheers Pieter