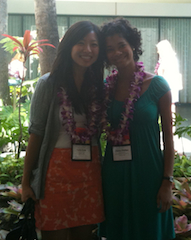 Whereas the summer was already ending in Seattle, with seasonal showers and sixty-degree temperatures, the warmth of the sun and welcoming aloha-spirit undoubtedly describes my time in Honolulu for the 2011 WMA Annual Meeting. However, “working together to move forward,” truly characterizes my experience at the meeting this September.

Attending on behalf of the Northwest Nikkei Museum, I was able to connect with other institutions to find solutions to common problems of limited space and financial resources.  In our particular case, the NW Nikkei Museum is one of many programs offered at the nascent Japanese Community and Cultural Center of Washington, and has the meager designated museum funds to match that positioning. Located in three historic buildings that have served the Seattle Japanese community since 1911 as a gathering place, a Japanese language school, and even temporary housing for displaced families returning from their forced relocation during World War II, the NW Nikkei Museum inherits a rich history but with challenges in preserving it in a dated environment.  To preserve and present Japanese American objects and stories, the museum operates under a volunteer-run and community-based advisory committee, which often competes with the other demands of peoples’ busy lives.

In light of these challenges, I anticipated receiving practical advice on relevant topics ranging from collections management in historic building environments to community-developed programs. I did gain such insight: from the Mission Houses Museum tour, I learned how its volunteers were a vital force in sustaining museum operations with lean budgets. And from the Museums as Center of Community session I found hope in the successes of other community-based museums in connecting with their local audiences.

But I also gained much more than useful tips to take back to Seattle. More profoundly, from the open sharing among people from other Nikkei-related institutions, I discovered myself as part of a greater supportive network that champions Japanese American heritage and history. Despite the geographically specific slants to stories of Japanese American immigration, incarceration, and integration back into American society, they are shared stories nonetheless. Likewise, with collective concerns for a diminishing Nisei generation who endured the prejudice of World War II, and for encouraging multigenerational stewardship of that legacy, it behooves us to join minds and resources before it may be too late.

Through formal presentations, friendly information-sharing, and a gracious site-visit, I not only learned a great deal from colleagues at the Japanese Cultural Center of Hawaii and elsewhere, but also how we can all work together to move forward. Whether that’s applying the success of digitization efforts at Kapiolani Community College to the archival needs at the NW Nikkei Museum, or contributing to the Discover Nikkei website, hosted by the Japanese American National Museum, it’s clear that collaboration on some level is key.

While the advantages of a group effort among Nikkei cultural organizations became evident to me at the Annual Meeting, upon further reflection I also understand how crucial that sentiment must also apply to a broader set of museums. Whether united by ethnic heritage, contribution to an American identity, or heritage preservation in general, museums do not exist in silos and must function as they are, in a broader cultural landscape.

Since the meeting, I’ve returned to Seattle with collegial connections that I don’t know if I would have found otherwise, and with a deeper understanding of what community means in the museum field. The NW Nikkei Museum has since transferred the cooperative spirit in its city-wide coordinated programming in honor of the Day of Remembrance on February 19, 2012, the 70th anniversary of the issuance of Executive Order 9066 that forced Japanese American relocation to internment camps.  Personally, I’ve become further motivated in my work with the NW Nikkei Museum, and am certain that such community-based initiatives not just be ancillary but central to my museum career.

Both the NW Nikkei Museum and I have benefited from this year’s Annual Meeting.  I’m very grateful for the Wanda Chin Scholarship which made my attendance possible.

Tasia Endo is a graduate of the Museology M.A. program at the University of Washington. She is the chair of the Northwest Nikkei Museum at the Japanese Cultural and Community Center of Washington, and works as the Education + Public Programs Coordinator at the Seattle Art Museum.