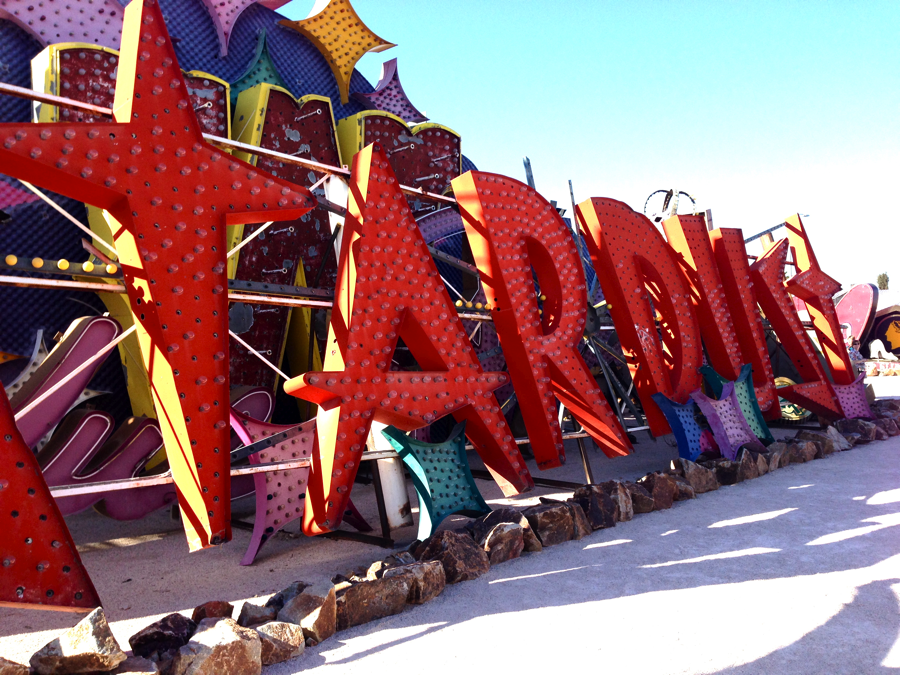 By: Jim Tharp and Jim Lindheim

Outside the Neon Museum in Las Vegas perches the gigantic Silver Slipper that once adorned the Silver Slipper Casino.  The story goes that Howard Hughes, having purchased the Desert Inn so that the owners wouldn’t throw him out, decided to also purchase the Silver Slipper Casino across the street so that he could remove the spinning silver slipper from his bedroom window view.   Now the Museum has lovingly restored it to working glory in the middle of Las Vegas Boulevard.  Howard is probably shaking in his Kleenex boxes at the idea that the slipper eluded his power. 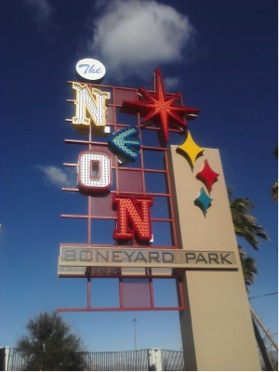 We’re seeing this historic relic thanks to the tour package we purchased at the Wanda Chin Fund auction at the WMA Annual Meeting in Palm Springs.   The tour includes, as you would expect, hotels and some very fine restaurants.  But it is also making us do a very un-Las Vegas thing in America’s gaudy playground – go to museums!

As the Museum’s Cerese Hill, our personal tour guide, explained, “Las Vegas never would have happened if it hadn’t been for the mob.” To see the collection of the Neon Museum, you need to take a guided tour of the vast display of discarded signage that is piled up – with love – in an outdoor space.  This vast collection of artifacts reveals an art form unique to both a moment in time and to Las Vegas.  And as the tour unfolds, you also learn the history of the rise and fall of motels, hotels, casinos and other businesses in the turbulent economic maelstrom of Las Vegas’ evolution.

The other side of that economic history is told in the Mob Museum, a story of organized crime and corruption. The Mob Museum is housed, ironically, in the old Federal building in downtown Vegas, a building where several of the Vegas mobsters were ultimately put on trial.  The exhibit weaves several stories together – the national story of the emergence of organized crime in the 20th century, how various criminal factions built Las Vegas and controlled it up until the 1970’s and 80’s, and how law enforcement heroes finally created the tools to  clean up the town.

Through photos, films, interactive displays, and artifacts the Mob Museum introduces you to the world of criminality  in a non-sensationalist, almost non-judgmental way.  But the tentacles went deep and far.  We learn that Meyer Lansky, one of the most notorious gangsters, received a Presidential Medal of Honor from Harry Truman for his heroic work keeping the docks open during World War II.  We see pictures of Hollywood’s greatest – even Ronald Reagan – hobnobbing with the mob.

And only a short distance away from this display of corrupted human ingenuity is the wonderfully innovative Springs Preserve collection of outdoor and indoor exhibits that bring science to life.   Standing on the grounds of the original springs that made Las Vegas possible, the Preserve explains hydrology, geology, desert botany and biology through everything from interactive displays to walks through a beautifully designed and labeled native garden.

Water is, inevitably, an underlying theme of the collection, with many exhibits teaching the criticality of water conservation and sustainable practices.   There is also a fabulous exhibit on flash flooding where, after being duly educated and warned, a roaring cascade of water comes down at you and, happily, runs under your feet.

Dawn Barraclough of the Museum told us that some 30,000 school children visit the 180 acre facility each year, learning about the fragility of their natural world, which is otherwise so obscured in the bustle of Las Vegas.

After our five day visit, I can confidently promise WMA members that our 2014 Meeting in Las Vegas is going to surprise you with a variety of experiences that go way beyond our typical assumptions of what the city has to offer.   The Museums we visited in Las Vegas – and some of the others the city has to offer, like the Atomic Testing Museum – are a testament to a city whose history and environment is unlike any other in the world.