The Bainbridge Island Historical Museum is located on Bainbridge Island, Washington in Puget Sound, and this circumstance provides both unique opportunities and challenges. Our membership is drawn primarily from the Island’s current population of approximately 23,000 residents. The population serves as a bedroom community for commuters traveling into the City of Seattle by ferry, although up until 1950, there was no connection to the mainland except by ferry.

Native Americans lived on the Island in pre-contact days during their annual travels around the Sound during times of the year when they fished and harvested shellfish. As a result the Island had Native American names for prominent features and there are numerous middens along the shores.

The Island’s population grew slowly during the logging and sawmill days from the first Caucasian settlers beginning in 1854. Because there were no roads or auto transportation on the Island, settlements were established in various places around the Island and transportation between them was difficult. As a result, the communities were served by the “Mosquito Fleet,” a series of steamer vessels plying the Puget Sound while providing deliveries of groceries, essentials, mail, and transportation to various other locations around the Sound. There were as many as thirty-one steamer docks built to serve these communities. For example, up until 1929 there were as many as eleven school districts on the Island, which was only eleven miles long and four miles wide.

The Museum’s main exhibit space is a 1000 square foot one-room schoolhouse, which contains our semi-permanent exhibits. We have an additional annex adjoined to the schoolhouse that contains our entryway, a small store, temporary exhibit space, research library, and the offices of our staff of four. 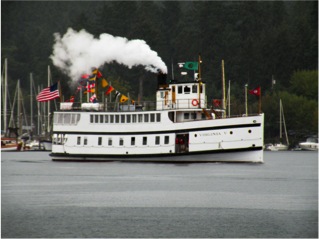 The Museum has used the past to further its mission of fostering knowledge of the unique history of the Island as well as fundraising. Each year, we sponsor a steamer tour for 150 passengers around the Island with historians and the Suquamish Tribe’s archeological expert who provides commentary during the trip. The last remaining steamer on Puget Sound, the Virginia V, which has been refurbished by the Virginia V Foundation, is hired to provide the experience. The steamer is one of only two steam powered wooden vessels remaining in the United States. It holds 150 passengers and travels from its port in Lake Union in Seattle to the Island where the passengers board. The Museum provides a sack lunch as well as other logistics for the trip. We charge for the trip and have made this a major fundraising event for the Museum.

Not only does the Museum receive the cost per person for the trip (less the cost of chartering the vessel), but it also receives sponsorships to help offset the costs incurred by the Museum. The Museum does make a profit on the cruise, which goes into the overall operating budget.

The fundraising event serves to further the partnership with the Suquamish Tribe and educate the participants with important aspects of the Island’s unique history. This along with a joint summer camp has helped open up communications and exchanges with the Tribe who have their own way of doing things and who are not easily approachable by the Island’s population. Moreover, it shows and demonstrates respect for the Tribe. Ultimately, this fundraising event encourages membership to the Museum as a two-tier pricing model is used, and members receive a discount on the trip.

The trip is advertised on the museum’s website, www.bainbridgehistory.org, on posters around the Island, and through direct emails to members.

We are sure that there are other museums that utilize their unique histories in ways to benefit their fundraising efforts. This works well for us.

Hank Helm has been with the Bainbridge Island Historical Museum since 2006 and Executive Director since 2008. He spent the previous forty years in private industry, mostly as a principal and president of an Equipment Distributor. He graduated from the University of Washington with a Bachelor of Science degree.