By Samantha Porter Two weeks after I started in my current role at the Burke Museum of Natural History and Culture, I joined the team that was tasked with developing one of the most ambitious exhibits the Museum has created, Imagine That: Surprising Stories and Amazing Objects in the Burke Museum. The mission of the exhibit is to give the visitor an insider’s view of what happens behind the scenes at the Burke, answer some of the common questions that people ask about museums, and reveal how collections show us new things about the world around us every day. Attempting to explain what a museum does in less than 4,000 square feet and with a finite number of objects is challenging to say the least. I liken it to preparing for a six month long backpacking trip across the Himalayas. To make sure we were prepared in the best way possible, the exhibit development team needed to be diverse. On board were the interpretive director, two curators, a label writer, an audio visual specialist, an education specialist, the digital communications manager, both the registrar and assistant registrar, our exhibit designer, exhibit fabricator, and me, the Community Outreach Coordinator. We then created an exhibit brief that spelled out where we were headed, the institutional goals, guiding principles, and exhibit experience framework. 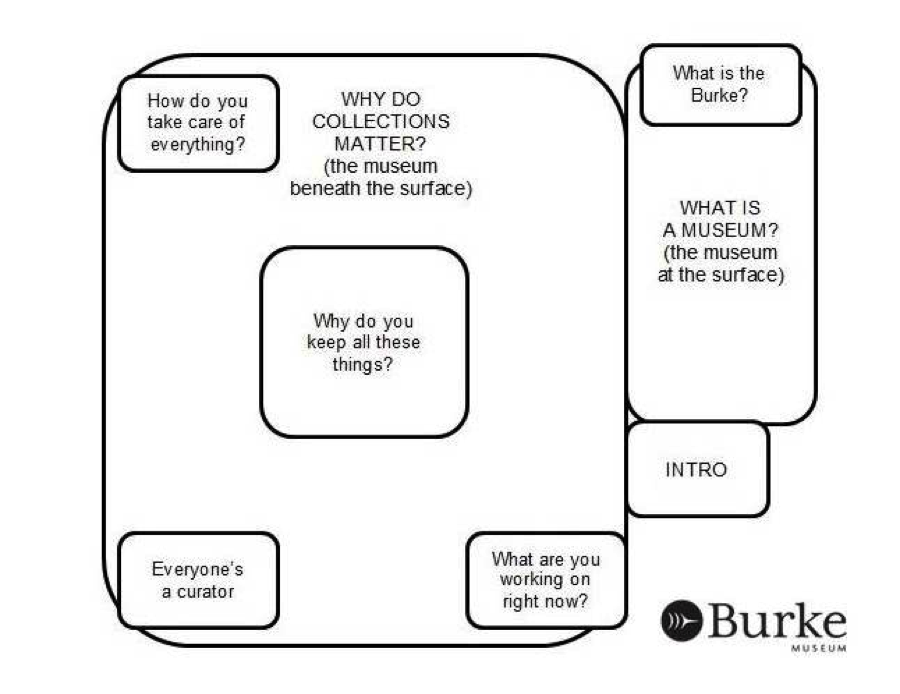 We discussed the overall concept and determined the sections that we wanted to feature. Then we set out to discover objects and specimens in all fourteen research divisions that fit each section of the exhibit. I scheduled meetings with all of the curators, collections managers, and key members of the exhibit development team to find out from the experts what they wanted in the exhibit. (If I could marry Doodle.com, I would.) In each meeting the wealth of knowledge that each department holds about their collections was apparent. The 15-17 questions we asked in our initial interviews ranged from, “What is the oldest accession in your collection?” and, “Tell us about a newly described or studied object in your collection,” to “Tell us about something in your collection that you are especially attached to, fond of, or have some kind of relationship with that transcends intellectual interest.” The responses were exciting and varied—especially to the last one. Some people responded with a quizzical look and said the specimens in their collection were purely scientific, and some were almost flattered that they got to talk about the object that was most impactful to them and their reason for being at the Burke. 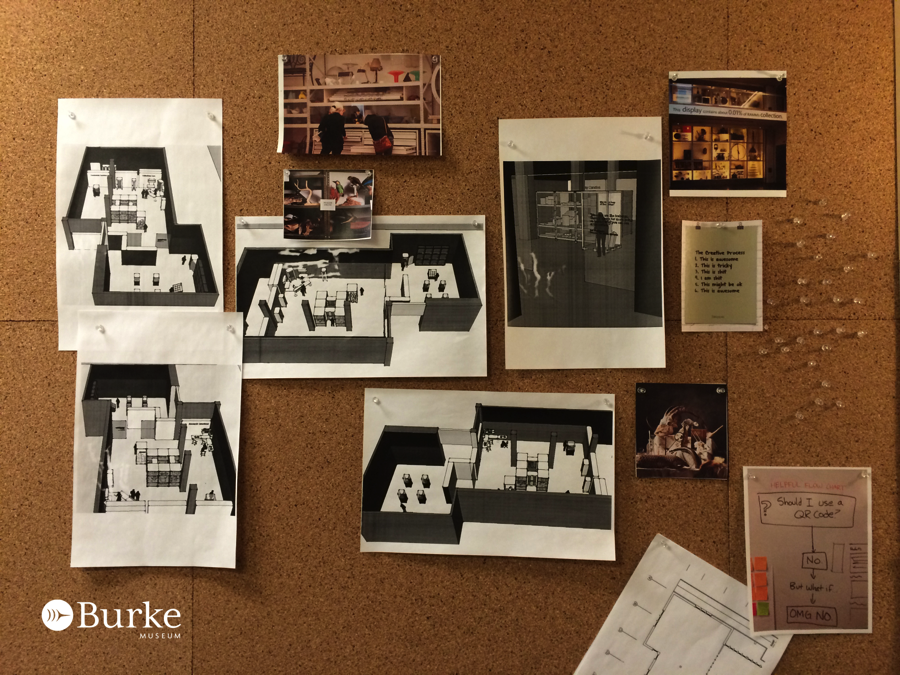 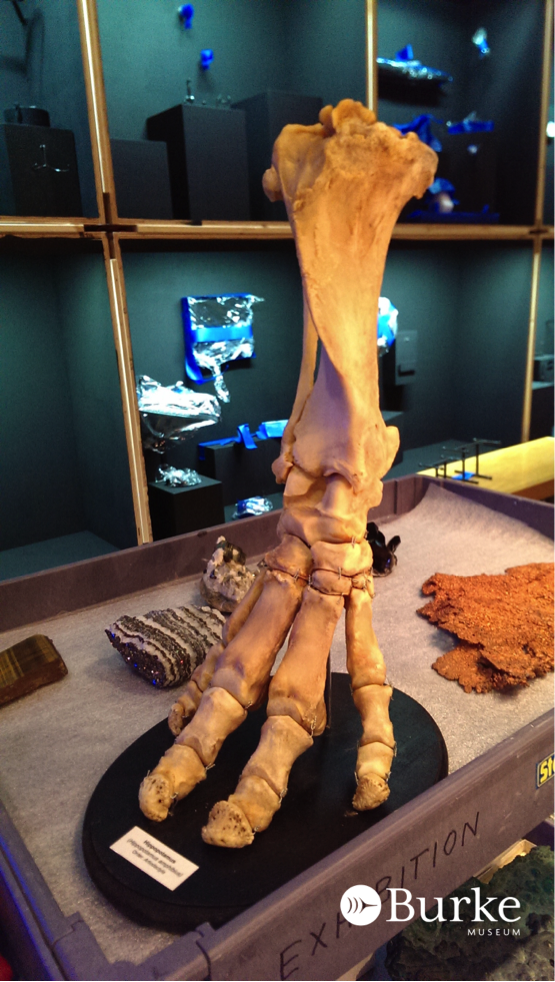 Hippopotamus foot from the mammal collection

The process of selecting the actual objects that fit these categories was sometimes easy and at other times incredibly complex. Selecting the largest, smallest, or oldest object in each collection was fairly simple. However, to pick a series of objects that demonstrates the similarities and differences across cultures proved to be more complicated (footwear and fishing equipment won out). A few weeks after the first interview with each department I experienced déjà vu and had to schedule another series of meetings with everyone. The team that met with curators and collections managers the second time brought the physical dimensions of each shelf and section of the actual exhibit space. These size parameters created a haiku-like space within which each department was able to express themselves. For example, the 3’x 3’ x 3’ “Ology Boxes” required smallish, visually impactful objects that will welcome the visitor and explain each research division of the museum. An exhibition always needs to balance what best fits the exhibit content, what is going to be most engaging to the visitor, as well as effectively explain the story we’re setting out to tell. It is an ever changing process to ensure the visitor’s needs are met as well as the accurate representation of the research divisions at the Burke. 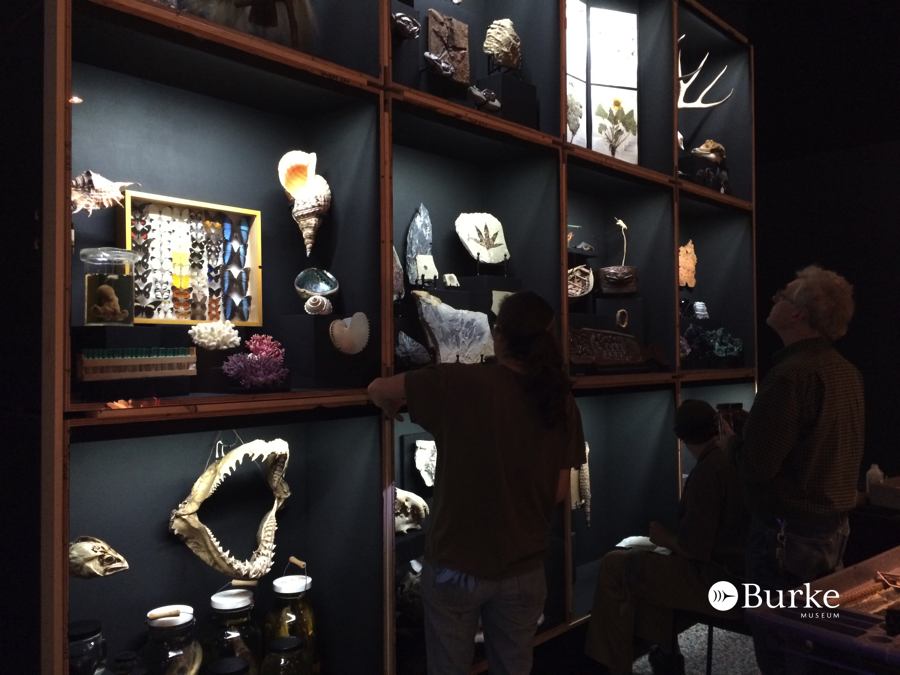 After weeks of meetings, conversations, emails, phone calls, and impromptu visits, the lists of objects were compiled. With over 500 pieces from across the Museum, the logistics of gathering and installing each object was an intricate dance of timing, placing, and careful attention to detail. Each department pulled, documented, and staged each piece, after which an exhibit staffer and the registrar came around to pick up each collection and restage it in either the exhibit department or on location in Imagine That. Once each section was filled in the exhibit, it was adjusted by the exhibit designer for aesthetics, optimal visitor experience, and maximum visibility. Once each section was complete, it was properly lit and the labels were applied before it was finalized, sealed and secured. 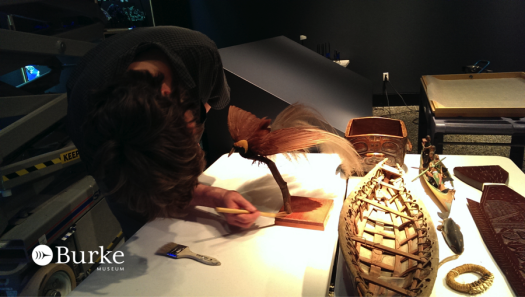 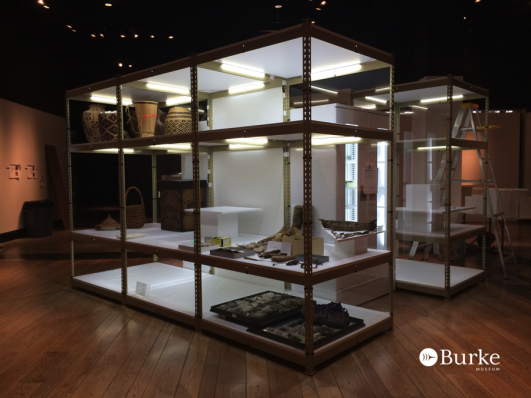 Two experimental sections that we’ve included in Imagine That are the community curated display and the interactive lab. University of Washington football athletes that are Pacific Islanders make up the first community group. This team of students selected a series of ethnology objects from the Pacific Islands. They shared the relevance of these pieces and why they represent to them the interconnected nature of where their families came from and still live today. The interactive lab is also going to be awesome. Every day the exhibit is open, there will be staff or volunteers actively caring for collections, dry-sorting, potentially wet sorting, and possibly even doing specimen prep on site. Visitors are encouraged to engage with the person doing the prep work and ask them questions. It’s the perfect chance for the Museum to really participate with the visitor and invite them to learn more about what goes on at the Burke. Now that we’re in the last few days before the exhibit opens, we’re finishing the install and finalizing the last remaining pieces in order for Imagine That to be engaging, relevant, dynamic and surprising. The exhibit opens on April 12, 2014 and is up through October 26, 2014. We hope to see you there!

When you visit Tweet at us and tag us on Instagram; if I’m around I’ll come up and show you my favorite pieces in the show!

Samantha Porter is the Community Outreach Coordinator for the Burke Museum of Natural History & Culture. From pangolins and marbled murrelets to clovis points and trilobites, Sam is always amazed by the depth of collections that are held at the Museum. When she’s not out in the community telling people about the fascinating things at the Burke she can be found sneaking around the molecular lab in a lab coat pretending she’s a scientist. All photo credits: Burke Museum