Cue the drum roll…. the winner of the 2014 WMA Charles Redd Award for Excellence in Exhibitions is The Oakland Museum of California!!

2014 was a terrific year for the Charles Redd Award! The exhibitions that were submitted were each incredibly exciting and compelling. From Alaska to Arizona, representing six different states, the geographical scope was very wide in presenting ideas from a great variety of locations. Once again the choice to select a winner for the Redd award was exceedingly difficult. Speaking for the Redd Award Committee, I would like to applaud the Oakland Museum of California for their winning exhibition, entitled Above and Below: Stories From Our Changing Bay. 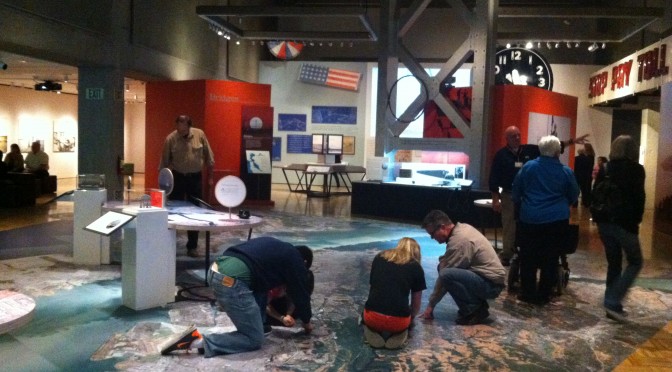 Occasionally an exhibition comes along that delivers on so many different aspects of what it means to be a great exhibition. As professionals in the field, we all recognize there are many choices that must be made when developing exhibits that will affect the overall outcome. Generally these are in response to overall program requirements or institutional duties; be it budgets, staffing, scheduling, etc. Having said that, the stars can sometimes align in such a way that a concept can grow and blossom in the best way imaginable.

Above and Below came about through a partnership with the California Department of Transportation, initially started in 2001. As part of the rebuilding project of the eastern span of the Bay Bridge Caltrans partnered with OMCA to create an exhibition that probed the history of the Bay, openly discussed the present state and asked for thoughts on what the future of the Bay might be. Although this particular example of public discourse and transparency was actually a legal mandate in California law, how it was carried out was nothing short of brilliant. What began over a decade prior finally opened in 2013, filling 13,000 square feet of gallery space. 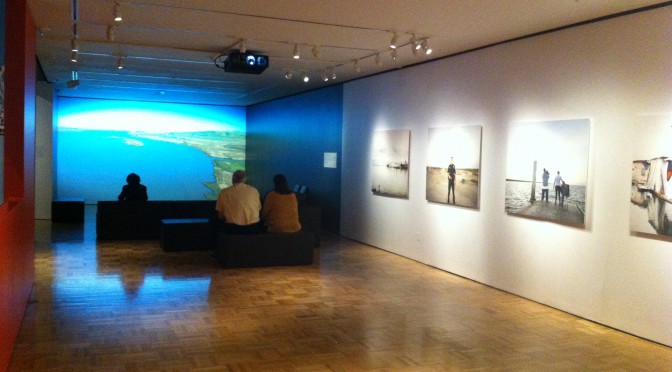 To create the most complete vision possible OMCA reached out to historians, scientists and artists to build a diverse set of viewpoints and perspectives. In their own words, “Above and Below, the exhibition and accompanying programming told a complicated story that captured the nuances, uncertainty, multiple viewpoints, and historical contingencies of the region’s history. The project did not advocate for one best future for the Bay, but opened the question: how might people live with the Bay in the future, and who gets to decide?” The exhibition was accompanied by a wealth of public programming and educational materials, many of which are still available on their website. Numerous partnerships and collaborations were established in pursuing the final exhibit, including the State Historic Preservation Office, the Regional Oral History Office and UC Berkeley, the Stanford Spatial History Lab, state and federal agencies, community members, and many private firms. Noah Stewart, from the Caltrans Office of Cultural Resource Studies, summed up the finished exhibit this way: “We have a hard time as an agency in reaching the public. This was one of the benefits of working with you guys (OMCA). I can’t say enough about that – how you work with the community, and they consider the museum ‘their place.’ That’s who we’re working for too. This is probably the most successful mitigation measure we’ve ever done, measured by the number of people reached, who really saw our ‘stuff,’ and got a view of how we do what we do. And personally, the exhibition allowed me to realize what the bridge meant to people. It really worked! This is probably a once in a lifetime experience. We don’t have the resources to do projects this big on a regular basis—but I would do it again in a heartbeat.”

Also of particular interest were two very different exhibits that applied for the 2014 Redd Award. Denali Legacy: 100 Years on the Mountain at the University of Alaska Museum of the North, as well as Route 66 at the Autry National Center of the American West. Denali took viewers on a riveting adventure detailing a 1913 expedition to climb to the summit of Denali, the highest peak in North America. The quartet of men who made the trip were far from the tourist adventurers of modern times and the exhibit displays journals kept by each of the men, detailing their own personal trials. For specific events, entries from the four diaries are displayed side by side to reveal the different perspectives each brought to the expedition. In a few instances descendants of the climbers were recorded reading from the journals, which were then presented in the exhibit, further enriching the experience.

At the Autry National Center of the American West Route 66: The Road and the Romance was visually stunning. Great attention to detail is evident in the graphic design, color selections and a unified experience with the objects presented. While the romantic affections for the history of Route 66 are well known, the Autry presented the hits as wells as a number of points that are frequently overlooked. For example, the exhibit presented the often-overlooked aspects of traveling Route 66 if you were African American. To address this two objects on display, a Negro Travelers’ Green Book and a “Whites Only Within City Limits After Dark” sign deliver a stark reminder of other currents that swirled at the time.

Perhaps one of the most challenging aspects of the decision-making process was understanding the overall greatest value to audiences. While scholarship, didactic panels, LED lighting and excellent visitor flow patterns are important (to us at least!), one must take a step back and try to understand what the real impact is to the community and those who visit the shows. To begin to evaluate this nebulous aspect, the Redd Award asks submitting institutions to describe any programs created in association or support of the exhibit. This frequently includes lectures, presentations, educational programs and other forms of community involvement meant to strengthen the exhibit. This was a tremendous year for examples of strong programming and community outreach. In this area special mentions go to the Barona Cultural Center and Museum (Sports: The Competitive Spirit at Barona), The Burke Museum of Natural History and Culture (Elwha: A River Reborn), History Colorado (More About Morey), and the Museum of History and Industry (Revealing Queer).

Finally, I want to thank each of this year’s panelists for sharing their time and expertise. If we added up everyone’s hourly rate for time spent on this I’m sure I couldn’t afford you. Much gratitude!

For more information and images of the Above and Below exhibition visit the OMCA website or read this blog post. There is also a wealth of education materials created as a companion to the exhibit.

Adam Mikos is a Board Member of the Western Museums Association and is Chair of the Charles Redd Award for Excellence in Exhibitions Committee. His 15 years of museum experience range from the Art Institute of Chicago and the Museum of Comtemporary Art (Los Angeles), to searching behind refrigerators for missing collections objects at smaller museums. His professional focus rests on exhibitions, collections, and public programs.

You can reach him here: adam(at)looseknitcollective(dot)com