When my Getty colleagues and I embarked on the development of an architecture exhibition about the rapid evolution of one of the world’s most dynamic and influential cities, we had to embrace one harsh reality. People love to hate Los Angeles. Despite the fact that this region has inspired the creation of some of the most iconic structures of the twentieth century, including Griffith Observatory, the Capitol Records Tower, John Lautner’s Chemosphere, the space age Theme Building at Los Angeles International Airport, and Case Study House 22 by Pierre Koenig, many are more inclined to associate this vast metropolis with haphazardly assembled banality than engineered excellence. Reframing the public’s perception of L.A.’s built environment was an exciting and daunting opportunity. Thanks to the extraordinary contributions of scores of talented individuals, Overdrive: L.A. Constructs the Future, 1940–1990 was able to reveal how Southern California’s latent landscape was transformed into a vibrant laboratory for architectural innovation. 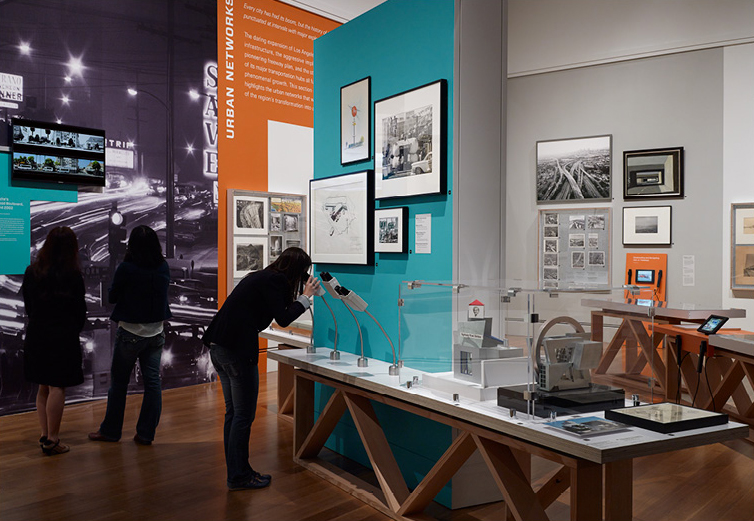 There are multiple ways to engage with the exhibit including videos, iPads with sound wands, and 3-D viewers.

Receiving the Western Museum Association’s (WMA) Charles Redd Center for Western Studies Award for Exhibition Excellence was a tremendous honor for the entire Overdrive team. This project was full of unexpected challenges that were overcome as a result of the nimble ingenuity and tireless efforts of colleagues throughout the institution. The recognition from our WMA peers was a profound endorsement of our ambition to create a vivid experience that would engage, inform, and delight museum visitors with underappreciated dimensions of L.A.’s complex architectural legacy. 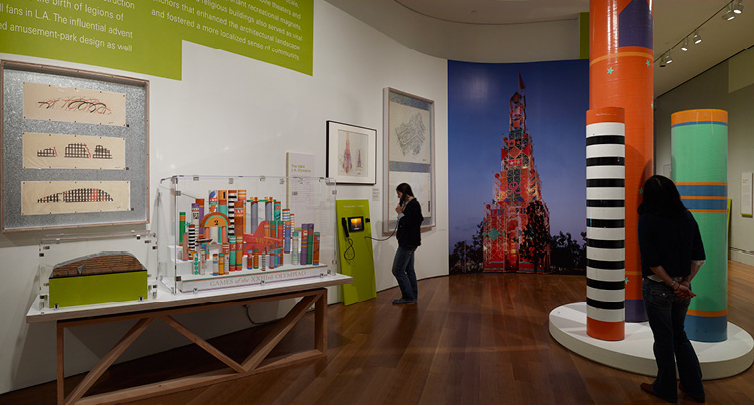 Within the 'Community Magnets' section, there are a variety of objects to tell the story of the 1984 Los Angeles Olympics.

The exposure that Overdrive received as a result of this important prize bolstered the National Building Museum’s presentation of the exhibition in Washington, D.C., which opened soon after the award’s announcement. The WMA buzz factor also resulted in increased traffic to the exhibition’s website, which still includes 23 videos highlighting the region’s growth and impact through animated maps, lively historic film footage, and intriguing oral histories. Interest in the exhibition’s catalogue also grew, due to the vibrant WMA network’s awareness and promotion of the project. 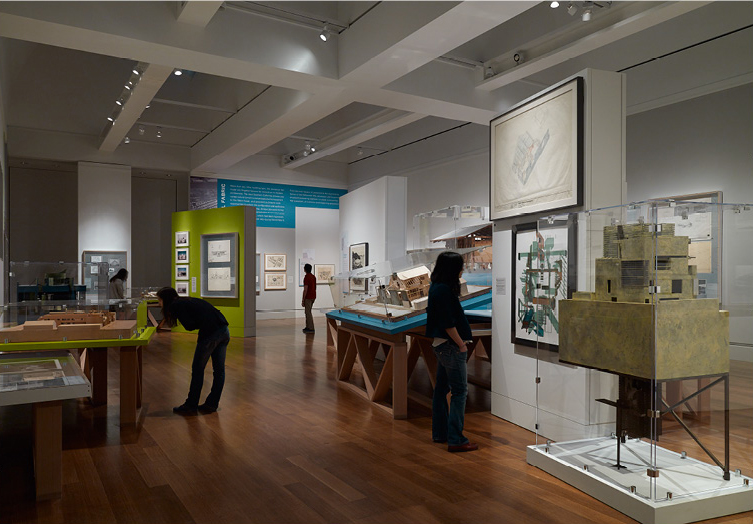 In the final gallery, the relationship of furniture and graphics define the space.

Every new exhibition provides an institution with the chance to redefine how complicated ideas and unique material may be presented to diverse audiences. The strength of the WMA community encourages us all to forge ahead with our ongoing goal of creating inspiring narratives and stimulating environments that spark fresh insights and cultivate meaningful moments of interaction. My colleagues and I are extremely grateful for the WMA’s support, and we look forward to exploring all of the compelling contributions from this year’s Charles Redd Center Award nominees.

Learn more about the Award here.

Christopher James Alexander is the assistant curator of architecture and design at the Getty Research Institute. Since arriving at the Getty in 2004, he has co-curated the exhibitions Overdrive: L.A. Constructs the Future, 1940–1990 (2013); Julius Shulman’s Los Angeles (2007); Julius Shulman, Modernity and the Metropolis (2005); Bernard Rudofsky: What Would Intrigue Him Now? (2007); and the Getty’s installation of Lessons from Bernard Rudofsky (2008). He is the co-editor of Overdrive: L.A. Constructs the Future, 1940–1990 (2013) and the author of Julius Shulman’s Los Angeles (2011). Alexander earned his M.Arch degree from the University of California at Los Angeles and B.A. in Fine Arts and Art History from The George Washington University.