Last October, I was fortunate enough to attend the Western Museums Association's (WMA) 2014 Annual Meeting, in large part due to receiving the Wanda Chin Scholarship. As a recent graduate, I could not have afforded all the expenses of travelling to the conference without it. A huge thanks to the donors, the scholarship committee, and everyone who helped put on an amazing Annual Meeting.

Even being warned to "Expect the Unexpected" (the theme of the WMA 2014 Annual Meeting), I was shocked by my first visit to Las Vegas. Looking at the pre-conference program, I wasn't expecting to come across too much content regarding the relationship between museums and Indigenous communities. However, on multiple occasions I heard about the inspiring struggles and successes museums (and those of us lucky enough to work in them) have had in connecting with the diverse Indigenous communities throughout the west. But Las Vegas also reminded me that we have much farther to go regarding how the public views Indigenous peoples, and how museums can represent us.

In recent years, I’ve developed a passion for my own Métis heritage and become involved with various Indigenous communities. I've learned quite a bit since then, but learning is life-long and my journey for knowledge is far from over. There are multitudes of unique nations in North America (check out Aaron Carapella's Tribal Nation Maps for a general idea), each with their own language, culture, and traditional knowledges. Likewise, each individual Aboriginal person has their own opinions and viewpoints, and the opinions expressed in this blog are my own. As James Pepper Henry (Director/CEO, Heard Museum) said during the “Speaking for Others” session, no one person can represent a whole group of people.

After being so inspired by the 2014 Annual Meeting, it was a true shock to experience cultural appropriation outside of the conference. I mean, I've read about it sure, but I never thought I'd see someone in a headdress outside of Coachella, a Kardashian birthday party, or a R*dskins tailgate (#ChangetheName).

If you've ever walked down the Strip, you've probably seen the various friendly "celebrities," cartoon characters, and showgirls conveniently willing to pose for a photo with you (for a price)! It was all hilarious until I saw the local "Indian." The man wore nothing except skimpy underwear, boots, and a crude copy of a Plains headdress. The headdress is a restricted item even in Plains cultures, and each eagle feather is a huge honour earned through a great achievement. He also held a drum, whose beat is often called the heartbeat of my people, and every time I hear the drumbeat the most powerful feeling takes over, overwhelming me with sadness for our past and joy for our future. Him buying a drum from a knock-off store (Indian Arts & Crafts on Fremont street, anyone?) and carrying it around with his costume is fine. The drum is used by many cultures and musical acts around the world—it is not a restricted symbol like the headdress. But his drum-carrying saddened me, as it was connected with the rest of his ignorance. What was the man thinking by being nearly-naked? Was he thinking that it would get him more attention and therefore a few more bucks? He surely wasn't thinking about how his appearance would only perpetuate the stereotypes of a pan-Indigenous culture, and encourage the idea that mocking Indigenous groups is entertaining. I mean, hello!? Plains Nations from central Canada and the US wore feathered headdresses like that, not the local Indigenous tribes from the Nevada area. This is similar to the idea that all Indigenous cultures traditionally made dream catchers, lived in teepees, or carved totem poles. 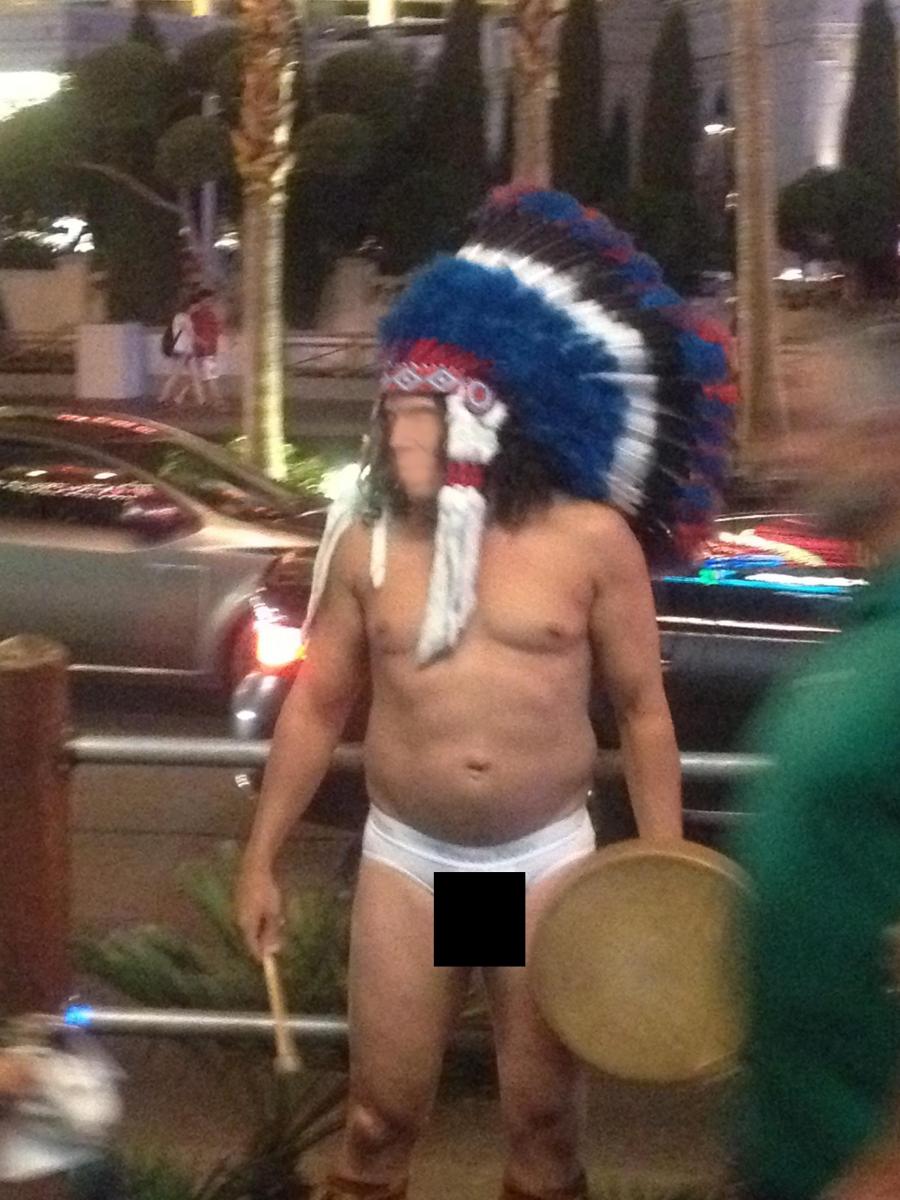 Is this how you would want to be represented?

And yet, my experience in Las Vegas at the WMA 2014 Annual Meeting was overwhelmingly positive (I swear)! This was a small but important incident in an overwhelmingly welcoming and productive conference.

Given my interests, it shouldn't be a surprise that I sought out opportunities to discuss museums’ relationships with local Indigenous communities throughout the conference. When conversations with fellow attendees turned to Native topics I was met with respect and interest. In the Exhibit Hall, I learned of institutions with a focus on Indigenous content, which are now top of my list of museums to visit on my next road trip. I met architects who worked with Nations across the west on tribal museums and cultural centres. I met many other attendees who currently or had previously worked in museums with Indigenous content, and made many fantastic friends and professional contacts.

All the sessions I attended were informative and I could pick out pieces that were applicable to my future career and me. The most popular session I attended was "Speaking for Others." Kathy Talley-Jones (Independent), Dana Whitelaw (High Desert Museum), Katie Williams (Northwest African American Museum), and James Pepper Henry each told of challenges and successes in telling others' stories, but there was overwhelming pressure in the question period to answer "but how do I connect with the local Indigenous groups?" It is not a question with a simple answer, but the fact that so many individuals and museums are asking this important question is encouraging. As mentioned earlier, each Nation and each individual is different, so each case of connecting with the local Indigenous groups will be unique—but we all need to work together to reach these important goals.

As an added benefit of the Wanda Chin Scholarship, I had the pleasure of attending the Indigenous Luncheon, where James Pepper Henry discussed in more depth how he worked to revitalize the Heard Museum, bring in a new, younger demographic, and make the collections relevant to the local communities. Two things he and the museum are working towards really inspired me. First was to bring Natives to life in the minds of visitors—to show them that we are still here. Next was the high priority that outreach has at the Heard Museum. Pepper Henry said that since the majority of American Indians won't make it to the museum, we need to take the Heard museum to the community. To repair the relationships with these communities, he urged us not to ask what communities can do for museums, but what museums can do for the communities. This is what all our museums should aspire to. Museums are unique institutions in which visitors freely choose to be educated, among other motives. As such, we are in a position to create positive social change. It is our duty as museums to help repair and strengthen ties with the original inhabitants of this land and improve cross-cultural relations for all our local communities. 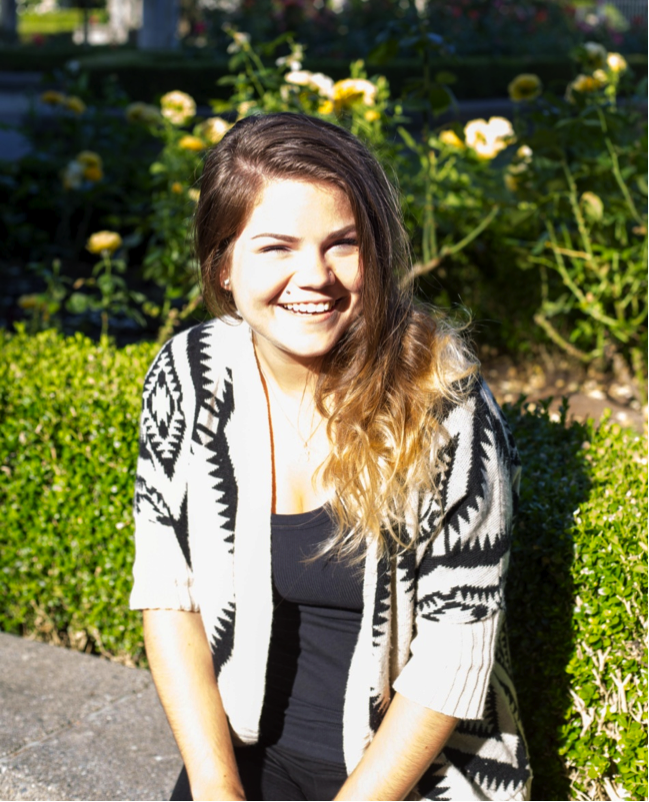 It heartens me to know that the attendees I met are professionals in all aspects of their lives, including showing respect to others, even when they don't necessarily know much about their culture. My passion is to improve relationships between Indigenous and non-Indigenous peoples, because we truly are all related. I encourage you not to be scared to "fail" in museums, engaging with Indigenous communities, or in everyday life, as we are all continuously learning. Ask questions when you are unsure. Show respect, and be prepared to acknowledge mistakes and move forward. The only way we can move together as allies is to realize how similar we all are, but also to respect our differences, and try to create a better world for all.

Shannon Tara Kraichy is a Métis (Cree, French, Ukrainian, Polish, Anishinaabe, Haudenosaunee) museum educator from Winnipeg, Manitoba, Canada. She has a Bachelor of Science in Paleontology from the University of Alberta, a Master of Museum Education from the University of British Columbia, and experience working as an educator in scientific, natural, historic, and cultural museums across western Canada.