Developing an exhibition of late 19th century paintings to be selected by the Internet took Seattle’s Frye Art Museum in many interesting directions. A turning point in the planning process came with the decision to use four leading social media platforms—Facebook, Instagram, Pinterest, and Tumblr—to determine the outcome of the exhibition.

Everyone registered with accounts on these social media sites was invited to vote on paintings they wanted to see hang in the Frye. Voting was open for 11 days this past August, during which 4,468 people cast 17,601 votes. 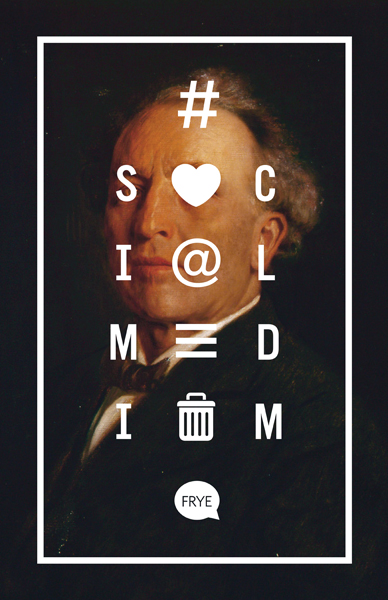 Previously, images of the 232 Founding Collection paintings lived as thumbnails on our website. To make sure the paintings were well represented digitally during voting, we color corrected every image and took new photos as needed. The #SocialMedium exhibition project means our website now hosts higher quality images and provides increased access to the museum’s collection and identity.

Using social media as a vehicle for voting led people to share these images with their friends and engage in conversation with people around the world. The winning artwork was Peacock by Julius Scheuerer. 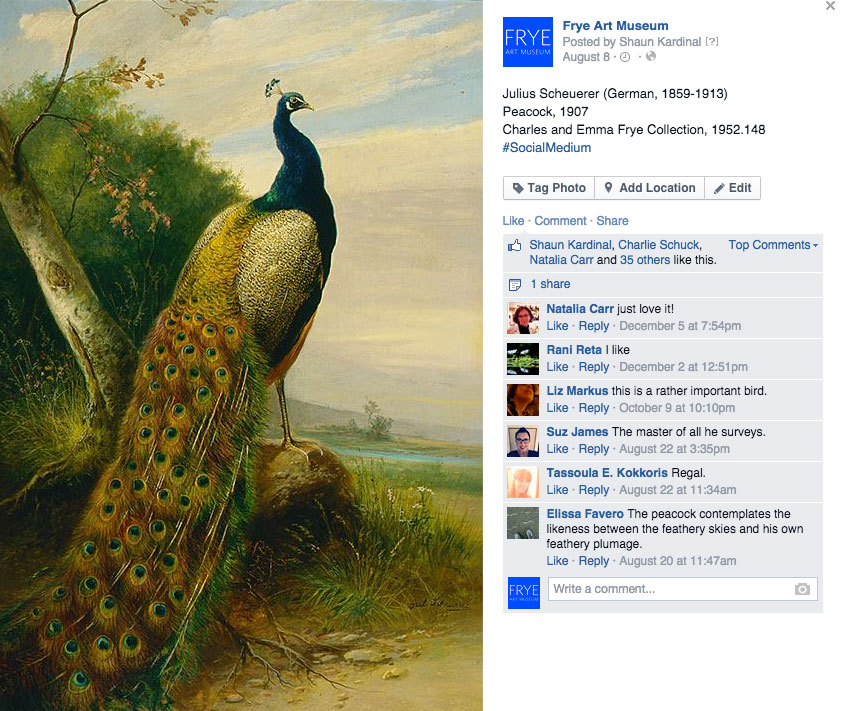 We learned, however, that the success of this project was not just about getting bigger numbers following our social media accounts. Earned media on sites and blogs around the world played an important part in driving interest in #SocialMedium. During the voting period, we were featured on Wired; subsequently we’ve had pickup in The Wall Street Journal, Huffington Post, and The New York Times, among other media. 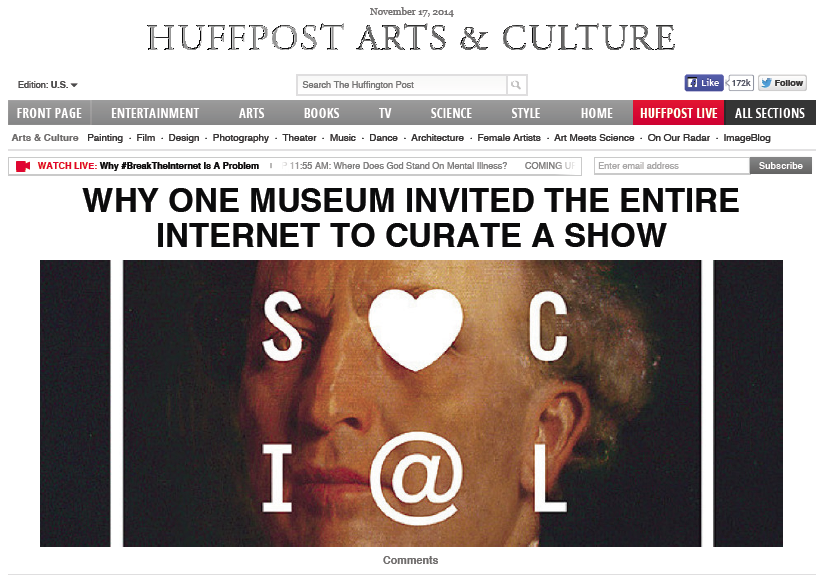 URL to IRL (in real life) is the language of exhibition. The exhibition design allowed us to complete the loop–IRL back to URL. A flat screen display in the gallery, streaming live feeds of Instagram and Twitter posts that are tagged #SocialMedium, provides visitors with a way of connecting to the concept of the exhibition if they hadn’t previously known about it. It’s also a way to engage in the digital conversation during their visit. 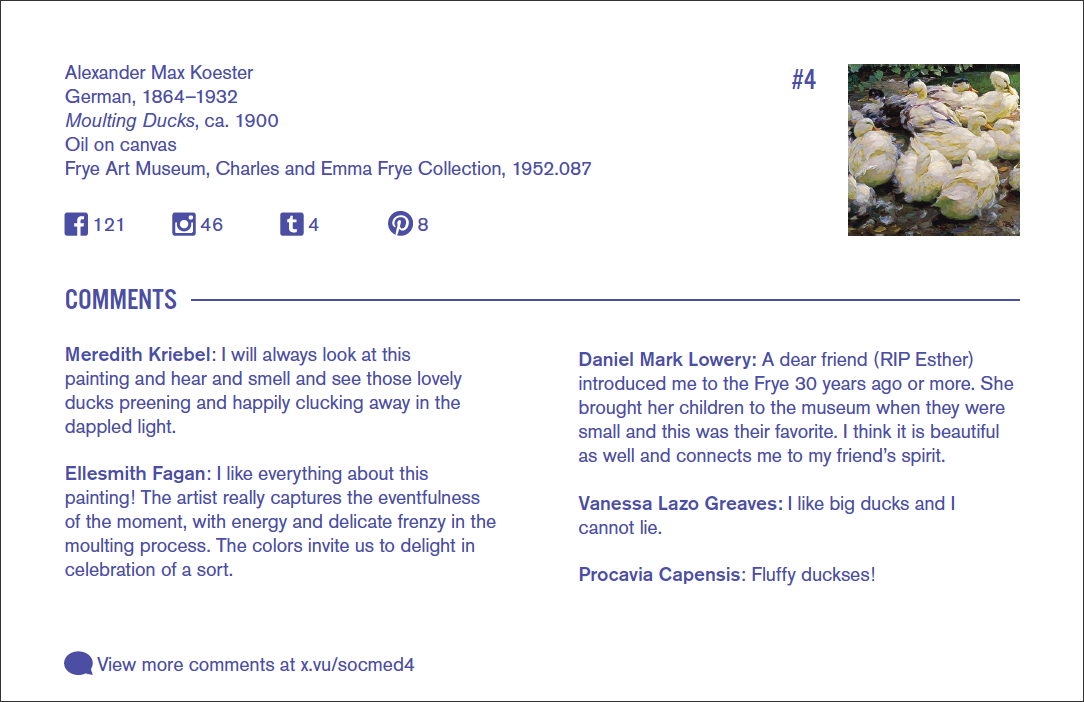 URLs on the exhibition labels prompt in-museum visits to our Facebook page, where visitors can read comments from other users, as well as leave their own. In order to provide an additional means of engagement, the Frye also produced a crowd-sourced audio tour that can be accessed by visitors for free on any mobile device. 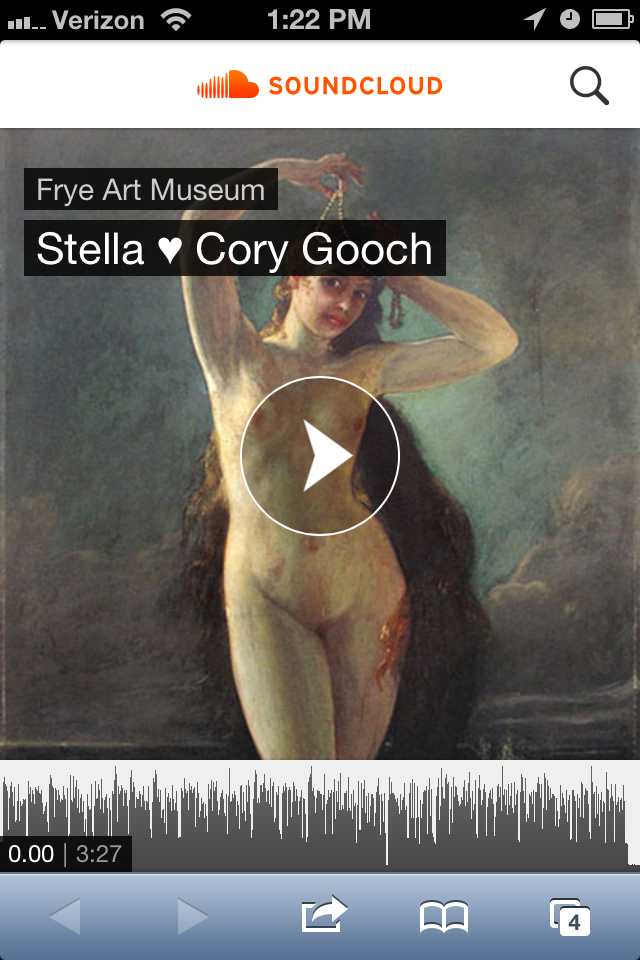 The majority of the 40 paintings in #SocialMedium are among the most notable and beloved in the Founding Collection. However, an outlier is Stella, a painting that has never before been shown and required much restoration. (Hear about this painting from Cory Gooch, Frye Collections Manager, on the audio tour.)

Access is a core value and the driving force behind the Frye Art Museum and this exhibition. In local and national news coverage, #SocialMedium has sparked a debate around concepts of curatorial practice and the role of the art institution in the digital age. But, as Jo-Anne Birnie Danzker, Director of the Frye Art Museum remarks, the Internet has both the wisdom of the crowd and good taste.

The conversation around #SocialMedium is worth having; the Frye is glad to be participating in it. We note that this conversation is taking place on the Internet. It’s where people gather now, specifically on social media. #SocialMedium is one experiment among crowd-curated exhibitions around the globe, investigating how museums today use virtual gathering places as a space for looking at and discussing art. The Frye’s #SocialMedium is a forum for ongoing engagement that investigates bridging digital and physical spaces.

Chelsea Werner-Jatzke is the Communications Associate at the Frye Art Museum. Besides managing the Frye social media presence and project managing the production of promotional materials, she and her department worked closely with the curatorial team to execute the #SocialMedium exhibition concept. She has presented panels at the Association for Writers and Writing Programs conference and will be presenting as part of the Nonprofit Leadership Series for the Center for Non-Profit success in 2015. She has an MFA from Goddard College and BFA from The New School.