The Presidio Trust is incredibly honored that EXCLUSION: The Presidio’s Role in World War II Japanese American Incarceration is the recipient of the 2018 Charles Redd Award from the Western Museums Association. The award is a recognition of our collaborative work with our partners at the Fred T. Korematsu Institute and National Japanese American Historical Society, and our commitment to interpreting difficult history and exploring its contemporary relevance.

During World War II, the Presidio of San Francisco—the Army's Western Defense Command—played a pivotal role in the unjust incarceration of 120,000 Japanese Americans, purportedly in the name of national security. From an office at the Presidio, Western Defense Command leader Lt. Gen. John L. DeWitt issued 108 Civilian Exclusion Orders, implementing President Roosevelt’s Executive Order 9066. With the influence and assistance of other military leaders, this extreme approach to national security won out over more moderate voices in the bureaucratic struggle among the War Department, Justice Department, and Executive Office. Decades later, this decision was decried as a “failure of political leadership.”

EXCLUSION invites visitors to investigate the choices—both personal and political—that led to this dark chapter in American history. How did leaders arrive at this decision? How did Japanese Americans respond to the violation of their civil liberties? And what, as a nation, have we learned that can help us address the present-day issues of immigration reform, racial profiling, and mass incarceration?

Today, the Presidio of San Francisco is a 1481-acre national park site. At the heart of the park, the historic Presidio Officers’ Club has been repurposed as a museum and cultural institution welcoming all and showcasing the Presidio's role in shaping and serving the nation. Special exhibitions at the Officers’ Club explore the Presidio's heritage and allow for fresh perspectives and a deeper exploration of the topics and themes presented in the museum’s permanent exhibition. They examine how and why the past matters and inspire civic engagement by fostering an understanding of the ways in which the Presidio’s heritage is relevant today.

In developing EXCLUSION, Presidio Trust staff worked with community collaborators from the Fred T. Korematsu Institute and National Japanese American Historical Society. Both institutions are public-serving organizations also located at the Presidio, with missions relevant to the exhibition subject. As collaborators, they offered deep personal significance and cultural expertise on the historic events and their contemporary relevance.

One thing we heard repeatedly from our collaborators was that as a federal agency operating the national park site where the Civilian Exclusion Orders were issued, we were uniquely positioned to explore the story of the government’s own actions in the 1940s. So the central focus of the exhibition—both conceptually and physically—is just that. 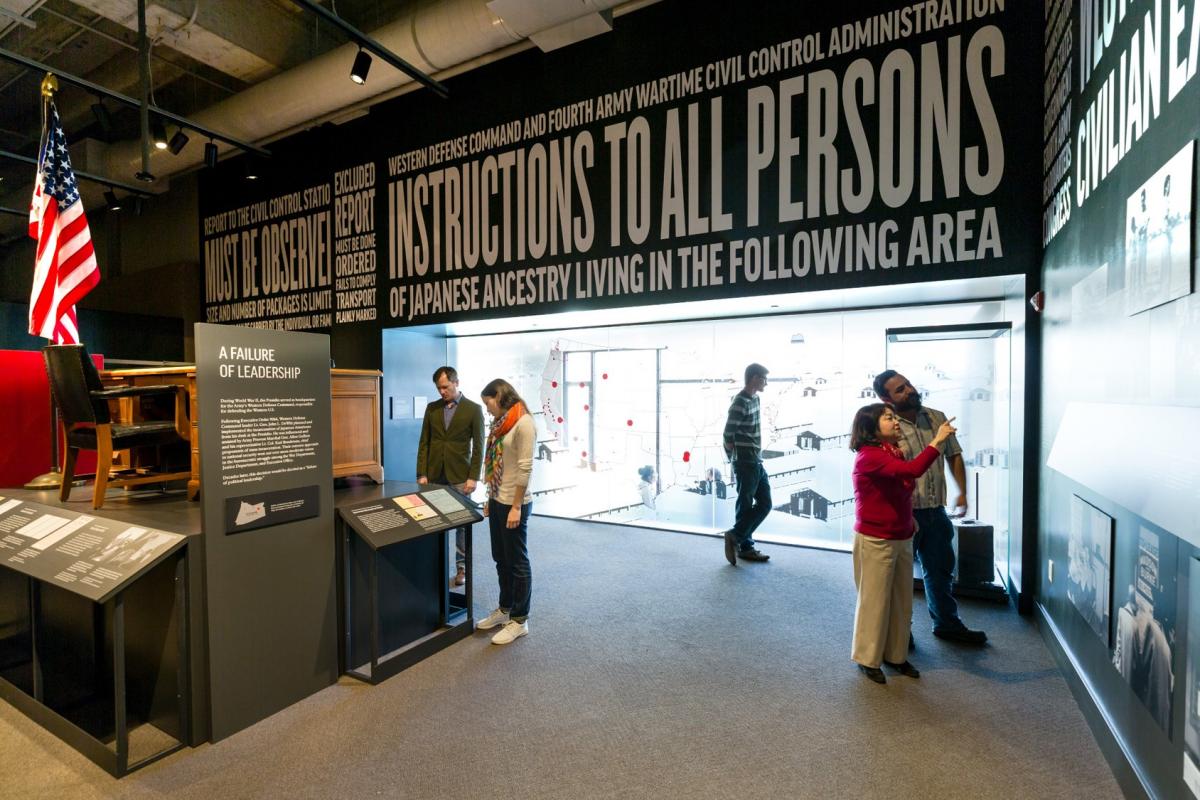 The exhibition explores the government’s role in the mass incarceration as informed by government findings, current historical and curatorial scholarship, and the Japanese American community.  The perspective and positions we take in the exhibition are derived from the key findings of the Congressional Commission on Wartime Relocation and Internment of Civilians, which determined in 1982 that the mass incarceration “was not justified by military necessity” and was “a grave injustice,” and that the true causes were, “race prejudice, war hysteria and a failure of political leadership.”[1]

One installation in the exhibition displays en masse the names of the initial 109,000 Japanese Americans imprisoned in the ten main incarcerations sites. The floor-to-ceiling display lists names from a government database derived from forms completed at the beginning of the incarceration. Our curatorial intent was to show the scale of the human impact of mass incarceration. What we found after opening was that many visitors interact with the installation in a more personal way: to find their names and the names of family and friends. The installation has, in a way, become a site of pilgrimage.

But some visitors experienced frustration: names they were searching for were too high to see, misspelled, or missing entirely. So we made post-opening modifications to increase transparency and accessibility. New panels explicitly address the difference between design and curatorial intent and actual visitor experience. We added a flipbook with the same listing of names, making it easier to look up loved ones. And we added more detail about the historic government data behind the installation and a takeaway with additional public resources. 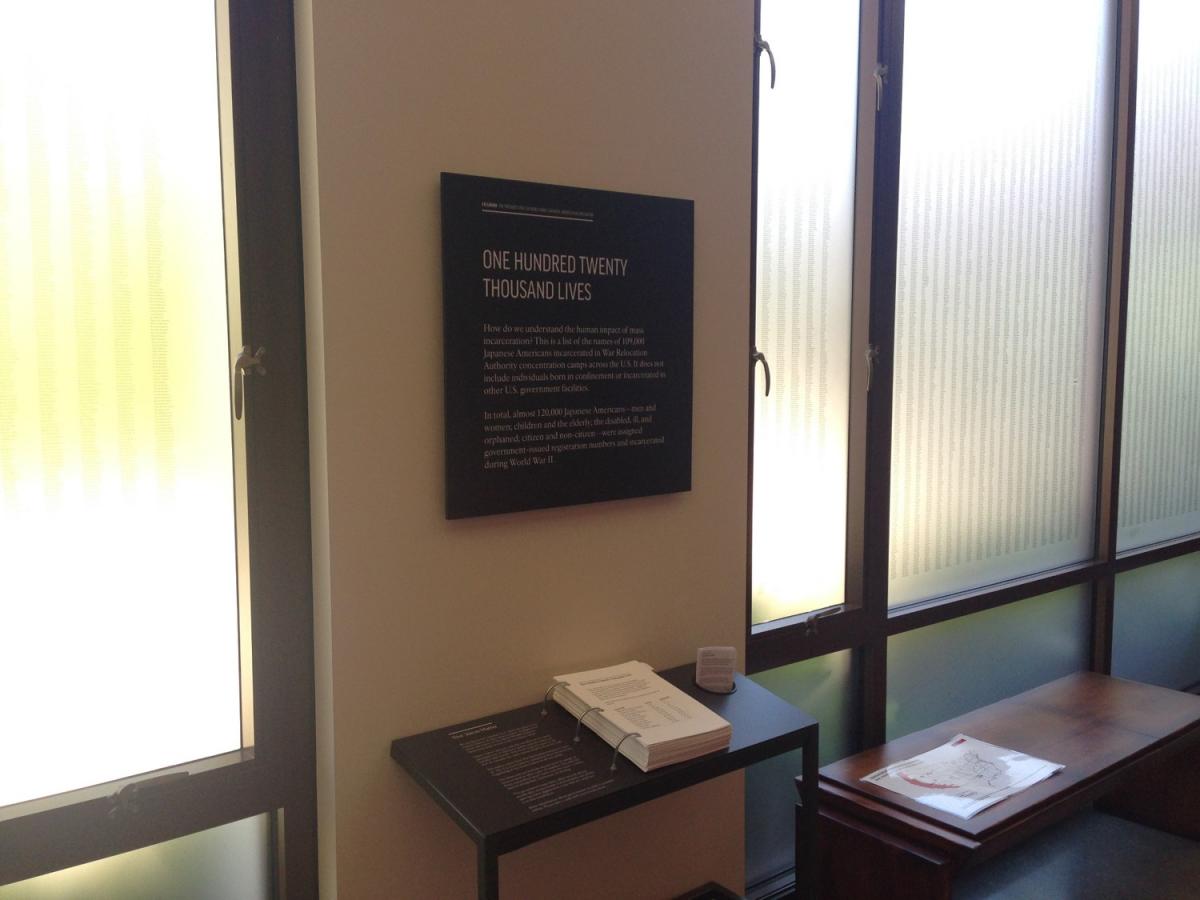 Another element of the exhibition was explicitly designed to facilitate visitor participation. “Your Voice Matters” interactives include prompts that present non-partisan issues of civic engagement in democratic society. Words and phrases embedded in each station reflect language used in mainstream news reports. Visitors are invited to engage in dialogue by reading and writing reflection cards. In creating these interactives, we view our role as conveners of civic dialogue, creating a safe space where visitors can draw their own insights into contemporary issues through past history, where they can explore the power of individual voices in the democracy of the United States. 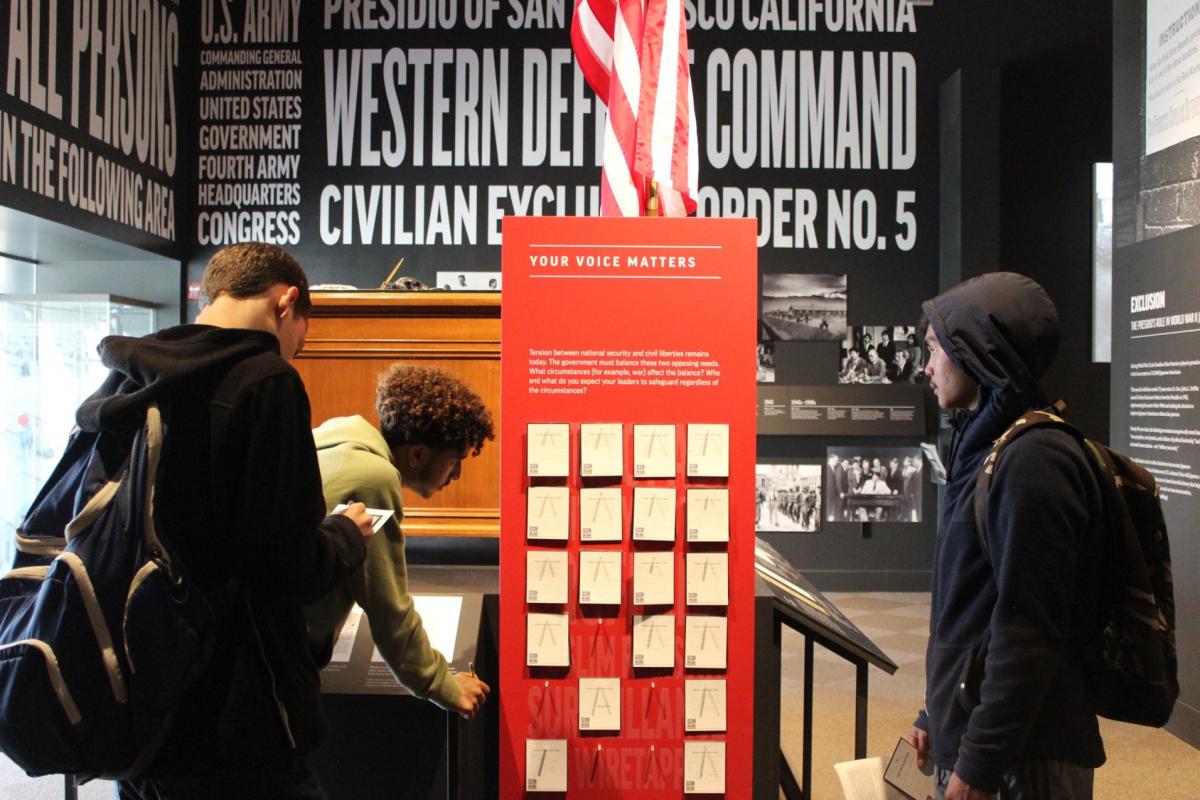 Visitor engagement with “Your Voice Matters” interactives reflects the continued relevance of the exhibition and of the issues it explores. These interactives are one of the most popular elements of the exhibition—not only because of the opportunity to for visitors to share their own thoughts but also to read others’ contributions to the collective dialogue. This co-created content includes family history, reflections on the current state of the world, and inspired calls to action. Here’s a small sample of cards—since opening, more than 2500 visitors have contributed their voices to the exhibition: 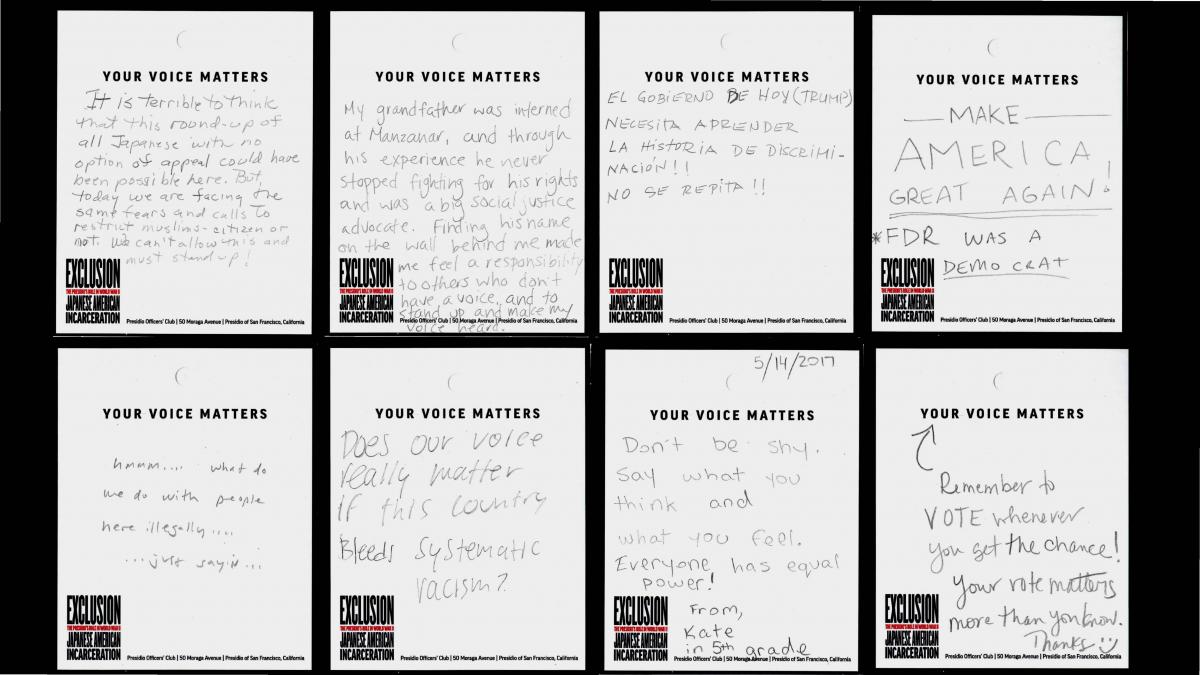 The complex work of addressing difficult history head-on, of facing uncomfortable truths and living into that discomfort, is a fundamental underpinning of our curatorial approach at the Presidio. We work to create a safe and inclusive space for visitors. A space for freedom of expression and civic engagement, where all voices matter. Where respect and dialogue—sharing with the intent of learning—are the cultural norms. We value community participation as a way of sharing and democratizing power and knowledge creation, whether this is developing co-created exhibition content, or being open to critical feedback and transparent in our response.

Ultimately, EXCLUSION is a reminder that the past is still with us. These issues—mass incarceration, immigration reform, and racial profiling—are not resolved in our national dialogue. As a national park site, we fulfill our goal of preserving and interpreting the Presidio and serve the public best when we welcome everyone to explore the legacy of our shared national heritage in a space where each voice matters.

Liz Melicker is Supervisory Curator at the Presidio Trust in San Francisco, California. In addition to EXCLUSION’s major collaborators, she would also like to thank additional community members and organizations that helped shape the exhibition and public programming; the Trust’s partners at the Golden Gate National Recreation Area unit of the National Park Service and the Golden Gate National Parks Conservancy; and of course staff and interns from across the Presidio Trust.

To learn more about the exhibition, visit www.presidio.gov/exclusion.