This summer at the UBC Museum of Anthropology (MOA), public tours commenced for a bold new exhibition called Claiming Space: Voices of Urban Aboriginal Youth. Curated by Pam Brown, Claiming Space features contemporary art by young Indigenous artists from around the world. It opened on June 1, 2014. This summer, museum visitors had opportunities to tour the exhibition with six urban Aboriginal youth in the Native Youth Program (NYP), a seven-week program in its 35th year at MOA.

Each year, six youth from the Greater Vancouver area are selected to participate in the NYP and learn various aspects of working within a museum environment. They give public tours, do research projects, and participate in presentations and workshops by MOA staff. Indigenous guest speakers and artists also work with the interns to help them complete arts- and media-related projects. Most importantly, the youth have an opportunity to connect with each other in a supportive environment as they develop new skills. Brown’s work as Director of NYP inspired her to develop the Claiming Space exhibition, along with artist/filmmaker Elle-Máijá Tailfeathers, Curatorial Assistant.

Claiming Space provided a new focus for this summer’s NYP interns as they developed programming around this exhibition. Museum visitors were able to hear Aboriginal youth present and respond to artwork produced by other Aboriginal youth. 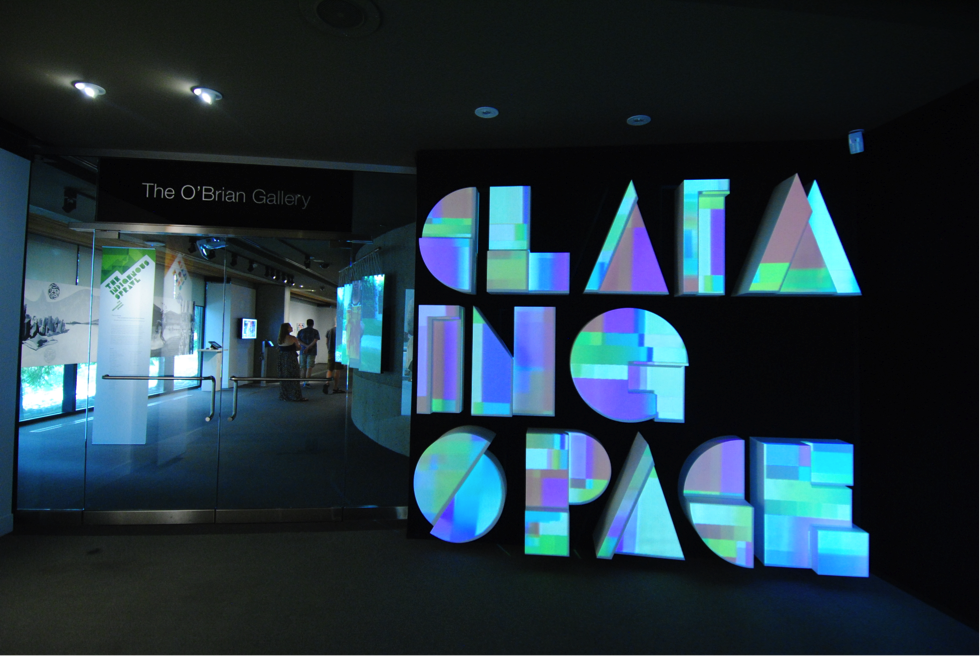 In the first two weeks of the internship, NYP program staff assisted or trained the interns to give tours by fostering engagement with contemporary art, and helping them develop an arts vocabulary along with presentation strategies. Just as the artists in Claiming Space created works in response to their lived experiences as urban Aboriginal youth, so tour preparation included learning about such issues as the missing and murdered Aboriginal women and the Idle No More movement, to ensure they would have a general understanding of the context. Another crucial aspect of their orientation was providing the youth with tools that would enable them to discuss challenging subject matter, such as racism and alcoholism, in a way that would be safe for themselves as well as museum visitors.

The youth began delivering public tours of Claiming Space in the third week of their internship. It’s been exciting to watch them develop insight into the artwork, and to witness their growth as they become more and more confident to engage with museum visitors. 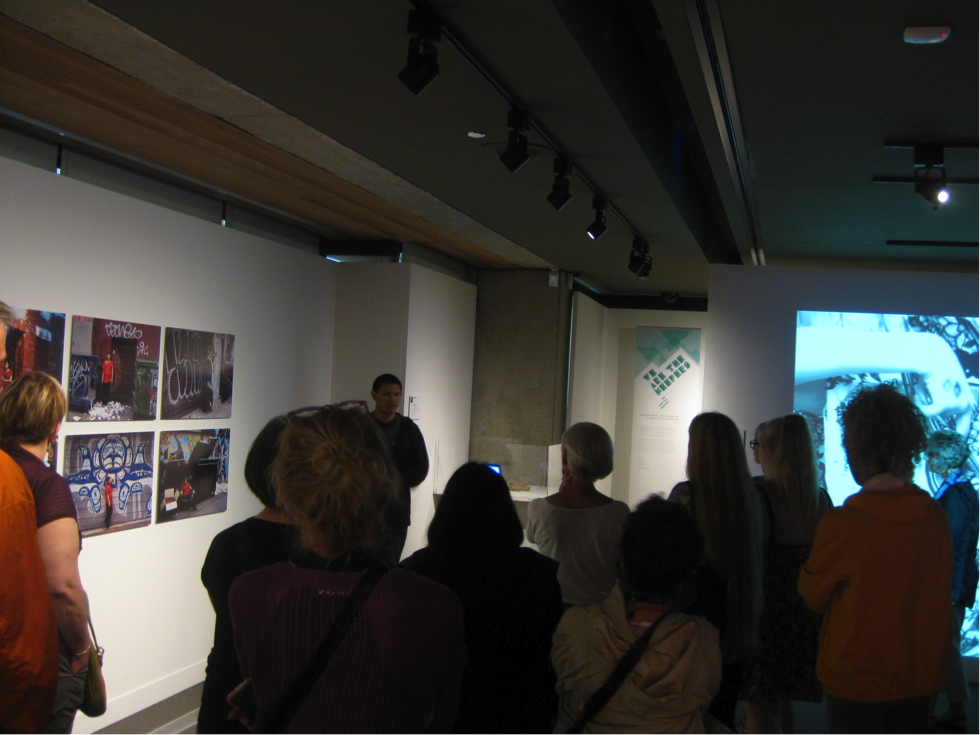 There have also been instances where NYP interns have made personal connections with specific works in Claiming Space.

The first thematic grouping in the exhibit is “The Indigenous Sprawl.” In this section, the artists present urban spaces as sites of ongoing colonization. NYP intern Tyson Hall chose an untitled poem by Anna McKenzie that addresses the issue of alcoholism within Aboriginal communities. He believes that it is important that this issue be addressed and communicated to the general public because of the impact and legacy of Indian residential schools on Aboriginal people. 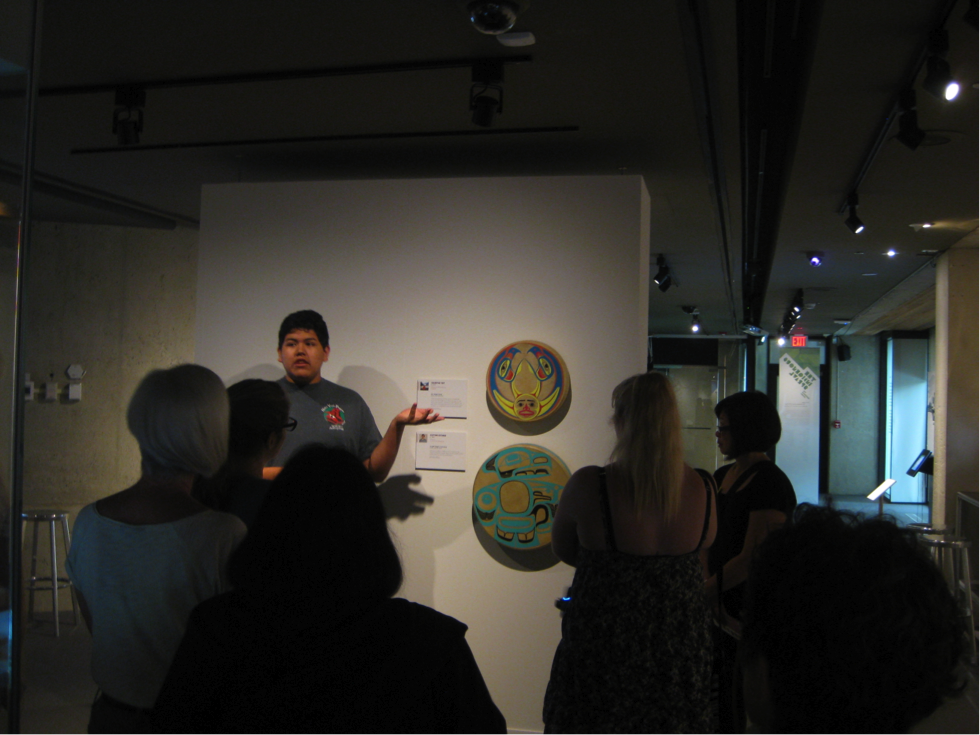 The third thematic grouping, “Adapting Our Traditions,” examines the way that traditions are morphing and adapting today. Carmen Lockhart, a returning NYP intern, relates to the frustrations expressed by Sámi artist Marja Bål Nango in her installation, Giesan Giesan. In the video, a young Sámi woman is trying to wrap traditional Sámi ties around her boots, and as she does so, a computer-generated female voice criticizes her actions, saying that she is doing it incorrectly, as though she were a non- Sámi woman, and that she is stupid. Lockhart explains that some urban Aboriginal youth know very little about their specific cultural heritage, and it can be difficult to find sources or people to teach you.

The final section of Claiming Space, “We Are The Keepers,” illustrates the impact of modern consumer culture on traditional values, as seen through the eyes of a generation whose daily reality is informed by globalization. NYP intern Sarah Wilson chose to remix an animation by Raymond Caplin, Traditional Healing, into a photograph. In Caplin’s animation, a young woman walks into a polluted black-and-white forest. She begins to dance, and as she moves, colour begins to seep into the frame as the plants begin to heal in response to her dance. Wilson likes this depiction of how traditional dancing made the pollution recede and the land come alive again—she says Caplin’s work made her realize that the singing and dancing that took place during the Idle No More protests were an attempt to heal the environment by stopping the pipeline expansion.

Although the young emerging artists in Claiming Space address many difficult issues in navigating their worlds, Pam Brown and Elle-Máijá Tailfeathers believe it is important to also acknowledge and celebrate their bold insights and exciting visions for the future. Just as many of these artists focus on themes of resurgence and revitalization of Indigenous culture, so too have the NYP interns during their summer at MOA.

Nicole Brabant is Cree Métis from Saskatchewan. Having more than a decade of experience working as a post-secondary Art, Art History, and English instructor, she is presently the NYP Program Manager at the UBC Museum of Anthropology.