The “Remnants of Boise” interface

Remnants of Boise is a virtual tour that showcases Boise’s history in a unique and exciting manner. It is a legacy project of the BOISE 150, a City program led by the Boise City Department of Arts & History (A&H) to commemorate Boise’s sesquicentennial with signature events, projects, and promotions throughout 2013. Remnants is, to date, the largest public history virtual tour in the world with over 40,000 lines of code and 340 images that examines the city’s first 150 years of growth and development. It’s stunning to look at, but also serves as an educational tool for exploring Boise’s history.

A&H started thinking about and planning the project in 2010, but the bulk of the work was accomplished in 2012 in preparation for the unveiling in April 2013. The first part of the project involved envisioning how we could tell Boise’s history in a visual way. The team responsible for the project included the Director of the A&H, me as project manager and content developer, and a contractor for the project. Another staff member provided extensive editing support. The project started out with:

The next phase consisted of: 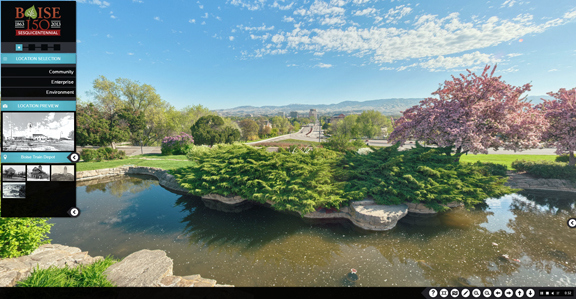 The entire project took about a year (February 2012—April 2013) from research and finalizing the contract, to more than a month of editing (from self-editing to sending the edits to another staff person to review and then editing again), handing over the deliverables to the contractor, leaving about six to seven months for the contractor to complete the programming. In between these major milestones there were several opportunities for internal review of the content for the tour. The one component that did not get enough attention was the beta-test, which should get at least an exclusive two week time period. The beta-testing that we conducted occurred concurrently with the programming.

Overall, what this process produced is an interface that visually and spatially explores Boise’s history in an interactive and engaging manner. Locations from the iconic to the obscure are explored through a modern day HDR photograph that rotates 360 degrees, a summary history, and captions for each photograph that furthers the narrative. Some of these stories include the almost forgotten Spanish Village, where you learn about Mexican-born Jesús Urquides and his pivotal role as a muleteer in Boise and the Idaho Territory; at Castle Rock & Tablerock, you learn of the tragic story of Boise’s Native Americans and their forced removal. Users can dig even deeper into the history of each location with the photographs—each historic photograph or map has a short caption that places it in context of the larger history of the site, and it rotates to the approximate place that photo is depicting. All of the locations are organized into three main themes: Community, Enterprise, and Environment. These serve as the BOISE 150 guiding themes and act as access points for Remnants’ participants to discover new and arresting narratives. 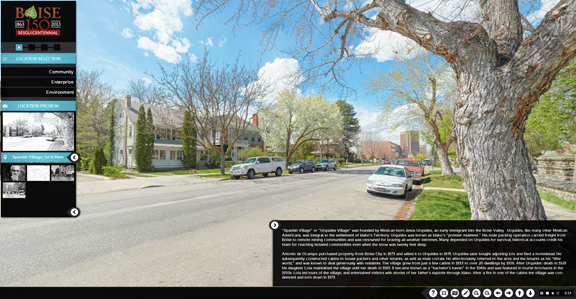 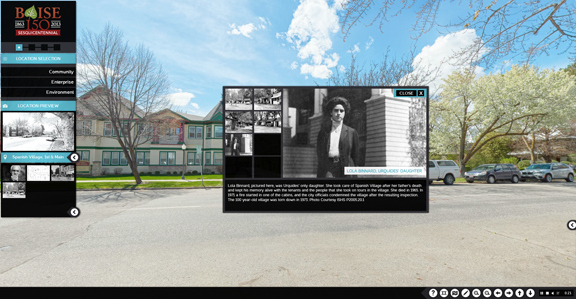 A historic photograph of Lola Binnard, who cared for the Spanish Village, within the “Remnants of Boise” interface

Remnants provided several lessons about what it takes to do digital history, many of which involved time. Digital history projects that have the scope of Remnants take a lot of time to complete, from the organization side to the contractor side. First and foremost we spent a lot of time planning for the project and securing funding. We set deadlines, both for ourselves and for our contractor. One of the most important things to consider during this stage is the amount of time that everyone thinks it’s going to take to complete the project. Once the amount of time has been decided work in some contingency time to handle unexpected issues or delays. Be sure to communicate with all people on the project about deadlines and work cooperatively on deliverables so deadlines can be reached. As organizations move into more digital projects, all of us will need to question our project formats and their longevity with the goal of creating something with a long shelf-life and that can be accessible in the future. Before embarking on digital projects, ask if it can be built in a way that can be easily transferred to new systems if possible. Above all, make sure your content, which is the most important part of any project, is solid and can be repurposed for use elsewhere if the technology portion of your project becomes obsolete. With each project comes ups and downs, and Remnants had its fair share. Despite this, Remnants accomplished the goals that A&H outlined for it and it continues to be enjoyed by the public. 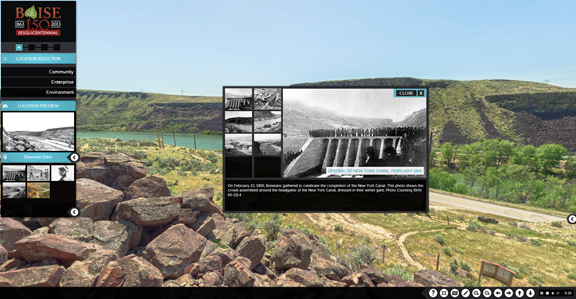 Brandi Burns is the History Programs Manager for the Boise City Department of Arts & History. She has a Bachelor of Arts degree from Idaho State University and a Masters of Applied Historical Research degree from Boise State University. Since being at the Department, she has established the first oral history program for the City of Boise, managed historical donations, created a virtual tour of the city (Remnants of Boise), and prepared the successful nomination of Boise as an Idaho Heritage City.