On April 7, 2015 I participated in an author panel discussion called “Writing about First Nations” as part of the Association of Book Publishers of British Columbia’s Read Local BC campaign. I am an associate professor in the department of anthropology and one of the curators responsible for the Pacific Northwest collections at the Museum of Anthropology at the University of British Columbia. Present with me were two historians and UBC colleagues: Drs. Jean Barman and Paige Raibmon. We came to this event concerned that a Native author had not joined the panel although a number had been invited. We three were acutely aware of our lack of Native status and anticipated the critique of yet another non-Native researcher writing about First Nations. Although the audience did not lob this charge at us, the subject of cultural appropriation was certainly present. 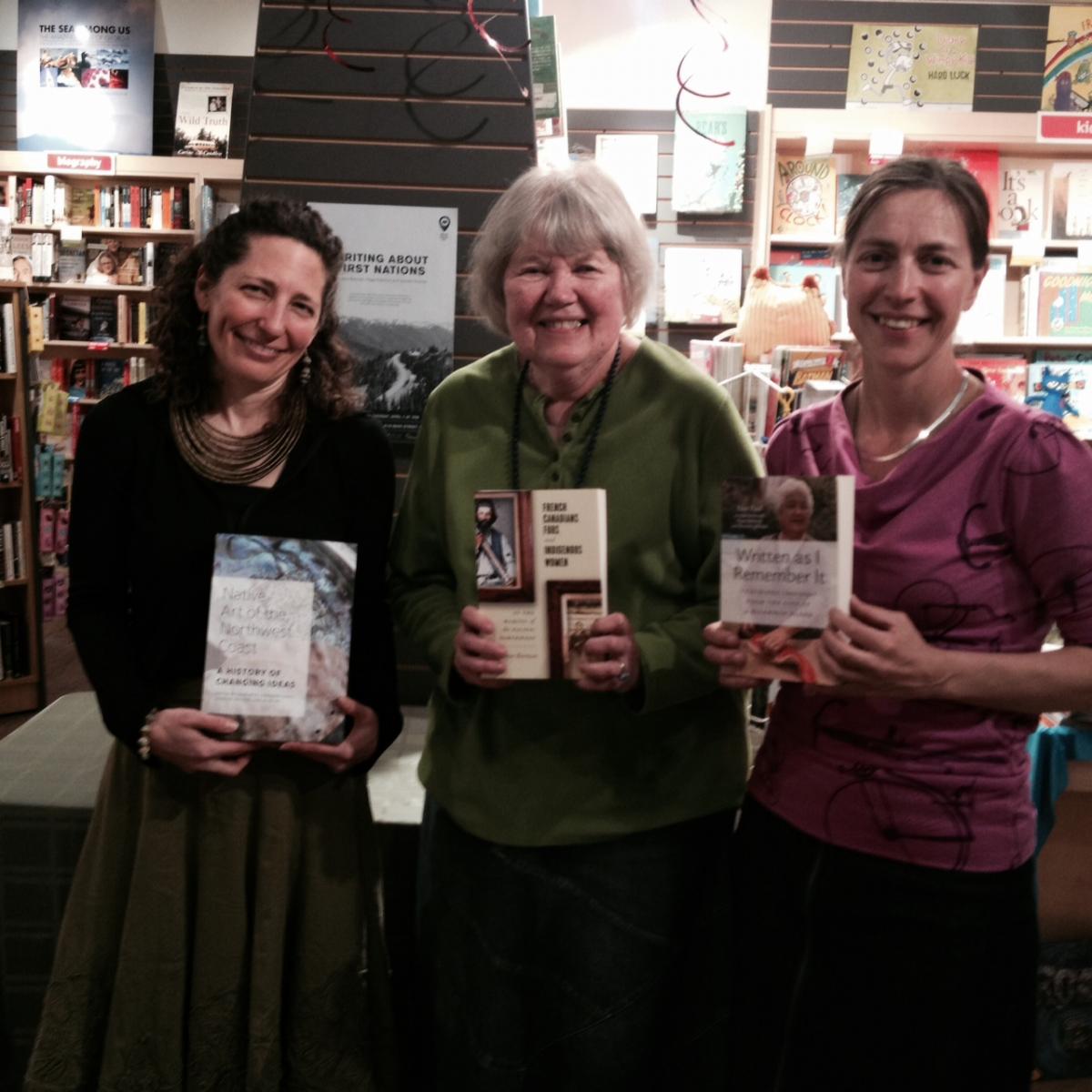 In fact, my own career has been invested in studying the power imbalances and ethics of writing about and representing First Nations in publication and museum display. The ambiguous and ambivalent position I felt as anthropologist during my doctoral research with the Nuxalk in Bella Coola, BC plays a significant role in my first book, Switchbacks: Art, Ownership, and Nuxalk National Identity (UBC Press 2006). Within, I expressed my anxieties around representing the Nuxalk from my decidedly outsider position. I wrote about the diversity of Nuxalk opinion on their identity and art and the impossibility of a First Nation-wide self-definition. I realized that “contemporary Nuxalk wish to assert their right to define themselves and to control the images that represent them…[However] I further argue[d] that art as identity construction is an invitation to dialogue because identities are never constructed in a vacuum: they must be recognized and validated by others” (2006:12). I posit that reception and even external representation are a necessary part of identity production. Potentially, there exists a role for researcher as cross-cultural translator or, at least, as receiver of messages about Native identity.

Later, I curated an exhibition and wrote a complementary book on a Kwakwaka’wakw carver at the request of his family named Kesu’: The Art and Life of Doug Cranmer (Douglas & McIntyre Press 2012). Asked to honor Kesu’ by writing about and displaying his artistic achievements and mentorship contributions, I worried about putting into the limelight this man who scoffed at the title “master carver.” I wanted to recognize him as the innovative “Indigenous modern artist” I thought him to be, but I did not want to confine him by my labels. I began both endeavors with the words: “How does one write about a man who hated to be defined?...A man, who wasn’t into ‘high prices or being famous’ but liked to say that he ‘doodled and whittled’ for a living?” (2012:15). I made my trepidation of the power of representation part of the story, and in this way I hope I respected Doug’s independence and aversion to being characterized. 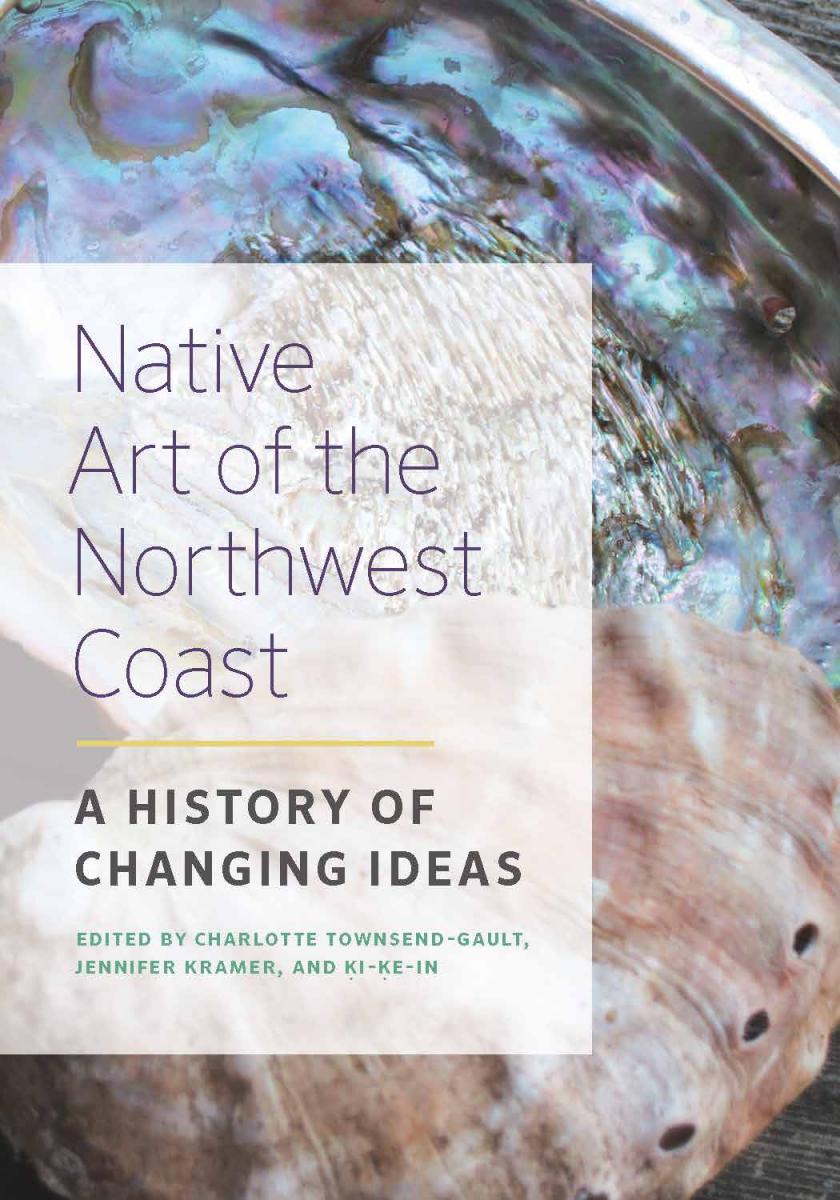 The book I discussed on April 7, 2015—Native Art of the Northwest Coast: A History of Changing Ideas (UBC Press 2012)—I co-edited with Charlotte Townsend-Gault and Ki-Ke-in (Ron Hamilton). An anthology that represents 250 years of writing about First Nations Northwest Coast art, we wanted to explode the monolithic idea of “Northwest Coast Native art” seen through the lens of aesthetics. Twenty-eight Native and non-Native contributors wrote essays and selected excerpts for inclusion offering a plethora of voices from multiple disciplines—art history, anthropology, law, linguistics, film studies, archaeology and especially from the views of First Nations artists, cultural historians, and museum practitioners. Their variously themed chapters cover the breadth and historical scope of ways of knowing about these objects as curiosities, artifacts, tourist art, fine art, cultural belongings, repatriated treasures, and as other ongoing and changing names and descriptors.

This work is not about correcting historical inaccuracies with correct versions of history. Rather, in this over 1,000 page tome, we attempt to show the palimpsest of opinion and the influence of economics, politics, and geography by placing each excerpted author within their own biography and time frame. The intention is to demonstrate that everyone writes from a particular perspective and knowledge base, responding to previous representations, and motivated by specific agendas. This is reminiscent of Native artists and authors who feel discomfort and responsibility at the idea that they represent their culture not just themselves.

As editors, we found it difficult to send the text off for publication because the dialogues, debates, and critiques represented within are still being fabricated, deconstructed, and reconstructed—ever in flux. In realizing that there is no final answer to the meaning of First Nations Northwest Coast art, I also reach the understanding that there is no one right way to write about First Nations. Thus, there is no First Nations person, band, or nation who can give permission and ratify an interpretation as acceptable, accurate, or final. We compiled this book in the spirit of acknowledging all the ways of knowing and we think of it as a living, breathing archive. In retrospect, the anthology might have been better as an online blog, such as Wikipedia, with many people engaging because I believe we are in this engagement together, and we’re co-creating these products of representation.

What have my experiences taught me about writing and representing First Nations in books and museum exhibitions? Here are a few gathered thoughts, in no way meant to be comprehensive:

Jennifer Kramer (Ph.D. Cultural Anthropology Columbia University 2003) holds a joint position as Associate Professor in the Department of Anthropology at the University of British Columbia and as Curator of the Pacific Northwest at the UBC Museum of Anthropology. I strive to be both a collaborative museologist and a critical museologist. In this way, I merge practitioner/curator and theoretician/critic as I partner with Indigenous communities to create ethnographic writing, exhibitionary displays, and digital resources that try to feel as true as self-representation, but at the same time be aware and reflexive of the histories, structural inequalities, and contemporary politics in which we are all embroiled.

I research how and why representation is meaningful and often politically charged by studying the ways that visual culture gets variously defined within art galleries and museums, art market economies, world expos and Olympic Games, national and international legal systems, Indigenous cultural centres, schools and tourism sites. In this way, material culture can be mobilized to support or refute claims to identity, status, land, or resource extraction in powerful and evocative manners, which highlight complex social relations between individuals and between cultural communities."