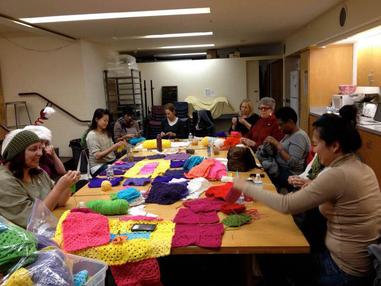 On May 25, 2013 the three-story façade of the Craft and Folk Art Museum (CAFAM), will be covered by a colossal handmade quilt comprised of thousands of “granny squares” – each individually crocheted by amateur crafters from around the world. A public art installation conceived by the group Yarn Bombing Los Angeles (YBLA) working with the CAFAM, this huge project was conceived to unite the craft community traditionally denied access to museum representation. YBLA is a collective of ‘guerrilla knitters’ staging public installations and performances since 2010. When YBLA put out the call for people to create and contribute a crocheted square for the CAFAM Granny-Squared project, never did they anticipate the massive response – 18,000 of the five-inch crocheted squares arrived over a five-month period from 50 states and 25 countries! The people donating the squares are as diverse as could be, as YBLA “Core Member” Arzu Arda Kosar explained, “We received crocheted granny squares by high-schoolers interested in the ‘handmade’ in the digital age, from seasoned crafters who have been crocheting for decades, and from others who learned to crochet just to participate in this project.” Most people submitted one piece for the project, but 50 people created over 100 squares each, with two individuals coming up with 600 pieces each. According to Kosar, “The overwhelming response to the project turned it into an organism of its own. Opening the packages, documenting and registering each square in a database, posting images on social media, sorting and storing material, and corresponding with participants online and in person became an intense full time job.”

Also developing an unexpected complexity was the fabrication and mounting of the huge quilt on the three-story façade along Wilshire Blvd, Los Angeles (LA). The group originally planned to informally mount the squares onto existing hooks and protrusions from the building, with the attitude that, if the City forced the Museum to remove the crochet, this set-back would be considered part of the performance aspect of the work. However YBLA and CAFAM soon developed such a commitment to the 500 dedicated granny square donors that it became evident they would have to take the installation of the project on the building to a more professional level. Kosar explained about the extent some of the crafters had gone to donate squares: because mail from Iran is sanctioned the thirteen granny squares created by ten people in Shiraz got to the US only through a complicated exchange (through non-sanctioned locations) of hands, between suitcases, and friends of friends; a neurologist in rural Turkey had integrated the crochet project into her patients’ physical therapy; and instructors at LA’s Braille Institute had guided the hands of their visually impaired students so they could also participate. With 18,000 granny squares representing every possible worldwide story, YBLA began scrambling to raise funds to properly mount the oversized quilt per LA City building, safety and fire standards – hiring a licensed contractor and structural engineer to develop an armature to properly support the three-story afghan and provide fire retardant covering. YBLA members produced a short promotional video, successfully launched a USA projects campaign, applied for grants, and even took on some part-time jobs themselves.

When the installation is removed on July 1st, the huge quilt will be disassembled into smaller blankets for donation to the homeless residents of LA’s Skid Row.

Any WMA followers interested in helping stitch together the granny squares into the massive afghan will have the last opportunity on May 18, 2013 at CAFAM http://www.cafam.org/education.html.