Reflections on the Arrival, Preparation and Display of Space Shuttle Endeavour

A Spaceship for all of us

With its arrival at Los Angeles International Airport on September 21, 2012 the Space Shuttle Endeavour began its longest and perhaps most socially important mission ever—inspiring millions of young people to be the very best in whatever they choose to do. 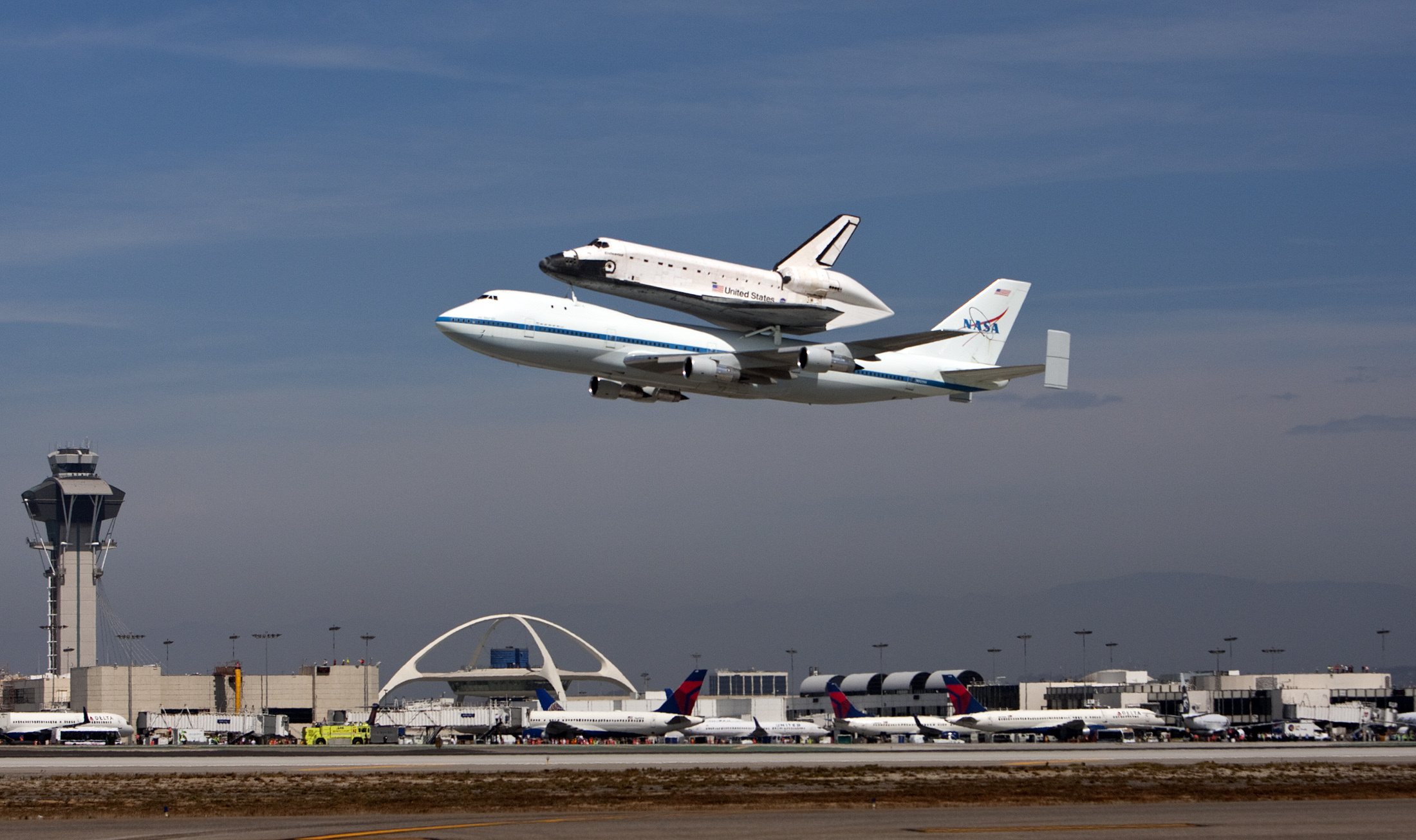 The Endeavour on the Shuttle Carrier Aircraft landing at LAX.

That mission formally began when Endeavour, atop its 747 Shuttle Carrier Aircraft, entered the Los Angeles air space and made a series of graceful flyovers and turns escorted by its two F-18 fighter aircraft. Most observers cheered. Others were speechless. Many cried.

The Endeavour flys above a crowd of onlookers.

Teachers reported that many school children stood frozen when they first saw the priceless spaceship atop its giant 747. Unable to move at first, they later chased after Endeavour as far at they could run just trying to be a part of it all. 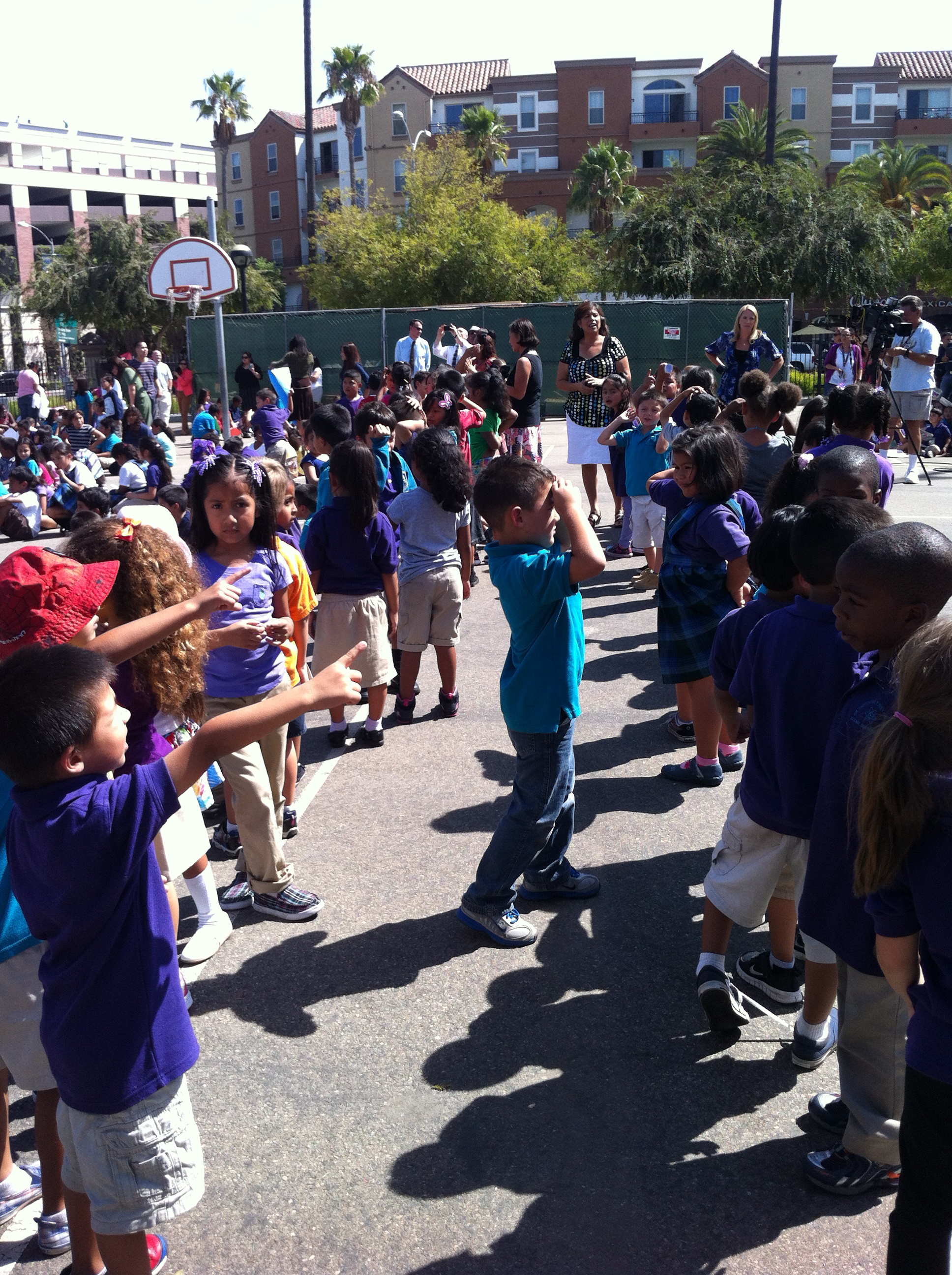 Kids at a playground looking at Endeavour.

Space Shuttles are amazing vehicles with their familiar shape recognized by virtually all Americans over the age of 10. This gives the California Science Center a huge advantage in its mission of inspiring science learning in everyone because the Shuttle operated for such a long period of time that it became “America’s Space Ship” for multiple generations. Kids, parents, grandparents and even some great-grandparents all recognize the Shuttle and witnessed its flights and missions over a period spanning 30 years. Endeavour truly is a spaceship for all of us!!

The Lady in Waiting

In the weeks following Endeavour’s arrival thousands of people visited the spaceship while she was stored inside the United Airlines hangar at LAX. 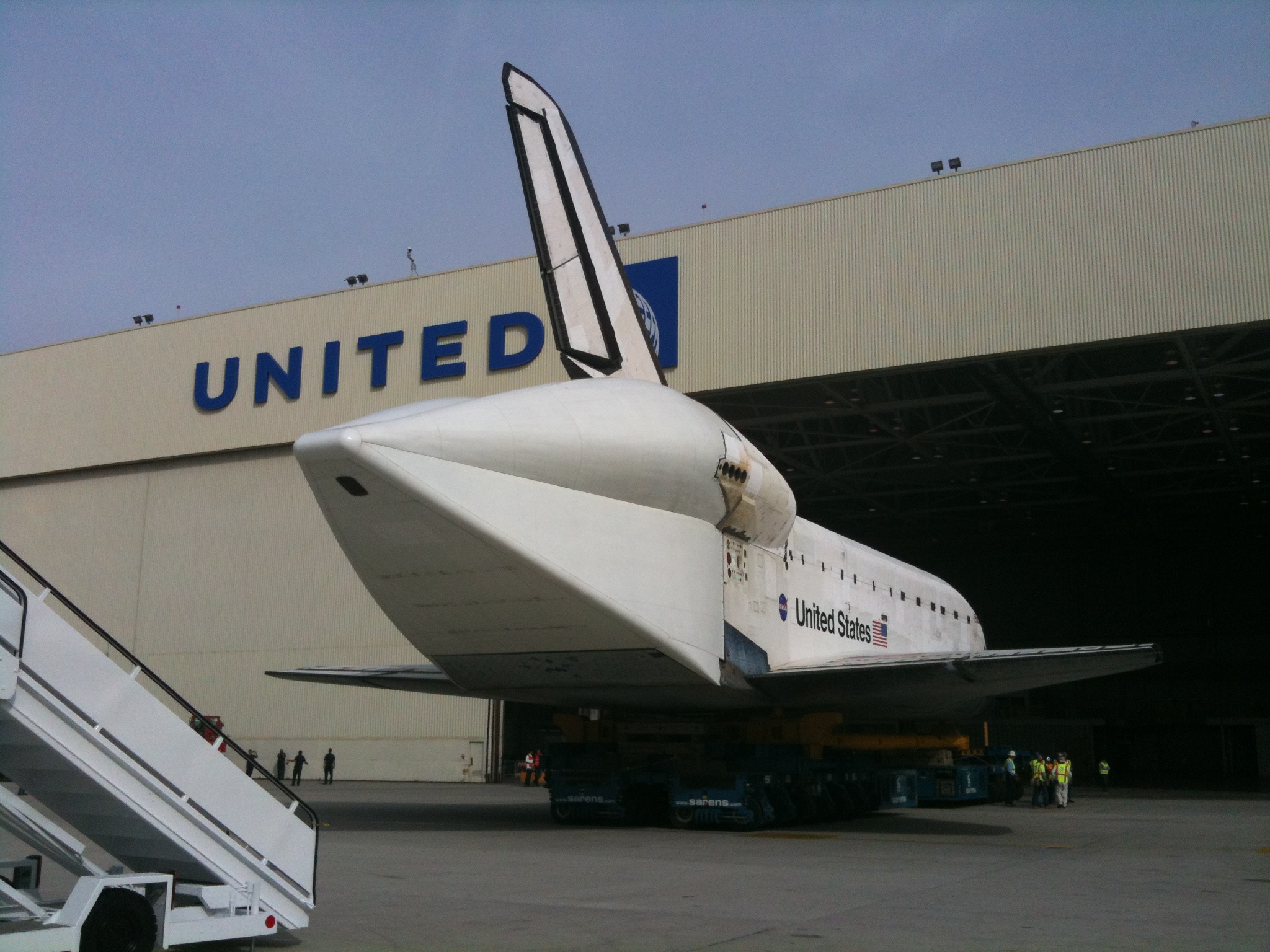 Outside the United hangar.

Special groups of all types made formal arrangements to view the Shuttle while others managed to talk their way into the hangar to peek at the strange delta-winged vehicle that was being prepared for its historic trip from LAX to the Science Center. 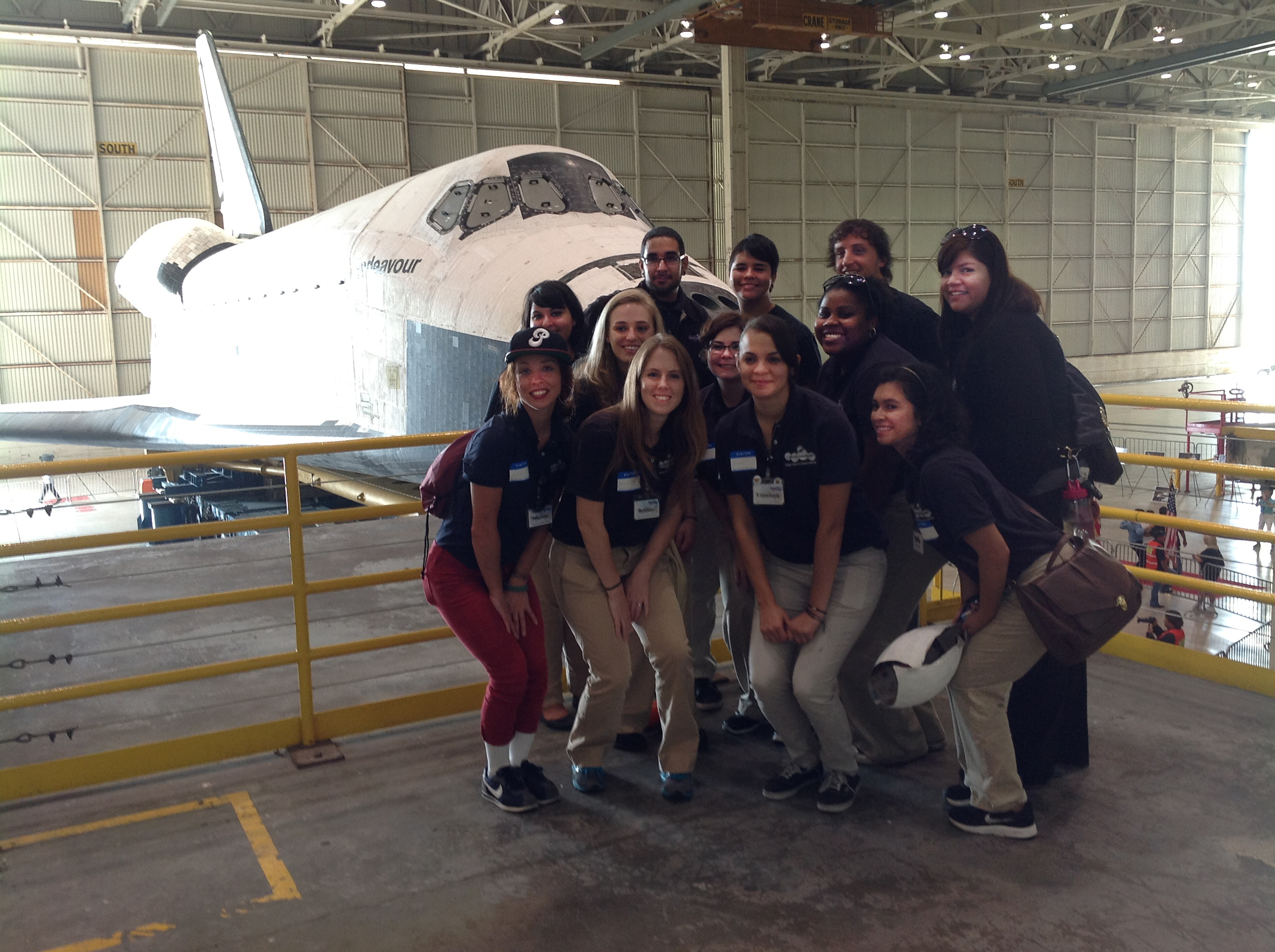 Visitors to the Endeavour at the United hangar.

During that period NASA technicians worked closely with us to position the main engine nozzles for final display since they had been placed in “tuck” position for the flight from Kennedy Space Center in Florida. 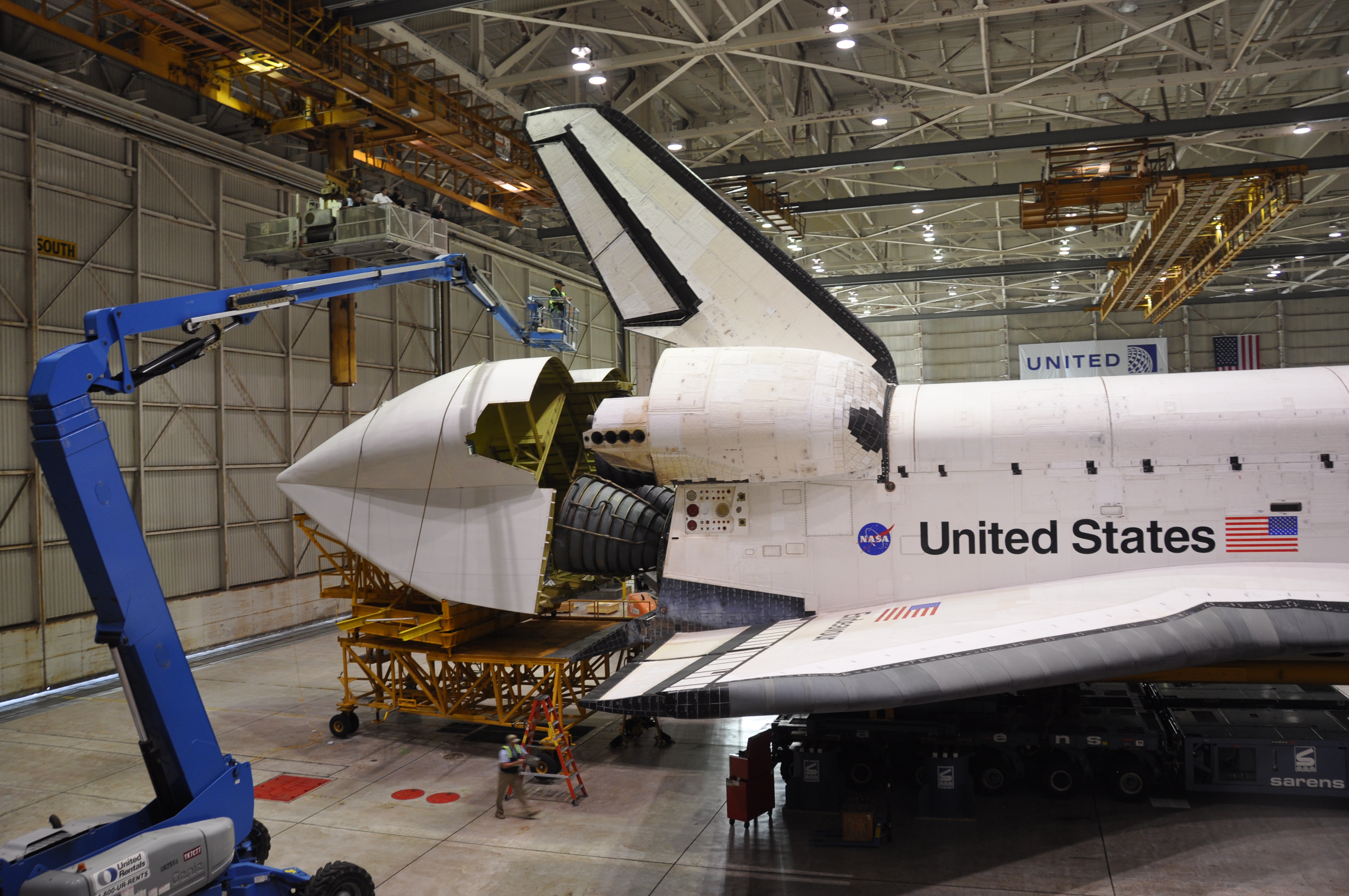 The tailcone being removed from the space shuttle.

The Orbital Maneuvering Engines (OME engines) had been shipped to California long before Endeavour arrived and these had to be attached to the spaceship. Finally, special interior preparations had to be made so that the middeck and flight decks were secured and prepared for the trip to the Science Center.

With the People’s Support

Nearly 18 months of preparation were behind us we moved Endeavour off the airport property at 11:30pm on the evening of October 11, 2012 for what would become a 68-hour non-stop journey to the heart of the city and its permanent home at the Science Center.

The scene was a celebration and it was intense. Twelve miles of city streets with numerous obstructions both overhead and at the wing tips lay ahead of the team and virtually every department in the cities of Inglewood and Los Angeles had to perform in order to pull this off—and this they did. 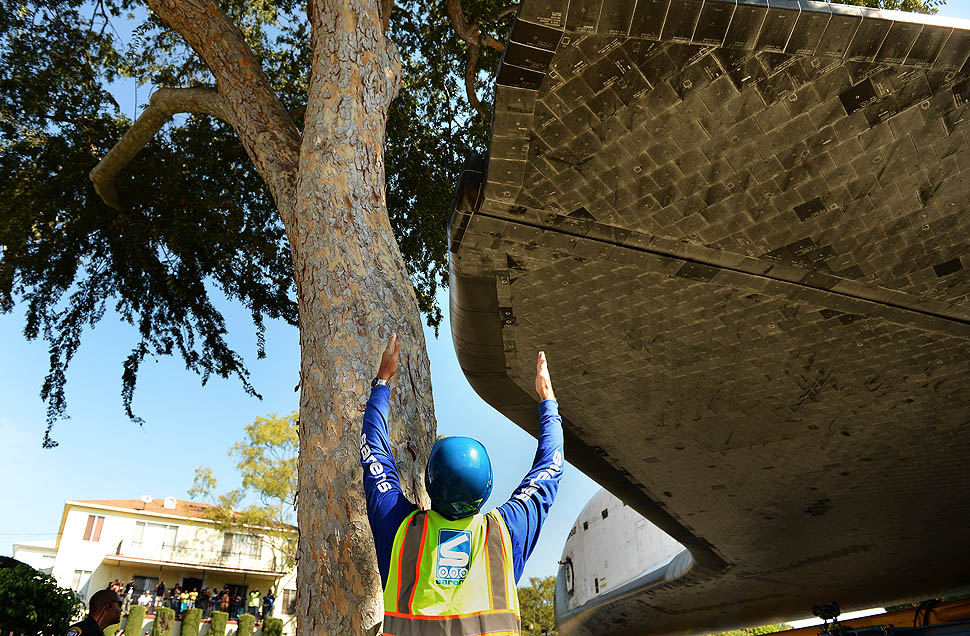 A crew member carefully guide the shuttle Endeavour past a tree along Crenshaw Drive in Inglewood, CA.

More importantly the people of these two cities, all 1.5 million who were estimated to have personally witnessed the move of Endeavour, had to assist in the move of the orbiter because there was simply no method for creating a protective cocoon around the vehicle. This was the most amazing and heartwarming part of the entire 68-hour procedure. Everyone along the route helped us care for the vehicle on its journey. When we had to stop for an obstruction, people cheered and waved flags. 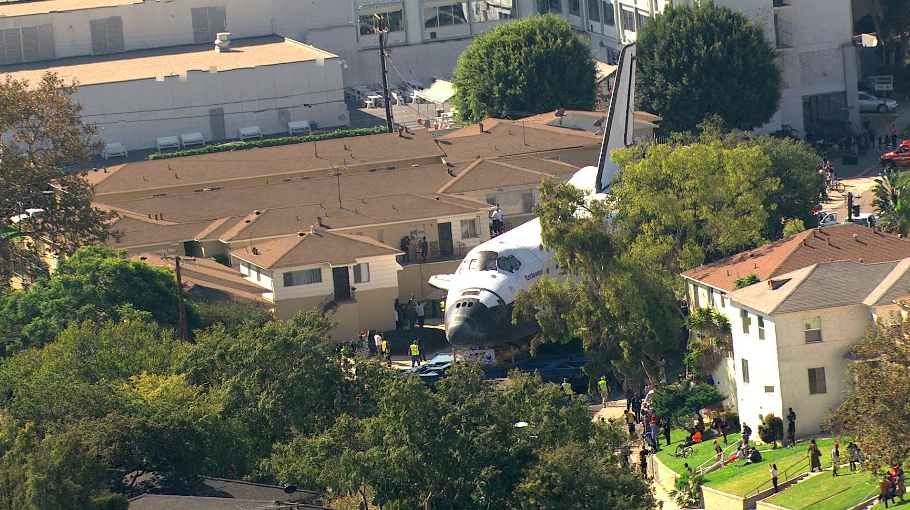 The Endeavour on Crenshaw Drive. 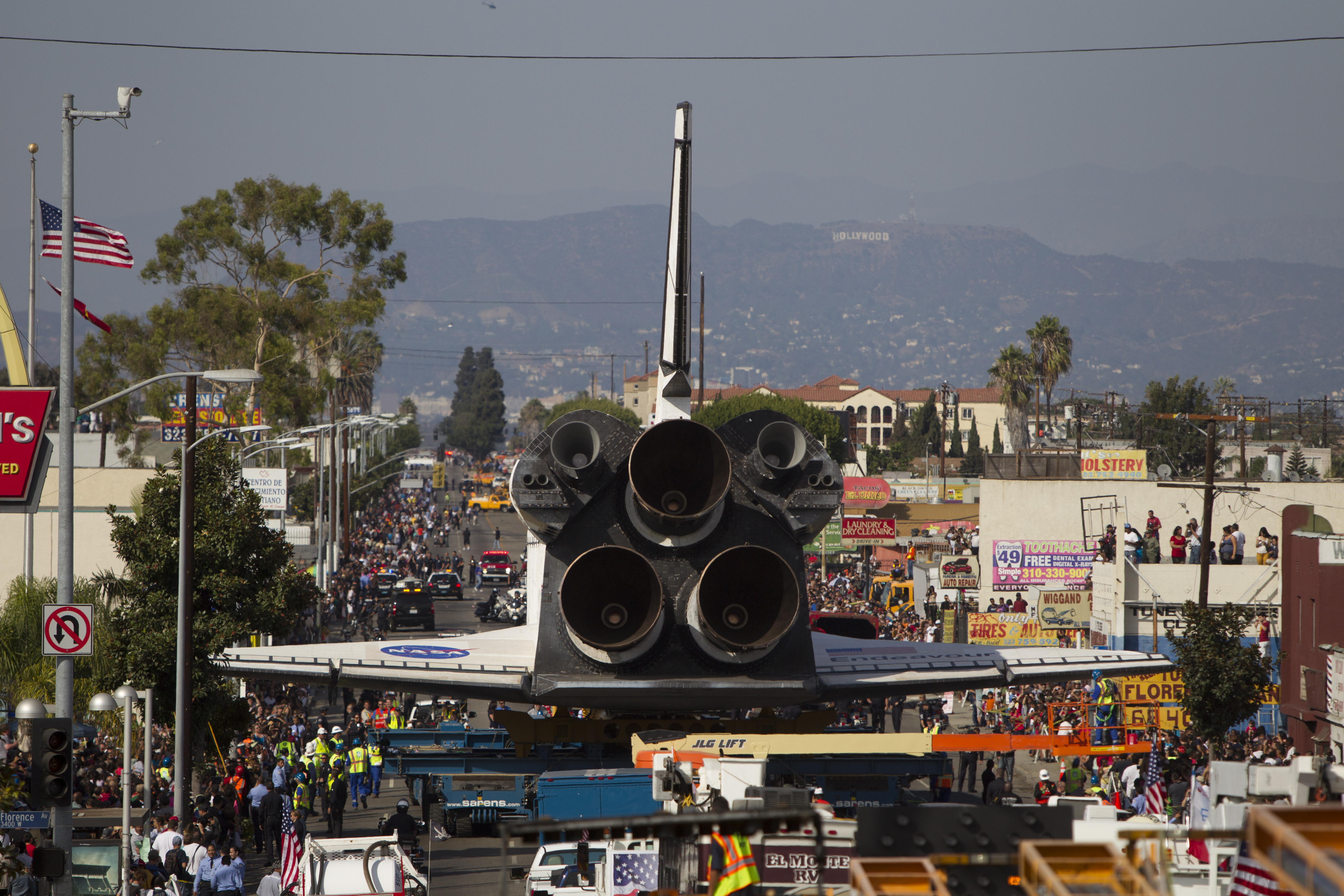 Endeavour moves from LAX to the California Science Museum, down the streets of Los Angeles.

They all cooperated with our team and helped us get this priceless spacecraft to its new home and they waited and waited and waited despite delays associated with the move. As we promised Mark Kelly, Commander of Endeavour’s final flight (STS-134) – we didn’t scratch it!

Endeavour moving into the Samuel Oschin Pavilion at the California Science Center.

And we’re very grateful to the citizens of Inglewood and Los Angeles for their cooperation, support and help.

About a year before Endeavour’s arrival we started the exhibit development process to open the California Story exhibit and the Samuel Oschin Space Shuttle Endeavour Display Pavilion. We had to move fast because our published date for opening of October 30, 2012 was fast approaching and we were fully occupied with preparing for Endeavour’s move and with securing all of the ground support equipment needed to safely reposition the Orbiter a few years down the road (changing the display from from horizontal to launch position), and with the development of the Samuel Oschin Air and Space Center. In all, we were juggling four major efforts all at the same time.

To create our initial display we decided to tell the story of the Space Shuttle program in two parts. The California Story tells the story of California’s participation in the Space Shuttle program beginning with the loss of the Space Shuttle Challenger, for which Endeavour is a replacement. Pulling the tires off Endeavour, displaying the Waste Collection System (WCS or Potty) and the Galley enabled guests to get up close and personal to some of the most important objects associated with the vehicle. The donation of the historic Rocketdyne Operational Support Center that served as mission control during the 8.5-minute trip from the launch pad to orbit gave us a chance to illuminate that display and show Endeavour’s final flight from the perspective of the flight controllers. 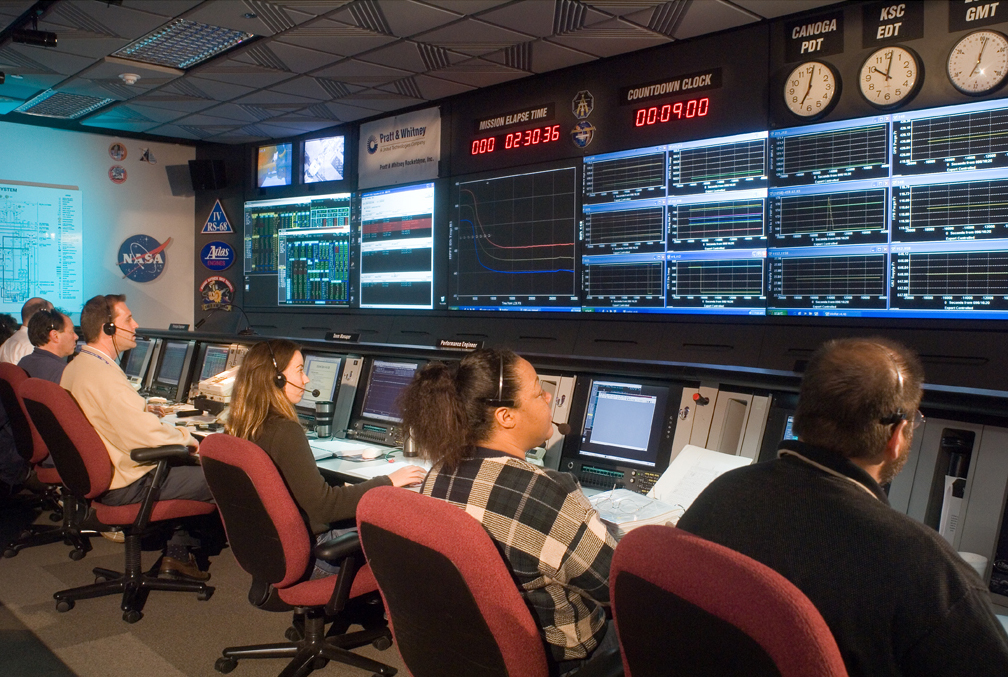 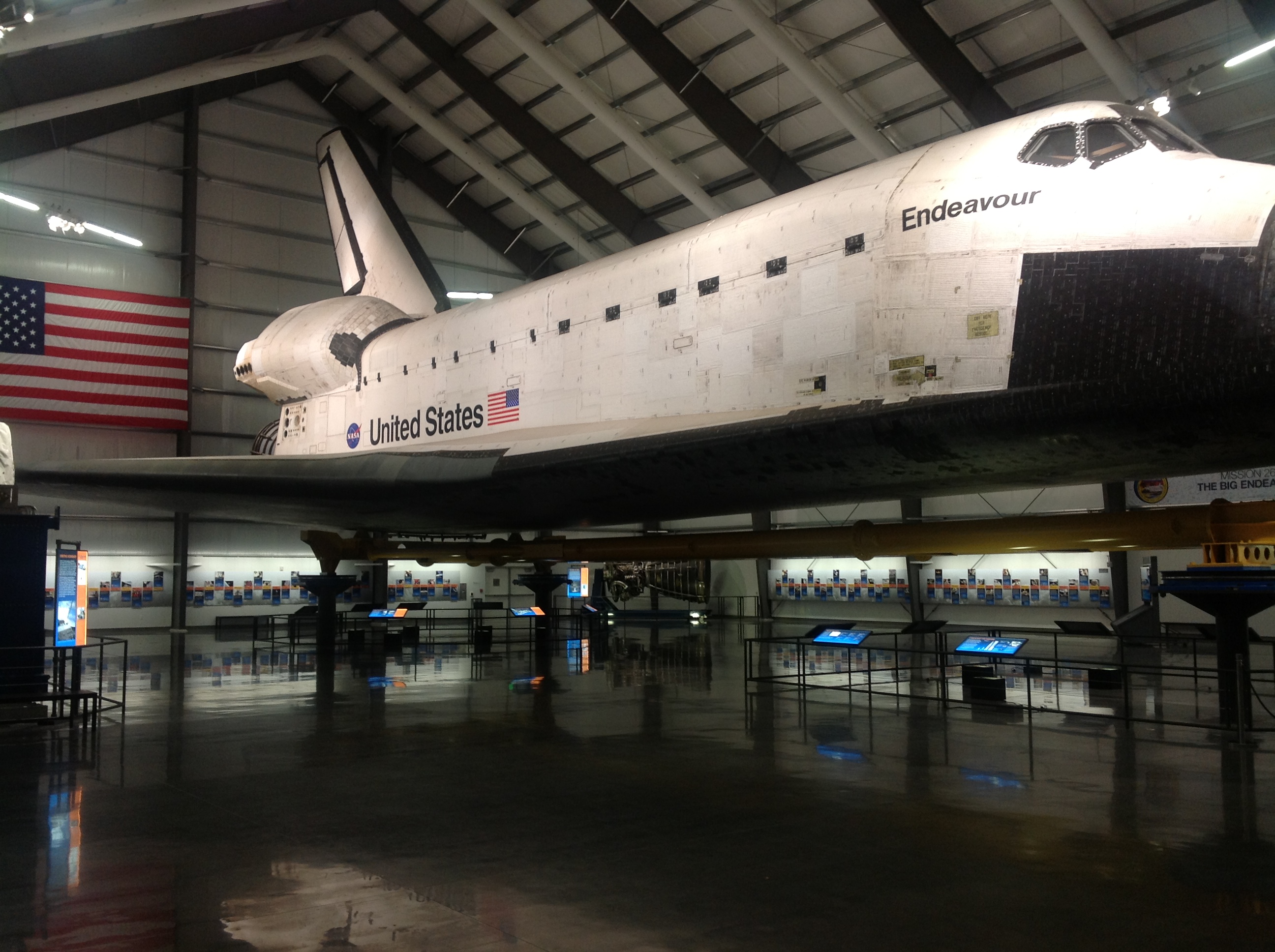 Along with the spacecraft is a flown pressurized payload bay module called Spacehab, a gift of Astrotech, Inc., 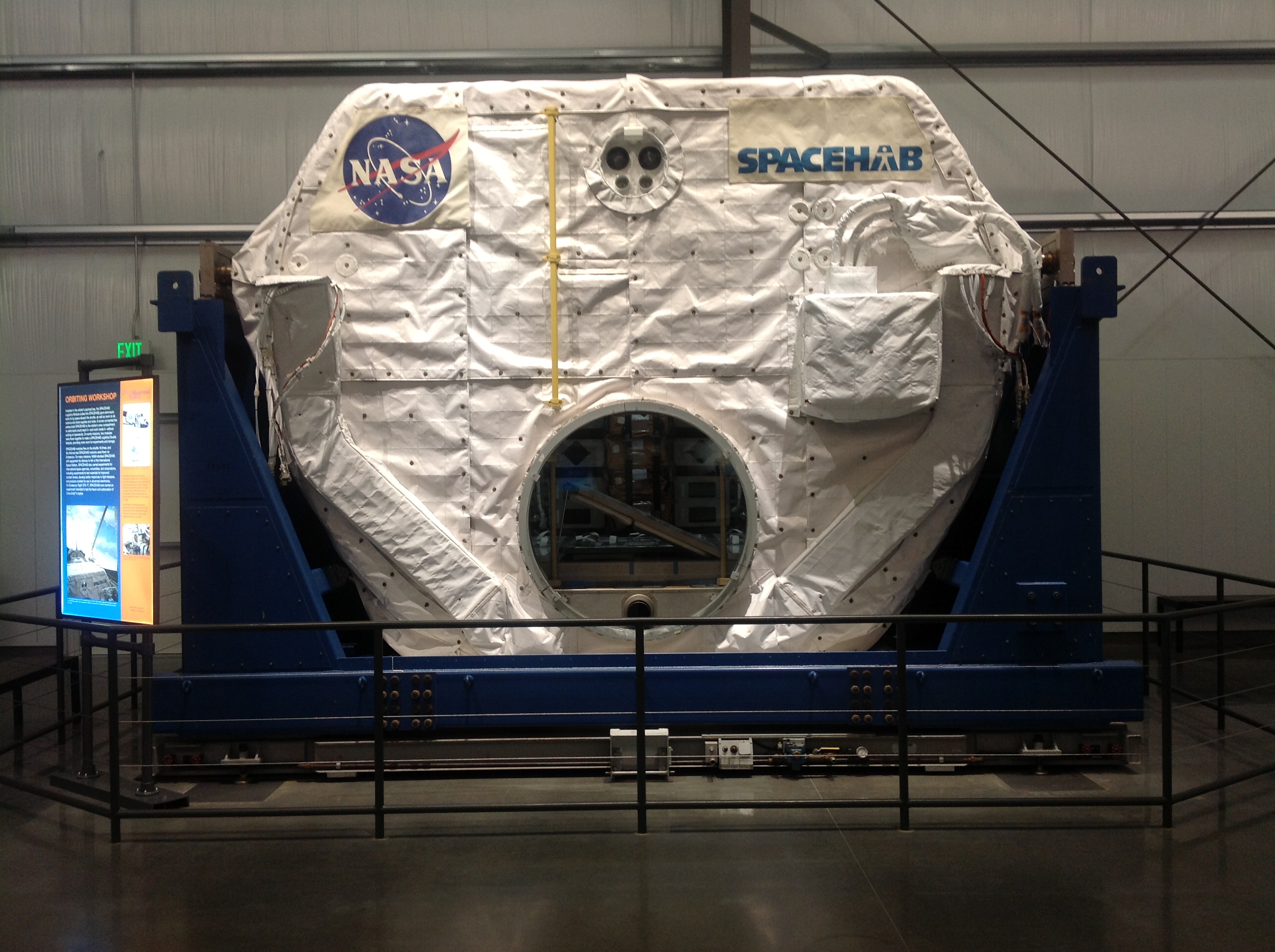 and a real Space Shuttle Main Engine on loan to us from NASA. 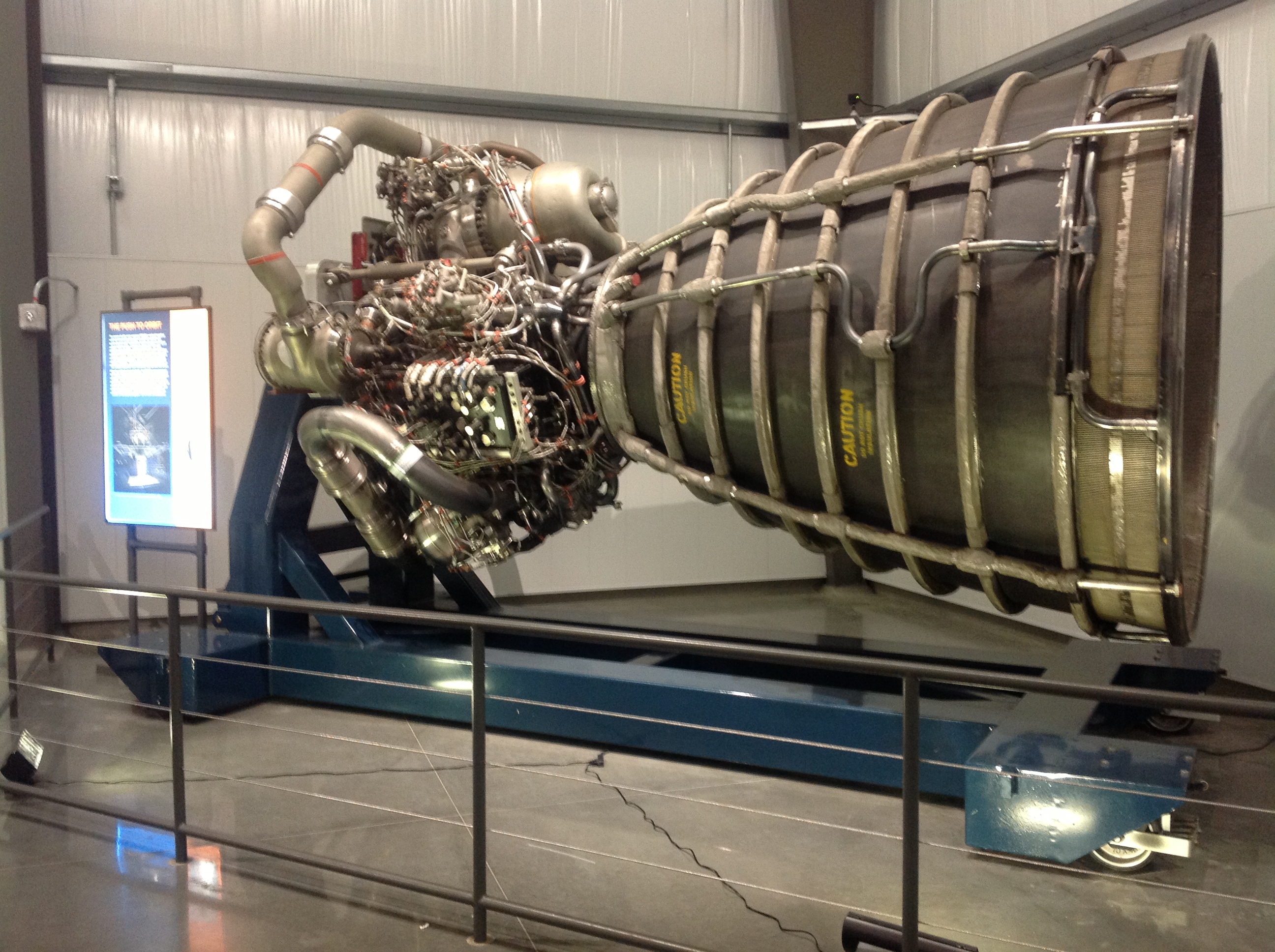 Those of us who worked around the vehicle over the past two-year period have gotten somewhat used to its size and complexity, and we underestimated the impact that the first sight of Endeavour might have on those who haven’t had that opportunity. When entering the pavilion the usual reaction is one of stunned disbelief. Endeavour is big! Measuring 122-feet from front to back, 78 feet from wing tip to wing tip and almost 60 feet to the ceiling at the tail, Endeavour is a highly complex, 145,000 pound machine that successfully managed to survive the hazards of getting into space and returning safely to the ground 25 times and flying nearly 123-million miles in the process.

With Endeavour now on display, and over a million visitors have had the chance to experience the vehicle up close and personal. The next step is the preparation of the Samuel Oschin Air and Space Center that will house Endeavour in launch configuration along with the Science Center’s collection of aircraft, pre-shuttle command modules and deep space probes. The task is both exciting and daunting and all of us who are a part of the project (staff, sponsors and volunteers) are determined to provide the most exciting and memorable display imaginable. We believe that the kids who will become inspired by what they see and touch can become transformed by the kind of experience that we hope to provide. Exposing them to an actual Space Shuttle on its launch pad will certainly be inspiring, but convincing them that they can meaningfully participate in such a noble effort is our real challenge. We’ve got a little less than five years to fine-tune our approach, fabricate all of the exhibit experiences and create a living environment that helps to build their confidence in a future that could involve leading edge science and technology. The need is real. The challenge is great. We’re honored that NASA selected California as the home for Endeavour and, particularly, the California Science Center for its care and display and we intend to succeed in our mission! 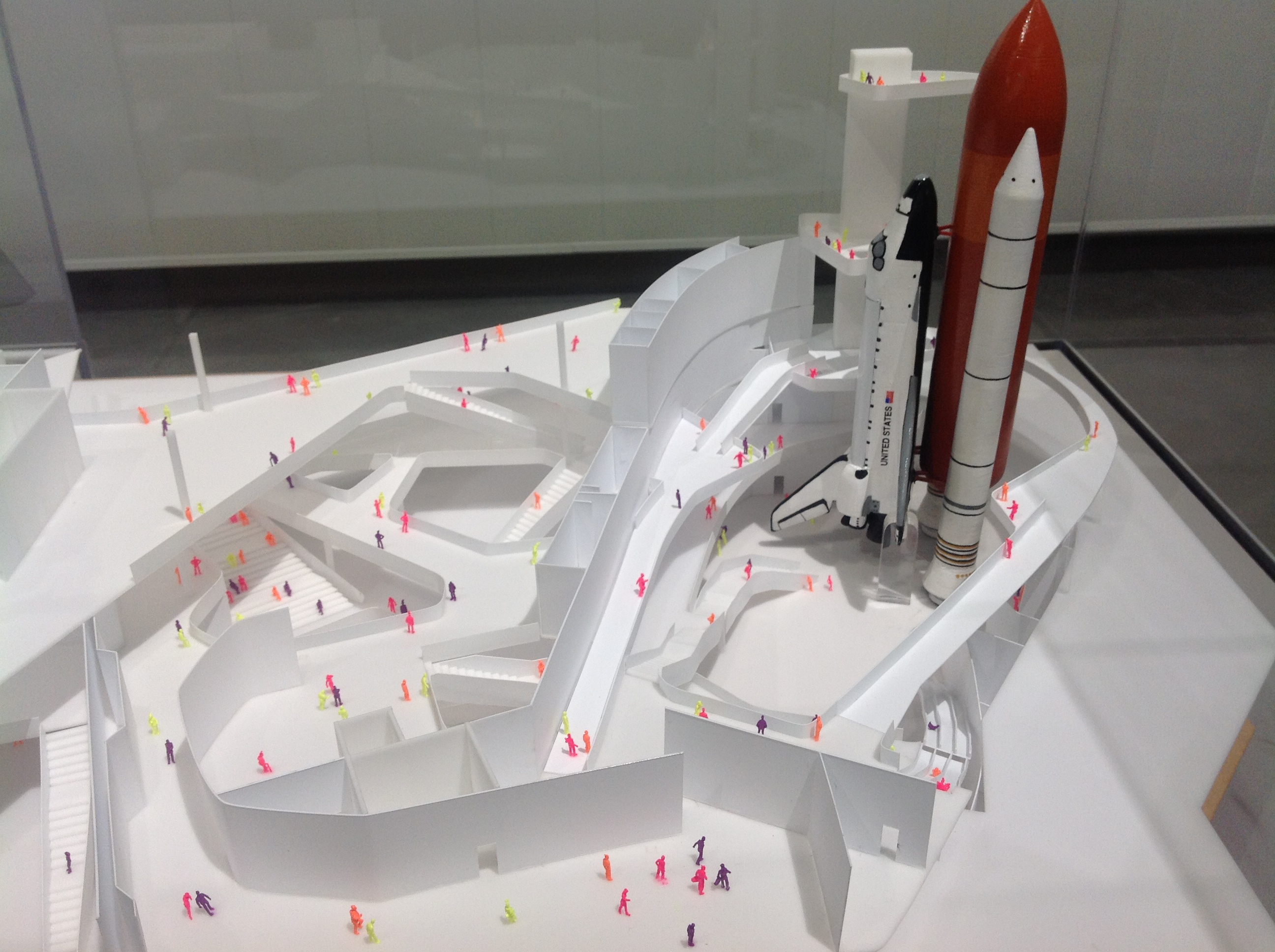 A model of the Samuel Oschin Air and Space Center.

Kenneth E. Phillips, PhD has served as Curator for Aerospace Science since 1990 and develops the California Science Center Foundation's programs and exhibits on aeronautics and space exploration. Dr. Phillips' major projects include Phase III of the Science Center's 25-year Master Plan featuring the Space Shuttle Endeavour and the Samuel Oschin Air and Space Center, and the SKETCH Foundation Air and Space Gallery among other exhibits.