I’ve been watching the phenomenon of spontaneous memorial building for decades. Ever since visiting the Vietnam Veterans Memorial in Washington, DC, I’ve been intrigued by local shrines for single accident victims to city block-long fences of posters, flowers, candles, religious tokens, keepsakes and more that follow larger-scale tragedies. I am intrigued by spontaneous memorials because they are, at first glance, everything museum exhibitions are not. There’s no planning phase or curatorial control, no designers to consult or interactives to develop, no funds to raise or evaluations to conduct. And yet, these community-based expositions have greater impact on their visitors than any formal exhibition I’ve ever seen.

Most often the result of a tragic event or natural disaster, spontaneous memorials are created as a tangible way to honor the deceased and to mark that pivotal point of change in a community’s collective consciousness and history. They are grassroots led, erupting as quickly as word spreads of the tragedy. Anyone can contribute whatever they’d like, and object selection reflects the emotions of the contributor. The photographs, drawings, poetry and even music are typically “outsider” artworks made by those who have little to no formal training but who have a deep-seated need for a cathartic release of their grief, anger, or confusion. Spontaneous memorials are constructed to help the wounded heal in a supportive, communal atmosphere.

Conversely, memorials and museum exhibits share the intent of didactic messages: to teach new lessons. Those who build and maintain memorials do so with a fervor that drives real change within their communities. Their advocacy, whether to “never forget” the event or highlight that ordinary people died tragically and senselessly, has the ability to transform the humble shrine into entirely new memorial museums at the community’s urging. According to best practices, museum exhibits should incorporate community stakeholders’ insider knowledge and expertise to provide a greater peer-to-peer learning experience.

Most interestingly, both memorials and museums are places where locals and visitors alike can gather, share information, learn and even console each other. Many museums have begun to reach out and receiving very positive responses.

On December 14, 2012, a deranged young man with multiple automatic weapons in-hand took the lives of twenty innocent children and six educators at Sandy Hook Elementary School in Newtown, Connecticut. The killings, just days before the holiday season, devastated this small community. In droves, people from all across the country donated resources to aid the recovery effort and built several memorials scattered across town. At one point, memorials included thousands of plush toy animals, Christmas trees and one wooden angel for each of the victims.

Months prior, The New England Carousel Museum, dedicated to acquiring and preserving operating carousels and located in Bristol, Connecticut, had been soliciting visitors’ suggestions to name one of their Stein & Goldstein horses slated for restoration. The wooden horse, having been sanded and painted in primer white, was on display among other carousel figures in various phases of restoration. Despite many suitable suggestions, “none of them really clicked until we thought of ‘Sandy’,” explained Executive Director Louise L. DeMars during our recent phone call. 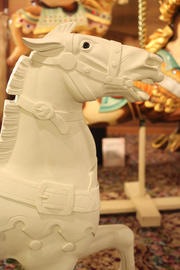 The Carousel Museum’s mission has nothing to do with memorialization or disaster relief. However, Louise confirmed that visitors are thrilled to see that the horse has been named to honor the victims and that they take a moment to stand in silent repose as suggested on the object’s label. The naming also honors those affected by Superstorm Sandy that ravaged the East Coast months prior. Some visitors ask about the stark white color of this horse, which provides docents with an opportunity to describe the restoration process. When we spoke by phone, I asked Louise whether there were plans to keep the horse unpainted or restore it to full splendor. She noted those were two options but that the Sandy Hook school colors were also being considered.

A carousel museum is surely a place constantly flooded with children and families. I asked Louise if the naming was as much a chance to help the museum staff heal. She agreed, noting that once the name was chosen making it official felt like a call to action. When I told Louise the title of this article, she exclaimed, “That’s just what carousels are! They provide a place where families can come for good old-fashioned fun, find respite and a place of peace.”

The title of this article is borrowed from Malcolm Rogers, the Ann and Graham Gund Director of the Museum of Fine Arts, Boston (MFA). In April, two brothers planted bombs near the finish line of the annual Boston Marathon, eventually killing four people and injuring 264 others. While the city was on lockdown during the investigation and ensuing manhunt, Bostonians, runners, and tourists from around the globe visiting for the marathon made their way to the memorials forming at Copley Square. They left running shoes, mementoes signaling their affinity to Boston sports teams, and “Boston Strong” banners. The mayor quickly charged the city’s archives with the task of collecting and documenting the contents. 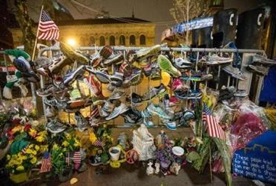 Visiting a museum became a welcome reprieve for many. The day after the Marathon bombings, the MFA waived its $25 ticket price. In a Boston.com interview Rogers explained, “Our entire community was affected by yesterday’s tragedy. We hope by opening the museum’s doors and offering free admission we will be a place of comfort, refuge and peace.” Other museums and arts organizations agreed, including the Institute for Contemporary Art and the Isabella Stewart Gardner Museum. Runners, residents and children on school field trips mingled in the galleries. “I thought it was a good thing to do today, to spend a calm day…and just remove yourself from the news,” noted one marathoner who had traveled from Mexico and finished the race just prior to the explosions.

Museums were joined by the Boston Conservatory Theater which announced that all performances of its upcoming production, “Reflections: Love, Loss and Living,” would be free of charge. The coincidental, aptly named and timely production was actually inspired by Alzheimer’s caregiver experiences. Described on the Theater’s website as an exploration of “the universal human experience of loss and grief, and how we overcome these experiences with resilience, hope and the strength of community,” the production resonated with theatergoers.

For the Boston Globe, Rogers described the spirit of humanity and a primary reason why arts organizations exist. ”You’ve just seen a horrible example of what a perverted human mind can do. What the works of art in our care show is what the human mind and the human hands can do at their greatest and their most inspired.” And this is the essence of why spontaneous memorials are so effective: they inspire us to do more than just keep going in the face of the worst kinds of tragedy—but to be the imaginative, creative, hopeful beings that we are.

Something else museums do really well is provide educator resources. Of the most gracious and timely regarding recent disasters are the resources offered by the Oklahoma City National Memorial & Museum (OCNMM). Having been built on the site of the former federal Murrah Building after it was destroyed in April 1995 by a domestic bomber, the OCNMM has a most unique mission statement:

We come here to remember those who were killed, those who survived and those changed forever. May all who leave here know the impact of violence. May this memorial offer comfort, strength, peace, hope and serenity.

Just one month ago, tornadoes literally leveled the town of Moore, Oklahoma, killing seven schoolchildren and leaving thousands of people homeless. Within hours, KOFR television delivered the resource guide compiled by OCNMM on how to talk to children about disasters. Over the past several years, the Museum created A Network of Hope-A Resource to Help, an online downloadable resource guide to assist communities, at all levels, in the wake of catastrophe. Additionally, the Oklahoma Territorial Museum (Guthrie) and the Science Museum Oklahoma became collection sites for disaster relief supplies and offered free admission, while the Sam Noble Museum posted updates to its Facebook account on how to help those in need.

Each of these events has stirred public confusion, mourning, and even outrage. And each has been a call to action for local museums to help the public cope and heal. From the simple measures of naming an artifact or extending the welcoming hand of hospitality by offering free admission to the more complex and time-consuming task of developing a resource guide, these museums have answered the call in ways that suit those museums best.

As the ritual of memorial-building becomes an almost expected exercise, more arts organizations are proactively reaching out to help their communities heal. Mission-driven or not, some museums collect artifacts while others develop programs or simply extend gestures of hospitality and kindness. It seems this new ritual of spontaneous memorialization is changing the way museums and arts organizations respond to communities in times of real need.

Karen Kroslowitz is a self-proclaimed museum nerd, the result of her frequent attendance as a child in museum education programs. She is a graduate of John F. Kennedy University’s Museum Studies program, where her thesis on spontaneous memorials received the Gail Anderson Award for Museums and Social Responsibility. For more on this topic, you can read her article “Spontaneous Memorials: Forums for Dialog and Discourse” in Museums & Social Issues (2:2, 2007). Karen is the Senior Registrar & Collections Manager at the Computer History Museum in Mountain View, CA.

About 150 museums are participating in "Celebrate America's Freedoms: A Day of Remembrance," a project designed to unite communities. Many museums are holding concerts, readings and vigils. Most are offering free admission Wednesday and staying open late, hoping their galleries might serve as a quiet space for reflection.