Drive On! !, the theme of the Western Museums Association (WMA) 2013 Annual Meeting, implies urgency and risk-taking. It suggests alignment with the present and future. It describes that moment just after a considered pause when we focus ahead and enter the difficult terrain before us, having faith there is a better place on the other side. Pull the straps tight, lean forward, and encourage others to join. Museums haven’t in general been in this line of work. Our traditional role has been to stay above the fray and enter the picture after all the dust has settled.  Our disposition has been that of a detached observer rather than active agent. To be sure, there have been moments when cultural organizations have shown vigor and verve. I recall my formative years in the heady late-1980s during the AIDS crisis, the Culture Wars, and the political climate of fear that the Jesse Helmses of the world stoked. The stakes were enormous, and museum, galleries, artist spaces, and contemporary art centers were up to the task. We organized, advocated, and had some victories. Regretfully, overall, I think, we lost. The National Endowment for the Arts was stripped of its funding and a chill went through the air. Controversy became a thing to avoid. We censored ourselves into an illusionary safety. We covered our eyes, closed our mouths, and stood still. We now find that the world has changed profoundly and moved on without us. People have taken advantage of the many new ways to engage and share culture, and made cultural sites and networks of their own, elsewhere. The liability we made for ourselves was irrelevance to our communities. We are now playing catch up. “How to Successfully Address Controversial Issues and Engage your Community” is a moment to reflect upon the concerns above, and will be presented at WMA2013 on Thursday at 1:30pm. Having just spoken with the wonderful panel organizer, Courtney Gilbert of the Sun Valley Center for the Arts, and expert co-panelists, Sun Valley’s Co-Executive Director and Artistic Director Kristine Poole, and Rock Hushka from the Tacoma Art Museum, I’m more excited with the prospect of having this meaningful conversation. The range of projects will be broad, covering a spectrum of topics and approaches. The discussion will also focus on practical steps, ways of energizing museums by authentically and effectively engaging stakeholders and audiences across content platforms such as galleries, public spaces, social media, and participatory public programs. Our panel will be a lively “how-to” guide and won’t skirt the issue of internal impediments that we, as a field, face. We will be candid about difficulties at the same time inspire others by showing the rewards that accompany meeting these challenges head on. 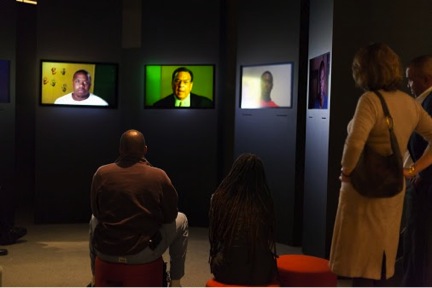 As a case study, I’ll offer Question Bridge: Black Male Identity, a project I did with Chris Johnson, Hank Willis Thomas, Bayeté Ross Smith, and their amazing team. While, initially, exploring black male identity well (with respect and honesty) with a fresh perspective may seem daunting, I was fortunate enough to have critical pieces in place: the artists were brilliant, the topic was timely and mattered, and everyone—from the artists to Museum staff and the public—honored the indispensible contributions of participant and audience. The image above of a public enraptured by Question Bridge, I hope, conveys what the Oakland Museum of California and our community gained for the effort. I look forward to sharing this and other stories at Drive On!. To attend this session at the 2013 Annual Meeting, please visit: http://www.regonline.com/WMA2013 René de Guzman is Senior Curator of Art at the Oakland Museum of California (OMCA). In 2007, he joined OMCA to complete the reinstallation of the Gallery of California Art. Previously, de Guzman was a founding member of Yerba Buena Center for the Arts, a multi-disciplinary contemporary art center in San Francisco where he served as Director of Visual Arts.