The Gulf of Alaska is a storm graveyard, a place where low-pressure systems stall against high coastal mountains saturating the landscape with rain and wind. In the Kodiak Archipelago, gales roll metal dumpster, gild sophisticated boats with a disabling coat of ice, and drench even those clad in the thickest rubber rain gear. Here, drowning and hypothermia are always lurking nearby. It takes much more than fortitude to live in this environment. It takes technology.

Kodiak’s Alutiiq people mastered the art of Alaskan coastal living. With houses insulated with earth, flexible skin covered boats, ingenious tools for ocean harvesting, and warm, waterproof clothing, the Alutiiq thrived in one of the world’s stormiest regions for over 7,000 years. Clothing was perhaps their most critical tool. Long, robe-like parkas of animal and bird skins provided warmth and a canvas for spiritual connection with a volatile natural world. Jackets stitched from the translucent intestines of sea mammals and bears provided lightweight, flexible protection from the rain. This clothing impressed the merciless Russian traders that colonized Alaska. Commanders commissioned Native seamstresses to produce Russian-style garments, capes and captain hats, with waterproof stitching techniques and materials.

Yet by the early nineteenth century, the skin sewing arts disappeared around Kodiak, the victim of misunderstanding and acculturation. Western wool and cotton clothing took the place of garments whose cut, construction, and elaborate embellishments had been informed by millennia of Alaskan coastal living. Ladies continued to sew, but in new mediums and under new cultural norms. When the Alutiiq Museum, Kodiak’s tribal cultural center, opened its doors in 1995, there were very few Alutiiq people with skin sewing experience. None of them were traditionally trained. Sewing was once an essential skill, practiced daily by groups of related women. Alutiiq girls learned garment construction and stitching techniques by working beside mothers, aunts, and grandmothers. But as the twenty-first century approached, the training networks were gone. There were no skin sewers left to teach a new generation of practitioners.

For the newly established Alutiiq Museum, exploring Alutiiq arts proved a popular way to engage communities in understanding and respecting Native heritage. Hands on carving, basket weaving, and sewing activities were fun. Students of all heritages enjoyed the creativity, learned of traditions, and gained inspiration from the sophistication of Alutiiq technologies. Moreover, hands-on instruction was comfortable and familiar to Alutiiq people. It was a Native-style educational model. But, the museum’s programs were teaching about Alutiiq arts, not revitalizing fragile traditions. To create a thriving cultural community, we needed to do more than simply share the arts. We needed to fuel artistic practice.

The first challenge in this effort was creating a cadre of arts instructors, experts who could learn and pass cultural knowledge to others. Sven Haakanson, Jr., the museum’s Executive Director at the time, recognized that while contemporary artists could not apprentice master beaders or boat builders, they could study the works of ancestral craftsmen. Museums across Europe held Alutiiq ethnographic collection that could serve as both inspiration and a technical instruction manual. By looking carefully at nineteenth century works, modern craftsmen could record details of design, construction, use of materials, and decoration to refine their knowledge of authentic techniques. He began by taking artists to the Château-Musée, Boulogne-Sur-Mer, France to study a collection of Alutiiq ceremonial masks (Haakanson and Steffian 2009), and then visited the Peter the Great Museum of Anthropology and Ethnology in St. Petersburg to research basket weaving (Alutiiq Museum 2014).

Sharing knowledge was a fundamental principle behind this work. Each artist received the rare opportunity to study at a distant museum in return for teaching a week-long high school workshop (Steffian 2006) and developing an original piece for the Alutiiq Museum’s collections. These projects were transformative for the adult artists and began to impact the broader community. Youth in Kodiak schools were exposed more deeply to local arts and some began additional exploration. The Alutiiq Museum Store saw an increase in the production of quality Alutiiq artwork and the community dialog about Alutiiq arts grew. However, artists were still largely working alone. The ties for knowledge transmission were just beginning to form. Moreover, it was hard to involve a broader audience in a program that took place in foreign museums, artists’ studios, and school classrooms. Alutiiq Museum staff members considered these issues as we planned a study of skin sewing. How could we increase engagement in Native arts programming and grow a cohort of artists? Susan Malutin, Kodiak’s foremost Alutiiq skin sewer, suggested a collaborative approach, one that mirrored Alutiiq traditions of working together.

Between 1825 and 1840, Finnish seafarer Arvid Adolf Etholén, collected Native objects along the Alaska gulf coast (Varjola 990). This included sewn items from the Alutiiq world. Etholén’s collection, now housed in Helsinki, has some of the best-preserved examples of Alutiiq parkas, jackets, boots, hats, bags, and blankets. With enthusiastic support from the National Museum of Finland, the Alutiiq Museum planned a research trip to Helsinki for five skin sewers, but charted a new path for the work following the trip. Rather than asking each artist to create a unique object, we tasked the group to build a parka together. Malutin, who agreed to lead the project, suggested we expand this idea to youth training. At each of five different village schools, students would learn stitching techniques from the sewers and then fabricate a piece of the garment–a sleeve, a portion of the shoulder, or the body. Then, following the school workshops, the sewers would host a weekly sewing circle at the museum to stitch the pieces together and decorate the parka. The public would then be invited to attend.

The results were remarkable. Over two years, the team studied clothing in Finland, provided instruction to 40 students in 5 rural schools, trained two student interns, worked with many community members and organizations, and completed the first caribou skin garment made in Kodiak in over a century. The result of their efforts—initially unveiled on October 30, 2014 and added to the Museum’s gallery on December 13, 2014—is a masterpiece, a breathtakingly beautiful parka that celebrates the artistry of Alutiiq skin sewing. They built the piece from an impressive and instructive list of ingredients: caribou, sea otter, river otter, and ermine skins, caribou rawhide, caribou hair, gutskin, red wool cloth, embroidery floss, goat hair, replica puffin beaks artificial sinew, acrylic paint, and dye. The list shows the wealth of raw materials Alutiiq seamstresses once kept in their sewing bags. It also demonstrates the variety of manufacturing techniques they employed–cutting, coloring, stitching, and wrapping; techniques that the modern sewers worked to perfect. 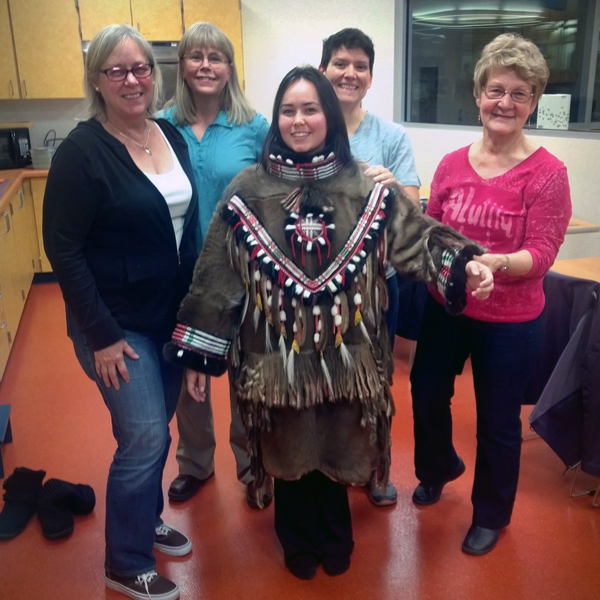 At the heart of this project was the team of sewers. Susan Malutin, Cathy Cordry, Mary Halvorsen, Hanna Sholl, and Theresa Schneider developed a strong bond during their trip across the world, their emotional study of ancestral clothing, and their experiences instructing youth in Alutiiq villages. Together they not only completed the parka, but formed those important ties needed to mentor each other and members of the community. 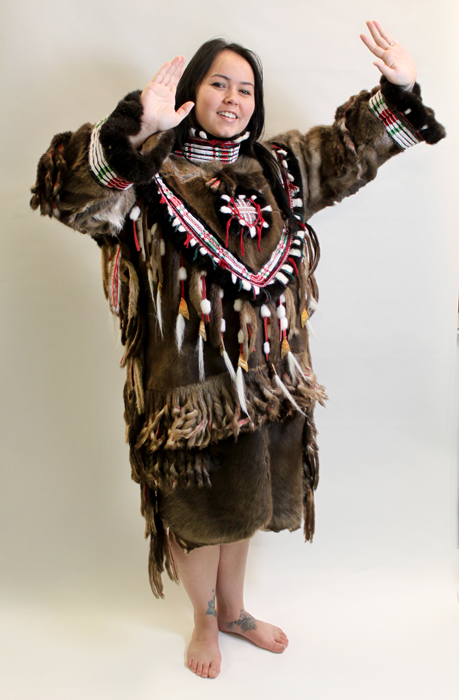 The skin sewing project became one the Museum’s most impactful efforts to date, not only in the number and variety of people who participated, or the excellent media coverage, but in those less measurable outcomes. There is a renewed pride in ancestry, a fresh vigor for skin sewing, and a strong bond of friendship that will support sewing exploration for years. Today, the skin sewers are holding their own sewing circle, working on personal projects and involving mothers and friends in the group. There is talk about a gut-sewing project, and an effort to teach the decorative techniques used to embellish the parka.

For the Alutiiq Museum, the project highlighted some important next steps. In February 2015 we are hosting a workshop for artists to learn about instruction. Not every artist is comfortable teaching. A room filled with active students can be intimidating, even without needles and carving knives! By sharing best practices in cultural arts education, working with artists to develop example lesson plans, and making sure that everyone understands the complicated laws that govern the use of Alaska’s natural materials, we are building a stronger group of mentors—a foundation for arts education.

Collaborative kayak building is also on the horizon. Like garment construction, crafting an Alutiiq boat is a large undertaking, one that requires many hands and many skills. Plans are underway with Harvard University’s Peabody Museum to bring an historic kayak to Kodiak for display. Collected in 1840, this craft is perhaps the oldest, complete Alutiiq kayak in the world. It will be displayed in our gallery for ten years, in an exhibit that tells the remarkable story of Alutiiq maritime traditions in Kodiak’s tempestuous waters. During its stay, craftsmen will work with Alfred Naumoff, the last traditionally trained Kodiak Alutiiq kayak builder. Together, Naumoff and the students will be able to gaze inside the kayak to study the shape of its parts and the ways they are joined, as they work together to recapture cultural knowledge.

Watch the short project film at this link:

Amy Steffian is an archaeologist, a writer, and an arts buff with a masters degree from the University of Michigan. Amy serves as the Director of Research and Publication at the Alutiiq Museum and Archaeological Repository in Kodiak, Alaska. She has worked for the organization since its inception, helping to design, fund, and implement programs that revitalize Alutiiq traditions.

I appreciate your effort. I have a good experience of Alutiiq Museum because I have been there couple of the times in my whole life and always spent remarable time with my friends and family members. It is a best place for having fun and tourists can enjoy some time with buddies.