Earlier this year, our team at the Autry National Center of the American West in Los Angeles launched an online crowdfunding campaign for our exhibition about Route 66. In 60 days, we raised more than $60,000 for the exhibition, including more than $40,000 through the Indiegogo platform and $20,000 in offline donations.

We were pleased with the results of the campaign, but we also learned a lot about the process and the amount of effort required. It’s similar to a Route 66 journey: there are highs and lows, landmarks and long stretches of nothing—and every trip is different. That said, we’re happy to share our experiences with the Western Museums Association community, and we’ve structured our advice in the form of questions to ask your team before embarking on a journey like ours. 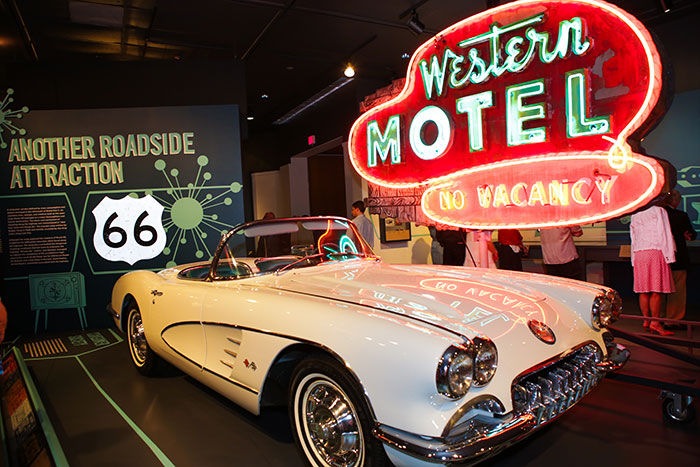 Inside the finished Route 66 exhibition

1. What are your goals? We launched our online crowdfunding campaign to raise additional funds for the exhibition and related programs and to generate buzz about the exhibition before the public opening. We felt the Route 66 theme was a perfect opportunity as the Mother Road has fans worldwide.

2. Are you prepared to collaborate? If you also have a two-fold goal to raise awareness and funds, your Marketing and Development departments will need to work very closely on the campaign’s messaging and execution. We divided the work fairly evenly between the departments. Marketing oversaw video production, set up the campaign, sent mass e-mails, managed press relations, and posted social media updates. Development approached individual donors, processed donor information, and fulfilled perks.

3. Are you ready to work hard? Because of the success of campaigns for projects such as the Veronica Mars movie, the Reading Rainbow app, and yes, the $50,000 potato salad, some people seem to think that you can just set up a crowdfunding campaign site, offer a few perks, and money will appear. It’s rarely that easy. According to Kickstarter, fewer than half of its projects (44%) are fully funded by their deadline. Whether you are trying to raise $10,000 or $100,000, to be successful, you have to hustle just like you would with any other fundraising effort.

Like most campaigners, we also underestimated the time it took to fulfill perks. Collecting T-shirt sizes, responding to questions from donors, compiling RSVPs for events—the time is significant, and it’s important to identify a staff member who can dedicate the hours needed to make sure the campaign is a positive experience for everyone involved.

4. How can you start this thing with a bang? As Indiegogo has noted, campaigns with momentum are far more likely to reach and exceed their goals. Prior to launching our Route 66 campaign, we discussed it with our board of trustees and presented it at an all-staff meeting. The morning of the campaign’s launch, we sent e-mails to our database (about 20,000 subscribers); sent press releases and pitches to individual reporters; posted about it to social media; and messaged various companies and associations related to Route 66. We received a lot of media attention that week. The catchy target amount of $66,000 for a Route 66 exhibition seemed to help, as did the fact that few other museums in Los Angeles have launched major crowdfunding campaigns. 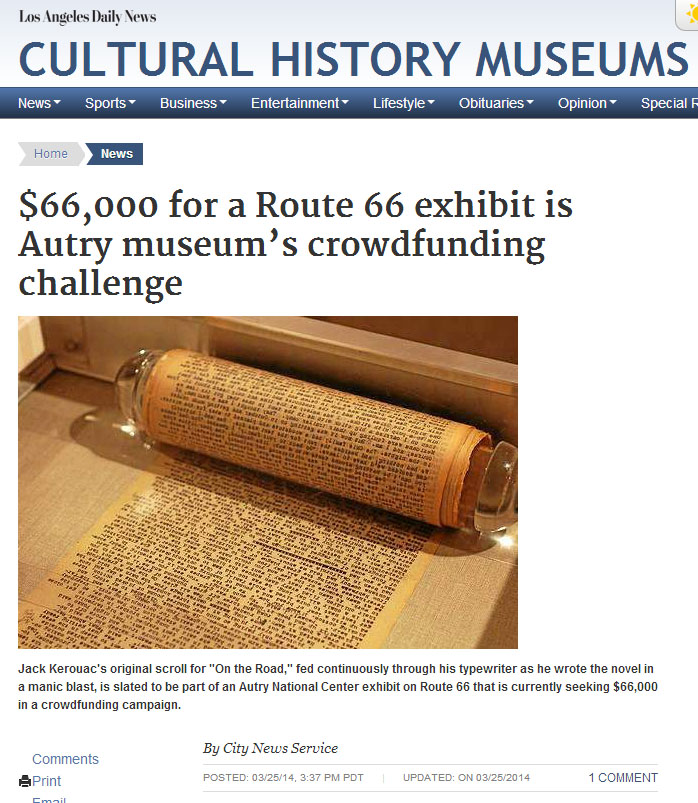 Screenshot of a newspaper article about the campaign

5. Which platform is right for you? A lot of people ask us why we decided to use Indiegogo instead of Kickstarter or other platforms. With Kickstarter, you must raise the full goal amount in order to receive the money. We weren’t comfortable taking that risk.

6. How will you maintain the momentum? Even if you raise a quarter of the funds in your first week, you’ll still have a long way to go. What tactics will you deploy to continue to collect donations—send periodic e-mails, add new perks, add on-site signage, post funny videos? It’s also important to identify existing donors who may be able to contribute mid-campaign to give it an additional boost.

Indiegogo reports that 22% of funds are raised as a result of traffic from social media posts, that people give 20% more money when clicking through e-mails than from any other source, and that 239% more money is raised by groups who provide updates at least three times during the campaign. 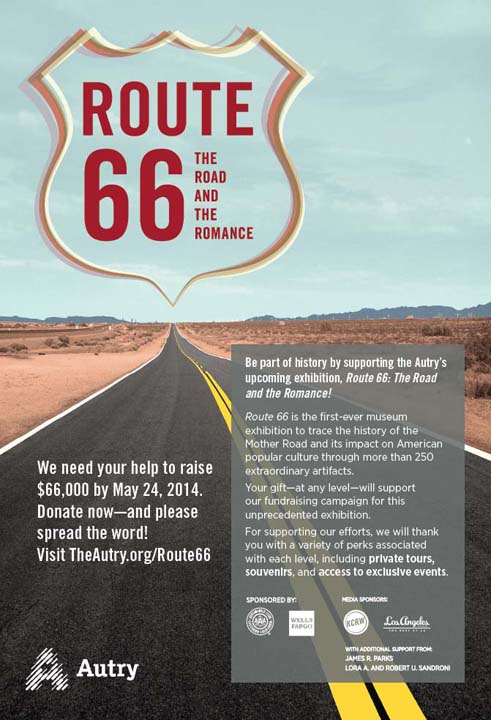 Design of table tents we placed in our museum cafe

7. Do you have a plan for accepting offline donations? Even though Indiegogo and Kickstarter make it easy for people to give online, many of our donors said they would prefer to send checks. If we had required gifts to be made online, we might have lost about $20,000. Instead, we accepted the offline donations and simply noted on our campaign page that we had received additional offline funds. It’s fun to see the online progress bar move closer to the target, but we needed to keep our primary goals in mind.

8. Is your organization ready to be bold and creative? There will only be one $50,000 potato salad, but who knows what’s next!

Some related news articles and resources are listed below. If you have any questions about our Route 66 campaign, feel free to give me a shout on Twitter @MarenReport.

Maren Dougherty is the Director of Communications and Marketing for the Autry National Center of the American West in Los Angeles. Prior to joining the Autry, Maren was the Director of External Affairs for the Balboa Park Online Collaborative in San Diego.