Next to me at the Asian Art Museum’s (AAM) Yoga: The Art of Transformation exhibition stood a woman holding a rather large magnifying glass that she was using to see the tiniest of details in the Indian Miniature painting before her. I thought to myself, “She’s so smart to bring a magnifier to the show!” To be honest, I was jealous; I wanted one too. Ten paces later, I saw more magnifiers on the wall, one clearly waiting just for me. Of course the museum should include these devices, as without them you really can’t see enough! I smiled, not only because I could actually see deeper into the works but also because the magnifiers’ availability demonstrated support for visitor engagement.

In terms of interpretive strategies, on some level, offering a magnifying tool in the galleries seems such a simple, obvious gesture since it significantly helps viewers enjoy the exhibition. Yet, on another level, simple, obvious interpretive help for visitors negotiating exhibitions is often non-existent. More typically, visitors are on their own to understand the point of an exhibition. I was impressed enough to return to the Museum to study just what the AAM team did with Yoga to support visitors. I also arranged to talk with Deborah Clearwaters, the Director of Education and Interpretation, to get behind-the-scenes insights into this exhibition that solidly support the visitor experience. 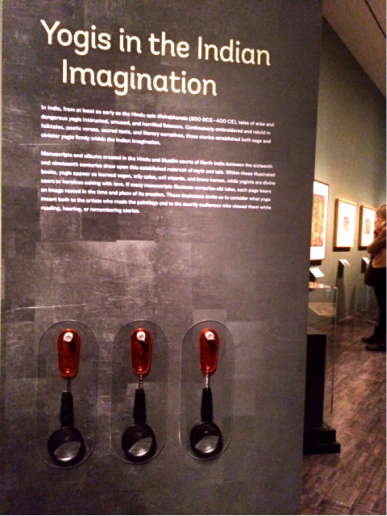 Magnifiers at the Asian Art Museum

The magnifiers were held on plastic posts covered with a suede-like material to keep them from slipping off. To get a feel yourself for the detail in these miniatures, click through to this work in the exhibition on loan from the National Gallery of Victoria. Once there you can digitally move into this after-a-tiger-hunt scene.

Deborah explained that while the Arthur M. Sackler Museum at the Smithsonian organized the exhibition, the AAM added many interpretive components to keep with their practice to support visitor understanding. When I told her my magnifier jealousy story, she said that including them in the exhibition was an old-school move. The practice of giving magnifiers in order to see Indian miniatures is one they used back when the museum was still in Golden Gate Park. 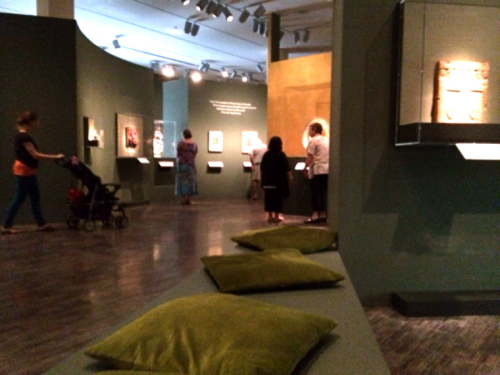 View of the Osher Gallery Seating.

Yoga offers other obvious creature comforts, like seating. One of my graduate students, who had never been to the AAM, noted that she had had one of the most delightful experiences ever in a museum as she sat on a cushion in the gallery and listened to music while looking works of art. For her, having the ability to experience a combination of physical, visual, and auditory sensations created a complete immersion experience. Being able to sit and contemplate seems essential for an exhibition that touts ideas of inward being. 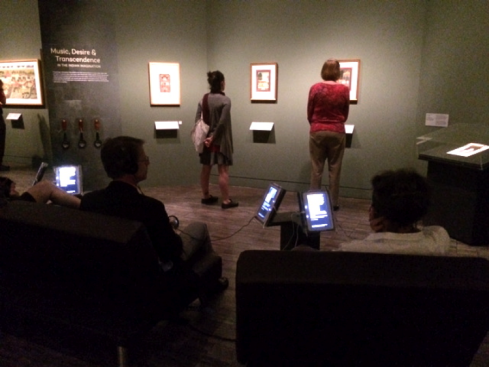 View of the listening station seating area. The wide-angle view of this makes the distance between the seats and the paintings appear much farther than it actually is in the galleries.

The AAM added several multi-media components to the show including a projected video and a 31 stop audio guide. Another addition was listening stations designed to support understanding of “musical modes” that, according to the interpretive text, aim to evoke emotions akin to those experienced by accomplished yogis. In front of comfortable chairs were four small screens on stanchions with headphones at each so the seated listener could hear the music that corresponded with the opaque watercolor paintings on the wall. The screen view duplicated the painting, described the type of music, and indicated the length of the experience. In this iteration, the screens did not cycle through each of the four musical options, and visitors had to get up and change stations if they wanted to hear all of them. Deborah noted it would have been helpful to be able to cycle through all four from one seat; since each one is two or three minutes long, there is something to be said about sitting in one place for a short period of time, then moving so someone else can also listen. Prototyping each of these versions could indicate what would create the best experience. 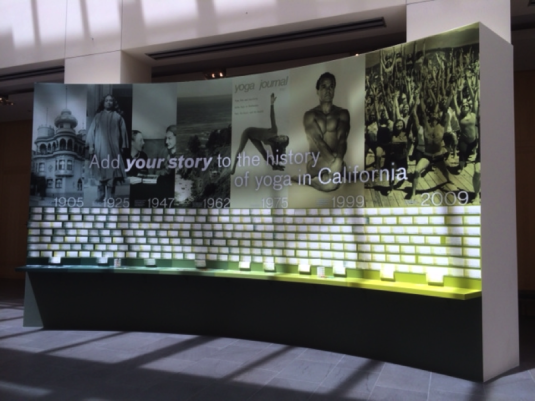 Another addition that the AAM added to the show, with the help of an advisory group, is a History of Yoga in California timeline and feedback wall that touches key points of California’s role in the adoption and popularization of yoga in the West.

Deborah mentioned that story highlights from 1905 to 2009 printed along the ledge were deliberately sparse so that people could add comments on cards color-coded with decade dates. The individual stories offered were playful, deep, and quite personal. One card flat out stated, “Yoga saved my life.” 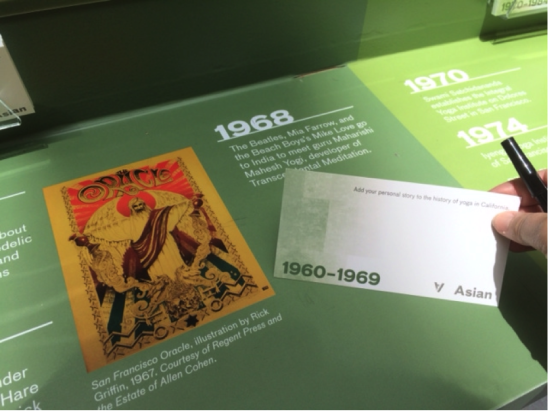 Visitors could choose which dates to place their comments for the History of Yoga in California feedback wall.

I asked Deborah how they were using the cards, or even if they were saving them beyond the show. Museums often gather visitor voices, but then what do we do with them? If we can figure out how to systematically analyze them we could better understand, our visitor perceptions and perhaps even our impact; yet, the huge time challenge needed for extended analysis is often a barrier. Deborah mentioned one immediate way they used the cards was to pull some of the more interesting ones and place them on every chair for a staff meeting—a smart way to remind those behind the scenes that the work being done impacts visitors. They have also posted some on social media. 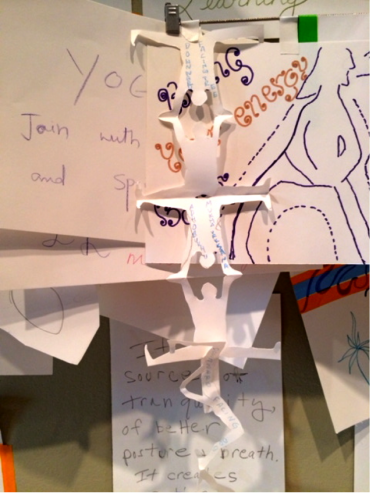 The sentence behind the paper figures reads in part: It is a source of tranquility, of better posture and breath.

AAM’s resource center is near the Yoga exhibition galleries, and staff created a station of materials and tools for students and others to make then either take or leave responses to the exhibition. While there, my eye traveled to a paper cutout string of twisted paper dolls: simple yet emblematic of the body movement seen earlier. The cutout reinforced for me how visitor voices often help other visitors relate to an exhibition.

Also in this area was the #WhitePeopleDoingYoga installation by *Pardon My Hindi/ Chiraag Bhakta (click through to see a time-lapse of the installation). After having just experienced the three prior galleries of Asian renderings of yoga poses, the vast wall of western commercial yogi-related ephemera jarred me into thinking about cultural translation and appropriation. Reading information in the paper guide for the show later on reinforced my sense of the business of yoga, a $27 billion commercial enterprise in the U.S. alone—and no surprise within this guide are ads from yoga studios.

While looking at the contemporary twisted bodies of #WhitePeopleDoingYoga, I thought about this unexpected yoga class that I’d seen just hours earlier as I approached the museum entrance. The sight on the Museum’s front landing was astonishing. Directly underneath the Museum’s grand Yoga banners, people on turquoise mats moved through classic poses of downward dog and triangle position, all being conducted right in one of San Francisco’s busiest districts. A class helper explained that the demonstration was being held as part of a promotional campaign for National Women’s Lung Health Week. Whether in partnership with the Museum or not, the connection of yoga, health, and the exhibition inspired enough practitioners to willingly move their butts right at the Museum’s front gate. 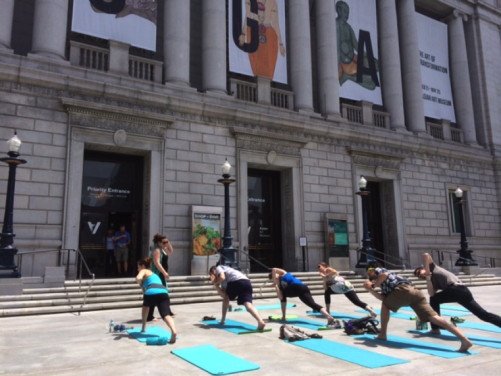 Yoga in front of the Asian Art Museum

The AAM showcased the visual side of the Yoga story through good design and smart interpretive strategies. Their careful thought helped visitors shape abstract and spiritual ideas, while at the same time tying them to our 2014 experiences of Yoga. Alas, the beauty and range of the show might be enough to even make move-reluctant me be willing to twist myself up.

Susan Spero teaches museums studies at the John F. Kennedy University. For over 20 year she has concentrated on museum ideas in Education and Interpretation, and Museums and Technology. She currently serves on the board of the Museum Education Roundtable that publishes the Journal of Museum Education.