On the edge of a tiny little town, overlooking a well-known river, in the middle of some of the most scenic and breathtaking landscapes you’ll ever see, sits a museum with untapped potential. Green River, Utah, a place with 950 residents and no stoplights, is the proud home of the John Wesley Powell River History Museum. Named after the famed scientist and nineteenth century explorer who is credited for leading the first expedition of boatmen down the Colorado River through the Grand Canyon, the JWP Museum (as the locals like to call it) is unlike any other museum I have ever seen. After spending a week amongst peers at the Western Museums Association (WMA) 2014 Annual Meeting, I became even more convinced that while there are surely similarities between my museum and others around the country, the JWP Museum stands alone in the middle of a perfect storm. 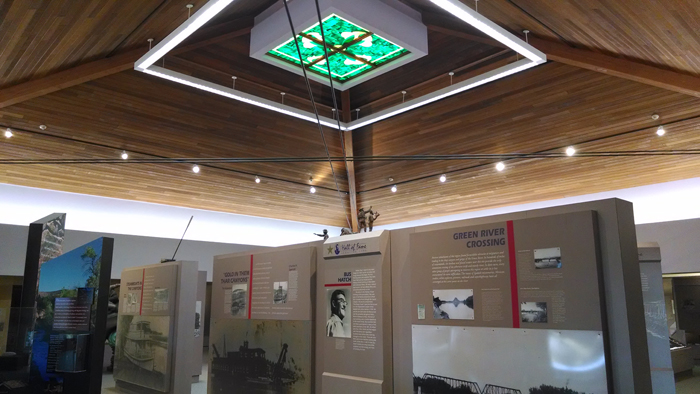 Nearly twenty-five years ago, Green River’s city council, mayor, and stakeholders in the community set in motion a plan to build a brand new twenty thousand square foot museum that would be fully funded through the town’s budget in an effort to attract more tourists from I-70. Let that sink in for a second. Twenty thousand square feet in a town of 950 people. That’s more than twenty square feet per resident. For reference, the Utah Museum of Natural History in Salt Lake City was around twenty-three thousand square feet before they moved into their new facility. Bonkers.

The land for the JWP museum was donated, but that’s about the only thing that came for free. They had no building, virtually no collection, and little background in museum or exhibit design. They had no large donor base or historical society urging them on, and no other river museums that they could try to emulate. The idea that they were pushing forward was something wholly new and visionary, and it was a big risk too.

Against all odds, the result is something astonishingly beautiful. The vision that these folks had in building a museum from the ground up in a town this size is something to applaud. The exhibits were professionally designed, and they tell a detailed and comprehensive story of the history of river culture on the Colorado Plateau. The flow of the building is wonderful. The history is incredibly relevant, and the community that it highlights is largely underrepresented in western museums, even still today. What these residents were able to do without any training or experience in the museum field is enough to make you wonder if we’re wasting our time getting museum studies degrees (I kid, I kid).

As one might imagine, however, the museum has not been the boon to the local economy that those early visionaries might have hoped for. The one thing about museums that no one bothered to tell them is that they don’t make any money.

That’s where I come in. In early 2014, having recently graduated from the University of Utah with an MA in U.S. History, and having cut my teeth at the premier public history organization in the country (American West Center alumni unite!), the city of Green River offered me a job as the first full-time paid administrator to ever step foot in this gem of a museum. They wanted someone to help fix a budget that was continually moving in the wrong direction, manage the staff, and bring more people through the doors. You can imagine the shock I felt the first time I saw the place. “How in the world is this museum in this town?” It doesn’t really make any sense. Small towns just don’t do this. They don’t fund enormous, and well-made museums that highlight unique and untold stories. Small towns piece together trophy rooms of private collections in tiny buildings and call them museums. They don’t make places like this. 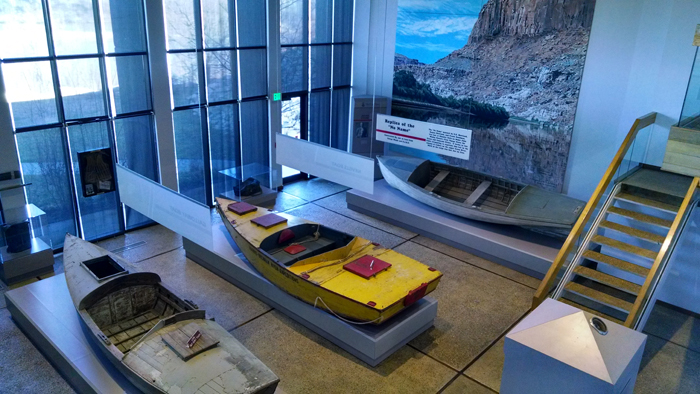 The Boat Room at the JWP Museum, which tells the story of river runners on the Colorado Plateau.

I don’t want to get carried away here. Don’t let me build the place up too much. The reality is that the museum is 25 years old, and has experienced very few updates in those two and a half decades. You can feel the tone of the early 90s as you walk through the exhibits, and some things scream for updates (we have old TV kiosks that buzz so loudly they sound like they’re being powered by miniature laborers who are ready to form a union). There are big holes (not literal holes) in the interpretive exhibits on American Indians. Minorities are almost entirely absent in the story. There are certainly things that need to be fixed, but as a whole, from a design perspective, you can’t help but be impressed with the place. 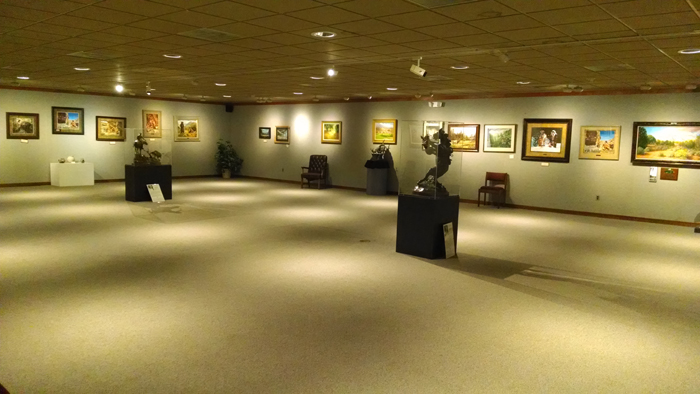 Shortly after taking the position, I began to peel away the onion that is this town, and this job, and began to realize just how much I would be learning about museum administration during these early years as an emerging professional. In many cases, I’ve found that I’m building from the ground up. From creating membership and volunteer programs, managing budgets and employees, strategic planning, grant writing, developing marketing strategies, event planning, curation, and managing collections, I find myself always looking for any opportunity to supplement my professional development with real world knowledge from industry veterans. That’s why the WMA 2014 Annual Meeting in Las Vegas was such a good fit, and why the Wanda Chin Scholarship was such a benefit. The scholarship provided an opportunity to learn from both peers and professionals with decades of experience, that I otherwise wouldn’t have been able to afford. It was an opportunity to meet new colleagues, and to hear about the progress of their respective institutions. Most of all, it was an opportunity to find the other poor souls who were in the same type of situation as myself so we could commiserate and learn from each other. Unfortunately, it seems those folks might not exist after all.

After several days of attending sessions, and networking, and even reuniting with some old friends, it became more and more clear that there aren’t many museums that are in the same situation as the JWP Museum. For instance, I attended a session for rural communities who are trying to attract visitors from larger cities. The rural community that was referenced, however, was a place that is literally 200 times larger than Green River, UT. Unfortunately, this wasn’t an exception in my search for other rural museums. In fact, the smallest museum I came across while at WMA was located in a town of 7,000 people (a mere seven times larger than Green River, whoo!).

That’s not to say I didn’t learn from the folks in the larger institutions. I came away impressed, and with good ideas and personal contact information from institutions in situations much different than mine (institutions that could literally pay for my entire annual budget out of single line item from theirs). I gained valuable knowledge about partnering with the National Park Service, and new ideas about marketing, improving programming, and good methods for rebranding. I became much more familiar with the staff and leadership structure of several institutions throughout the West, which will surely benefit my professional development going forward. However, my experience at the WMA Annual Meeting largely disproved my notion that there were several other institutions like mine.

Surely there are cities with small populations throughout the West with quality museums that are a benefit to their community. In fact, I can think of several in my own state. There are plenty of small-town museums that I look up to, and hope my museum can emulate some day (I’m looking at you Buffalo Bill Center of The West), but even then, their communities are much larger than Green River. All in all, I have yet to find a museum that operates in the perfect storm that the JWP Museum does: city funded, massive and incredibly impressive facility, unique story, almost non-existent donor and volunteer base, a twenty five year history of a lack in leadership, and a city council who is tired of pouring money into a really large building. I’m sure they’re out there. They have to be. In fact, if you’re reading this right now, reach out to me. WE NEED TO HELP EACH OTHER! Or at the very least, we need to host a session at WMA next year. Until then, I’m having a blast figuring this thing out while on my own little island.

Before I took this job, Green River had been sitting on an underutilized commodity, with very few people who could dedicate the time to make sure it reached its full potential. Now I’m working to turn that equation around. My time at the WMA 2014 Annual Meeting was one small step towards turning the tide, but a valuable step, regardless of size. 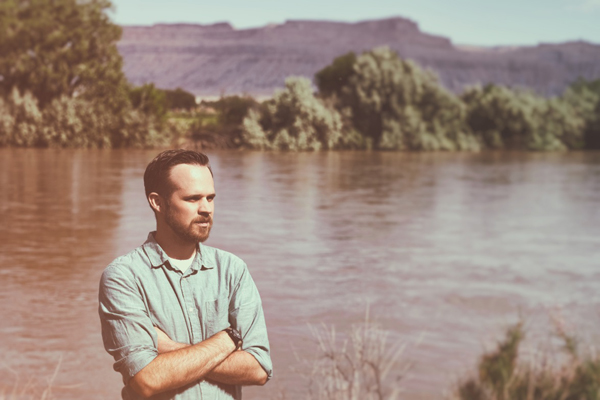 An avid hiker, historian, and musician, Tim has a Master's degree from the University of Utah in U.S. History, with an emphasis on Environmental History. A native of Utah, he's excited for the future of the museum and is working to maximize its untapped potential.

I would say that museum art gallery seems to be really interested. I am glad to know about your learning journey. I also love traveling and love to learn new things about different peoples, about their culture and had great charm of exploring such historical places. I also had explored John Wesley Powell River History Museum through get bus tours once, and love to see its art gallery that contains some of unique collections.