What does cosplay have to do with training the next generation of museum professionals? In the Oakland Museum of California’s (OMCA) What’s Happening California series college students become the heroes of the exhibit development process.

The What's Happening California series is an ongoing collaboration between OMCA and California State University (CSU) campuses across the state. The project goal is to develop an on-going community co-curated presence in OMCA’s Gallery of California History, involve university students in exhibition and collections development, and increase the diversity of stories and artifacts from across the state that are represented in the museum. Over the course of two semesters, OMCA staff work with students to develop a 300 sq. ft. exhibit about contemporary issues in their community. Students choose the topic, conduct research, identify objects for the show, work on labels, develop multimedia, and help guide exhibit design. With the support of the Institute for Museum and Library services, the partnership has so far produced three exhibits in collaboration with public history students in Sacramento, Fullerton, and San Diego.

When OMCA engaged in a major reorganization and reinstallation project, we wanted to make sure that the history we told in the Gallery of California History went right up to yesterday, and we wanted to make sure that co-creation work would be ongoing and visible. The CSU system was a natural partner: with a diverse student body, 23 campuses across the state, and a variety of history and social science programs with exhibit practice components, we found great collaborators in the students and teachers who enthusiastically pitched in, despite some growing pains as the project developed.

The first show, What’s Happening Sacramento?, was co-curated by a public history class taught by Lee Simpson at Sacramento State. Told mainly through first-person labels from the perspective of students and community members, the show presented a selection of diverse stories related to Sacramento’s rivers. It was anchored by exceptional artifacts with compelling personal stories: frogging poles used to hunt frogs on the Sacramento River, bandanas created by women farmworkers who are survivors of abuse in the fields, a kayak owned by the founder of a famous Sacramento kayak triathlon. This show received a Leadership in History Award of Merit from the American Association for State and Local History. 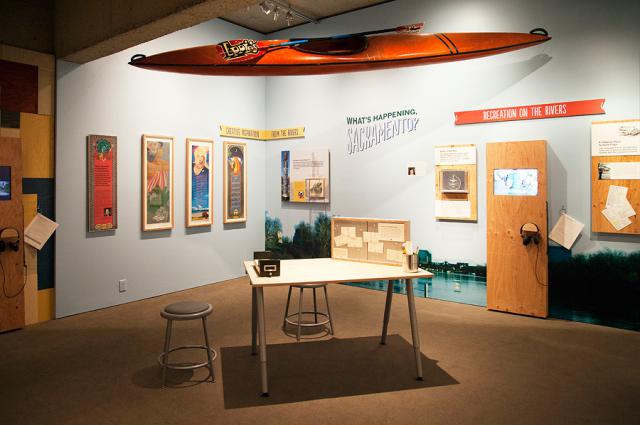 The CSU Fullerton students in Benjamin Cawthra’s public history classes developed a timely, broadly relevant theme for their exhibit, Hard Times in the OC: the 2008 recession in Orange County. In cooperation with the Center for Oral and Public History at CSU Fullerton, they conducted oral histories with community members affected by the recession. They interviewed pink-slipped teachers, anti-austerity Occupy activists, short sale specialists, people who went into debt to keep up with the “OC image,” the director of a group that kept a state park open despite a non-existent state parks budget, people who kept their Disneyland memberships no matter what their financial situations, the director of a Latino/a theater group thriving despite the recession, people who were unemployed and looking for work: in short, a diverse cross-section of the Southland in the 21st century. 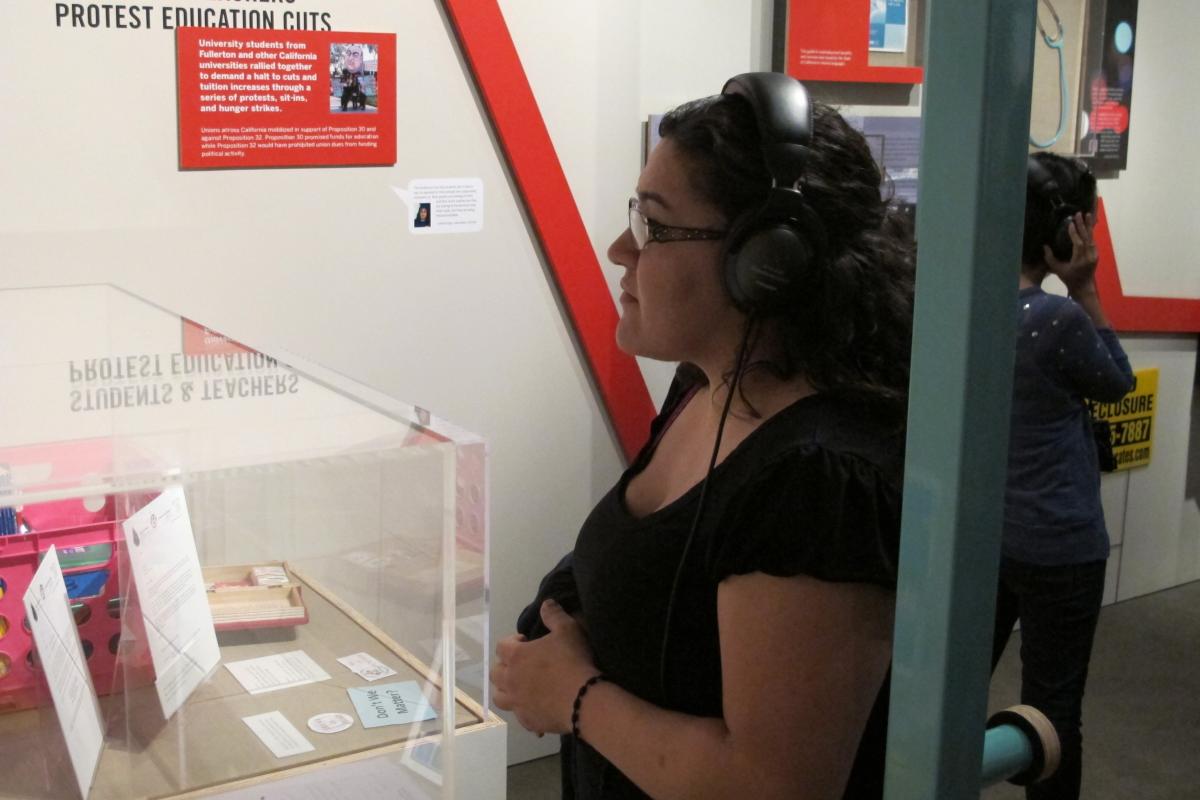 This year, graduate and undergraduate students in Sarah Elkind’s public history classes at San Diego State University developed Sunshine and Superheroes: San Diego Comic-Con, an exhibit on an important contemporary issue in their community: the enormous annual comics convention in their town. The show is about fantasies: personal and cultural fantasies of being a superhero, as well as civic fantasies of the power of a tourist economy. It explores the role of Comic-Con in the way San Diego sees itself; during the con, the city replaces trolley signs with signs in Klingon and other invented languages. We have a Klingon trolley sign in the show. Two costumes help us think about the way Comic-Con and comics represent gender: a fierce Batwoman costume and a more sexualized Harley Quinn costume. The show also explores how comics culture has become mainstream popular culture. The students also developed an interactive experience where visitors can try on costumes and take photos against different backgrounds. 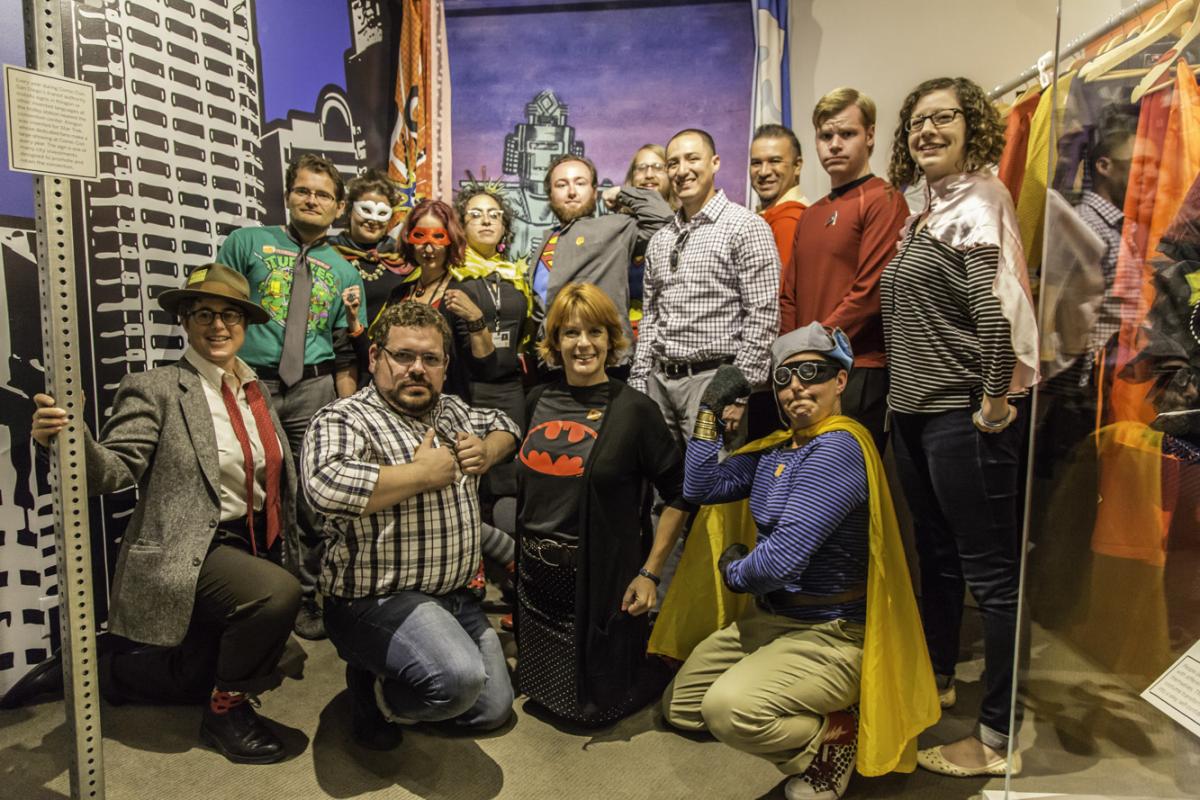 SDSU students and OMCA staff pose in the Sunshine and Superheroes exhibit.

With each collaborative project with CSU students and their local communities, OMCA learns more.  We look forward to learning even more while working with our new partners, an anthropology class at San Jose State University, on a new exhibit this fall. Each project has introduced students to museum work and to the practice of contemporary history. Each project has helped the museum become the “museum of California,” a place where diverse visitors from across the state can see themselves represented in exhibits and programs. Each project is a laboratory for deepening our practice of collaborative work. In this year’s show, it was a laboratory with capes and masks.

Suzanne Fischer is Associate Curator of Contemporary History and Trends at the Oakland Museum of California.