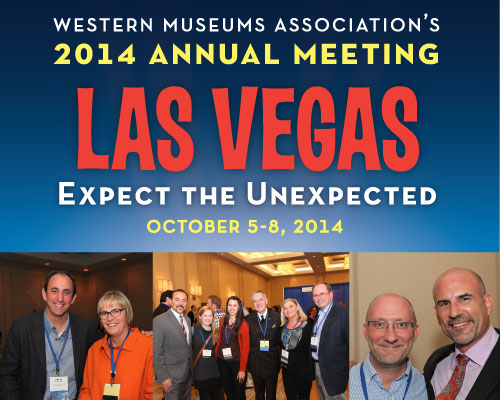 Professional conferences are peculiar gatherings. It took me two conferences to figure out that it’s not important whether your next session is in the Tango or Tierra room. What’s really important is this: once you find the right conference room, whom are you sitting next to? Nobody prepared me for this reality so I will try to save you some time with one tip as you prepare for the Western Museums Association (WMA) 2014 Annual Meeting in Las Vegas.

Here’s the tip: throw out your normal boundaries of social introduction when attending a conference.

It’s easier than you think. Here’s why: similar to speed dating, the hard part usually associated with meeting someone new is already behind you as your fellow attendees have similar interests to your own. The space you occupy has been artificially populated with people who are, relative to the general public, just like you. This almost never happens in real life. This high-frequency opportunity to intersect with similar people is actually at the core, as opposed to a by-product, of why we organize conferences. Take advantage of it.

When you attend a session (and having been on the 2014 Program Committee, I must say there are some great sessions at this year's meeting!), do something you don’t normally do in a restaurant or at the movies: introduce yourself to the person next to you. Open up about why you chose that session. Share your museum’s or department’s challenges. I promise that the other person will be able to relate to what you are saying. Even if you speak to that person for a mere two minutes prior to the start of the session, I encourage you to ask for that person’s business card and give them yours. This is important. I guarantee you will be glad you have it when you get back to your desk. At the very least, you might have a follow-up question about the session you attended. Just keep in mind that the people next to and around you in sessions are not random people. You are all in the same industry and chose to attend the same session. The particular session has something to do with your jobs and therefore your careers, and therefore, your lives. You have a lot in common.

I very much regret being slow to recognize the acceleration of collegial courtship inherent to professional conferences. I missed a lot of opportunities. For instance, while on a bus during the American Alliance of Museums 2011 Meeting in Houston on the way to an evening museum gathering I sat next to a brilliant millennial who created smart phone apps. He knew things like how long people engaged with apps in museums, how many layers they should have, and when an app was too involved and actually detracted from the visitor experience. He knew everything about the subject. At that time I wasn’t professionally interested. I didn’t ask for his card and I still regret that today. I didn’t think that apps were a part of my universe. Now I know better. There have been a couple of times I could have won a cookie in a meeting if I only had his council in my toolbox.

Once I understood the rules, though, I began to make incredible connections. At a lunch at the WMA 2013 Annual Meeting in Salt Lake City, I met a woman from Santa Barbara and another woman from San Francisco. I introduced myself to both and immediately discussed some ideas I had been thinking about for future exhibitions. Both conversations resulted in direct links to works in their or other collections that could conceivably be included in a future exhibition at Sunnylands. I now enjoy many relationships that originated at WMA Annual Meetings. These connections have enriched my experience in my job, in my field, and therefore my life.

WMA Annual Meetings are intentionally constructed to provide a safe and fun space where the foundation for social interactions is well advanced of where you typically begin when meeting new people. In speed-dating rounds it’s okay to cut to the chase. It’s okay to cut to the chase at conferences as well. Don’t make the mistake I made. Try not to think of your fellow attendees as random people. They have chosen to be in the same space as you for reasons similar to your own. Collect cards. Talk to people while you stand in line for coffee. When you see people walking down the street in Las Vegas with the WMA Annual Meeting badge, cross the street to connect.

Anne Rowe is currently the Director of Collections and Exhibitions for The Annenberg Retreat at Sunnylands in Rancho Mirage California. She currently serves as a Board Member of the Western Museums Association, as well as as a City of Palm Springs Art Commissioner. Prior to joining Sunnylands in 2009 Rowe was the President of the Board of Trustees for the Copley Society of Boston, America’s oldest nonprofit art association. Anne has also worked at the Museum of Fine Arts, Boston and The Rose Art Museum at Brandeis University.