As we experience the great American traditions of Super Bowl and the World Series this season, we may not think immediately of American Indians. Yet, most sports fans know about ancient Indian sports, such as lacrosse, as well as about contemporary Native American sports heroes in baseball, track and football. This slice of American life runs deep in Native America. Sports are important on most Indian reservations in the comradery of tribal families matched with a love for competition and skill. Recently, the Barona Cultural Center & Museum opened the exhibition, Sports: The Competitive Spirit. Our exhibitions seek to enlighten our audiences about traditional Kumeyaay-Diegueño life, as well as contemporary life on the Barona Reservation. For our Tribal audience, we seek to bring depth to their experiences and to honor their history and traditions. The Barona Museum is a place where Tribal history is kept alive and meaningful, especially for the Tribe’s youth, and also for posterity, marking the Tribe’s place in the world. 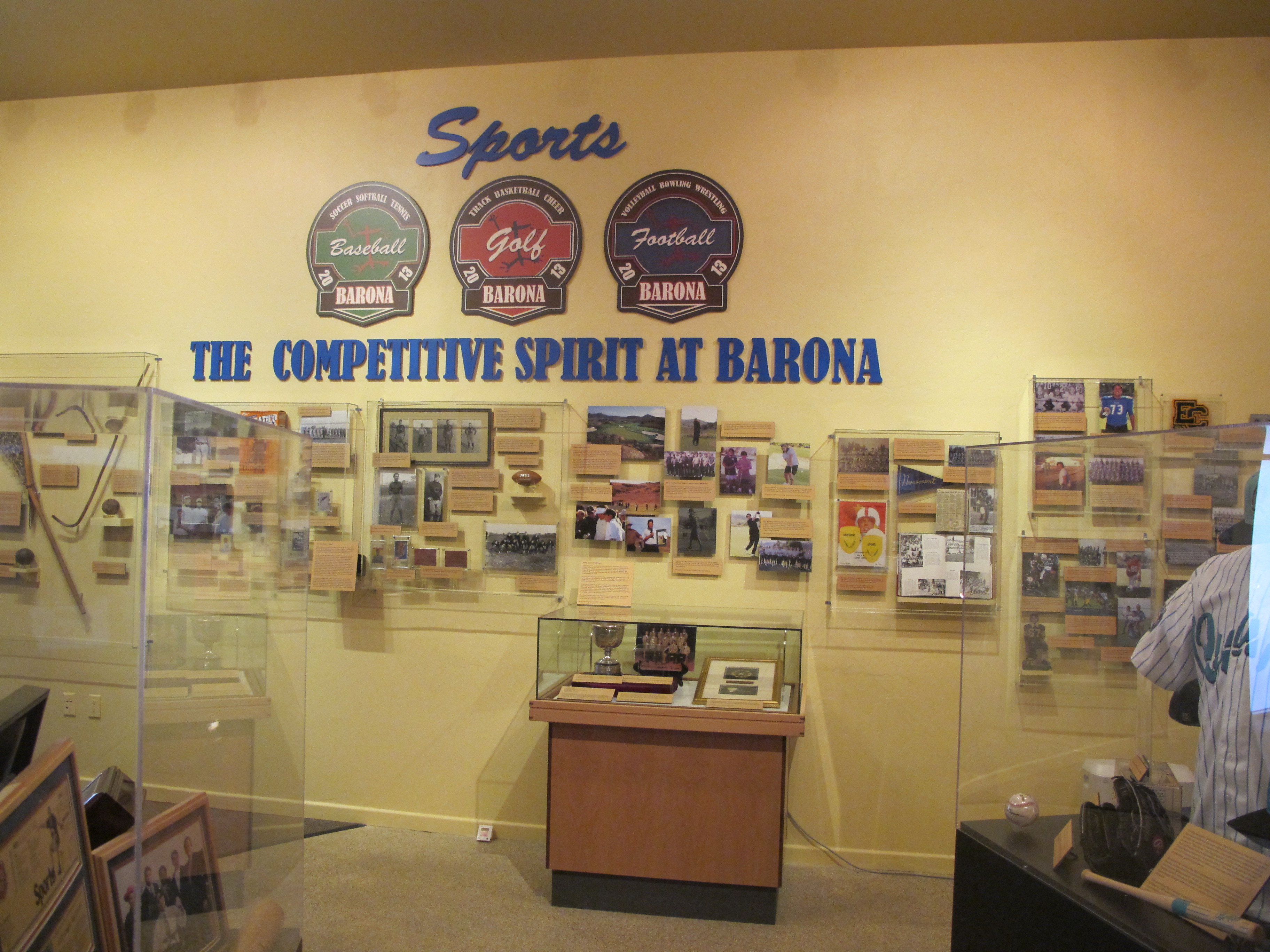 This new exhibition was motivated by the Tribal members after Museum staff asked them what contemporary activities were most important on the Reservation. Sports are the obvious answer. As museum staff, we were well aware of this because of the constant invasion of sports activities into Museum planning. We learned that no big gathering of the People is complete without a traditional game of skill, such as the ancient peon, or the invariable softball or horseshoe tournament. As we plan classes, exhibit openings, culture camp, and meetings, we weave them around the sports activities of the Barona people. So, why not celebrate it?

As we set out to document sports on the Reservation, we realized that every family among the more than 300 Barona Tribal members would contribute; in our estimate this was at least 500 Tribal and Community members. With that daunting number, we began to formally and informally interview the community members who were known to be great sports enthusiasts. Our Curatorial and Collections staff of five managed the call for photographs, names, memorabilia, trophies, and uniforms. Under the direction of Barona Tribal Councilwoman Bonnie LaChappa, Brian Van Wanseele, Tribal member, Recreation Department Assistant Director, and President of Inter Tribal Sports, joined as co-curator with Cheryl Hinton, along with Collections Manager John George, Director/Curator Laurie Egan-Hedley, Archivist Katy Duperry, Curatorial Assistant Jennifer Stone, IT Specialist Erin Payne, and Exhibition Designer Lauren Sopata, to create this ambitious exhibition for our small Tribal Museum. Histories were also collected from local organizations such Inter Tribal Sports, high schools, and historical societies in the area. Yearbooks from 1920s to the present day were scanned and digitally photographed from four major area high schools revealing hundreds of photographs of the Barona People involved in sports. Our result was a Barona Sports Roster of over 200 Tribal community members involved in one or multiple sports, including elders, adults, youth, and toddlers.

We began the time-intensive task of contacting Tribal members to obtain permission to use their photographs found in yearbooks and historical societies. We needed 200 signatures to secure permissions for over 400 photographs. This was not easy. Permission to use family photographs can be a sensitive issue, especially among Tribal members. Family members had to contact their relatives not responding to our phone calls. Staff attended a large meeting of the General membership with a table containing folders of the permissions and associated photographs that needed signatures. Perhaps the most successful method was using texting and social media, such as Facebook, to contact people. Messages would pop up on cell phones and people were most likely to respond immediately. Only a few declined permission, while most seemed delighted that we had discovered their accomplishments. Some of the Tribal members brought in large collections of family photos to give us digital copies. Numerous photographs were inputted and processed; photographs are still being added to the digital roster component. We also had over 39 loans that included institutions and personalities ranging from The Pro-Football Hall of Fame, to Lakeside Historical Society, to Pro Golfer Notah Begay’s private collection.

When you put a call out to the Tribal community for something as common and massive as high school sports, Little League, Pop Warner, cheer, Bobby Sox, and Rez Ball, you must be prepared to be inclusive to all of the families participating. That sensitivity is one that is common to small communities, and especially in the egalitarian tradition among American Indian people for group activities. Families on the Barona Reservation are descendants from groups who have lived together for thousands of years—favoritism impedes the peace. The Museum’s goal is to represent all of the families fairly, in the spirit of Tribal society. The solution was an exhibition that became more of a Tribal scrapbook, with over 125 mounted photographs with descriptive labels and 85 objects ranging from a Tribal member’s West Point competitive parachuting equipment to Pro Golfer Begay’s President’s cup and diamond ring. The solution to include all 200 individuals in some way in the exhibition was to create a kiosk with digital “sports cards” detailing accomplishments along with photographs of activities. Tribal members can look up a name or a sport and find the entries of themselves or their family members in the computer kiosk. Their sports card is then displayed on a large overhead monitor and becomes an exhibit element.

Another interesting aspect of the exhibition is that Tribal members’ accomplishments are placed side-by-side with notable Native American athletes such as Olympian Jim Thorpe, the Athlete of the 20th Century; Notah Begay, winner of the noted President’s Cup in Golf award; Olympian Billy Mills, holder of world records in track set in San Diego; and many others including baseball greats Bender, Meyers, and today’s Jacoby Ellsbury. Great stories emerged including one Tribal member who played center in high school basketball against the future NBA player, Bill Walton. Three Tribal members each had professional baseball tryouts with the San Francisco Giants, the Cincinnati Reds and the San Diego Padres. Straight out of high school, pitcher Matt LaChappa was a second round draft pick for the Padres major league team in the 1990s. Alongside these great accomplishments are the excellent athletes who are stars in their schools, local organizations, and Native American basketball and softball teams for Rez Ball. Rez Ball and Inter Tribal Sports have produced young men and women who have traveled across Native America competing with other Tribes in sports, including some at Barona who received Gold medals at the North American Indigenous Games. These contests produce great Tribal pride and honor, perhaps not unlike the original function of a game such as lacrosse, “the Little War,” where hundreds played on the field at one time, tribe against tribe. 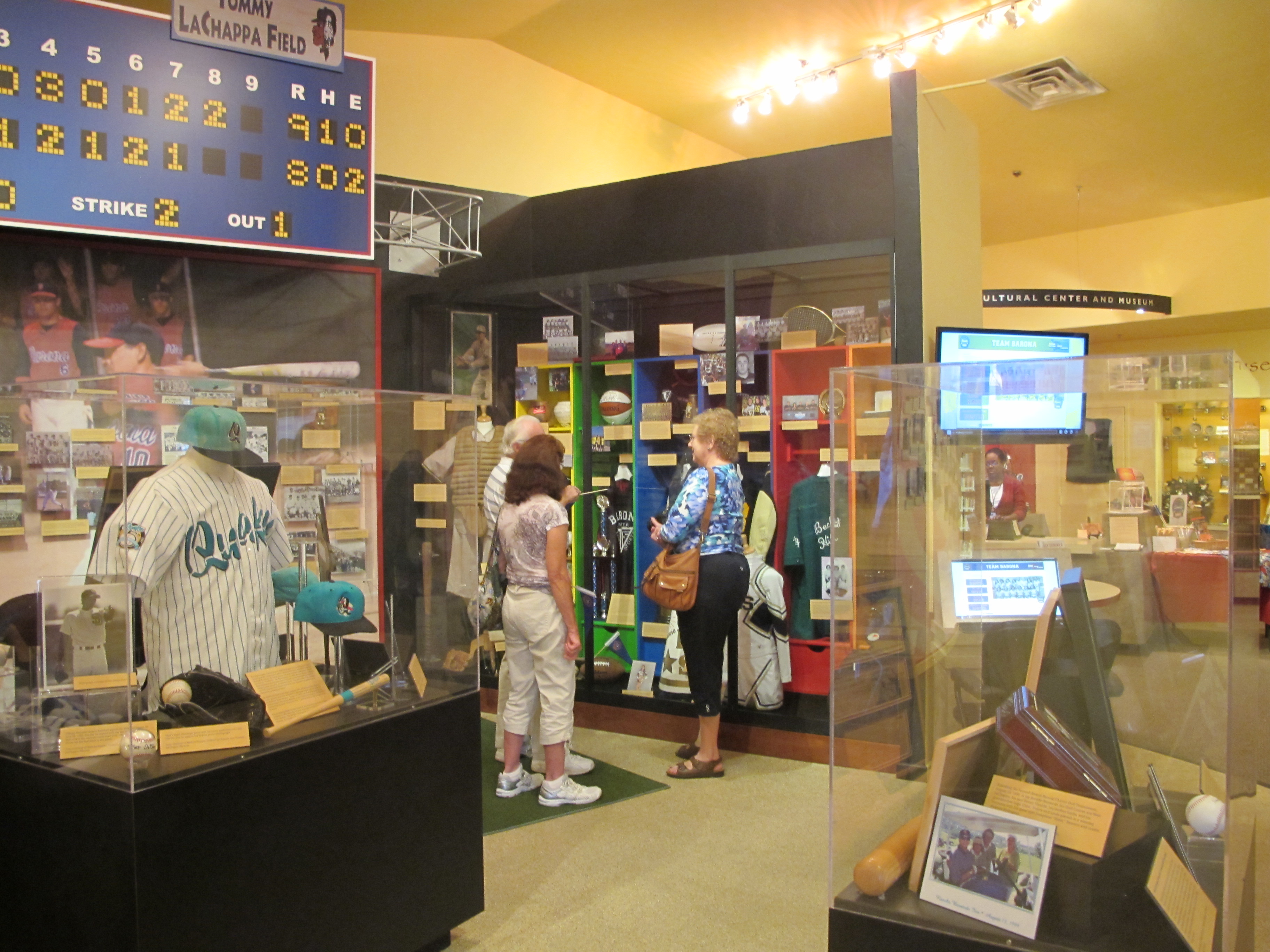 Visitors at the exhibit

Tribal museums are unique in that we have the opportunity to give an insider’s view of the Native American communities we represent. Some of our approaches may not be considered a best practice by other museums. In particular, being totally inclusive and thus taking the chance to have an out-of-control exhibition design with overwhelming information. One might say that the Museum staff answers to over 200 adult voting members of our community. Elected officials, the Tribal Council, as well as a Tribal Museum Committee oversees the wishes of the Tribal community. We are challenged to seek creative ways to include all who wish to be involved with our rather large Board of Directors, from the toddler who won the baby race at the last Field Day to the elder who is known for her 50 years of managing and playing softball. In the world of American democracy, this Native American tradition is about as democratic and inclusive as one can be. Total representation of the community is a best practice in a Tribal museum.

Cheryl Hinton is the Director Emeritus/ Curator of Collections for the Barona Cultural Center & Museum. As Founding Director in 1999, she helped open the facility for the Barona Band of Mission Indians. She received her MA in Anthropology from San Diego State University and is a member of Phi Beta Kappa. Cheryl has served as a Board member and former Vice President of the Western Museums Association since 2007. She serves as a panelist and peer reviewer for two Federal granting agencies. In 2007, Cheryl was named Woman of the Year in Art and Culture by the San Diego/East County Chamber’s Women in Leadership Program. Her former museum experiences include Museum Anthropologist and NAGPRA coordinator at the Palm Springs Desert Museum, First Curator, founding the programming, collections, and NAGPRA coordination for the Agua Caliente Tribal Museum in Palm Springs, and Southwest Curator at the San Diego Museum of Man, also serving as a NAGPRA coordinator. As adjunct faculty at University of San Diego and Grossmont College in Anthropology and Cross-Cultural Studies, Cheryl specializes in Southern California Indians, in archaeology, traditional to contemporary tribal culture; American Indian stereotypes; and repatriation (Native American Graves Protection and Repatriation Act).

Thanks for sharing this. It was fascinating to read about your decision making process!